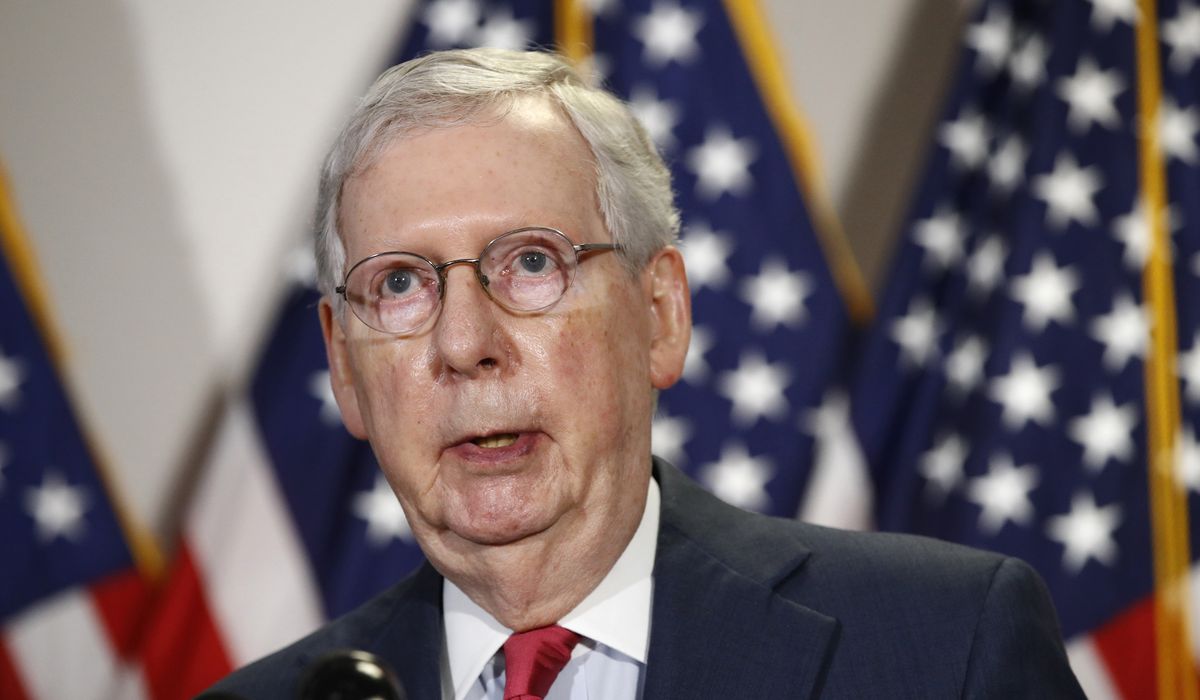 One Nation said Tuesday it would spend $27.3 million on television and radio advertising this summer in six states where Republicans are looking to keep their seats in the Senate.

“As our country faces unprecedented challenges, One Nation will be advocating for commonsense policies to protect families and communities, help struggling workers and businesses, and support our front line health care professionals,” Steven Law, One Nation president, said in a statement. “If we can work together and not play partisan games, we’ll be able to get through this crisis and help Americans get back on their feet.”

One Nation will begin its ad buys in three states on June 23, including $5.3 million in Iowa, $3.9 million in Montana and $10.2 million in North Carolina.

In addition to its television and radio advocacy efforts, One Nation said it has other plans to amplify its message on digital platforms as well.

Thousands of flags adorn the National Mall to mark 200,000 deaths from COVID-19, one of numerous tributes to the lost as the U.S. closes in on a once-unfathomable milestone in its battle with a virus unknown to humans one year ago. The COVID Memorial Project, which describes itself as a group of D.C. volunteers, said… 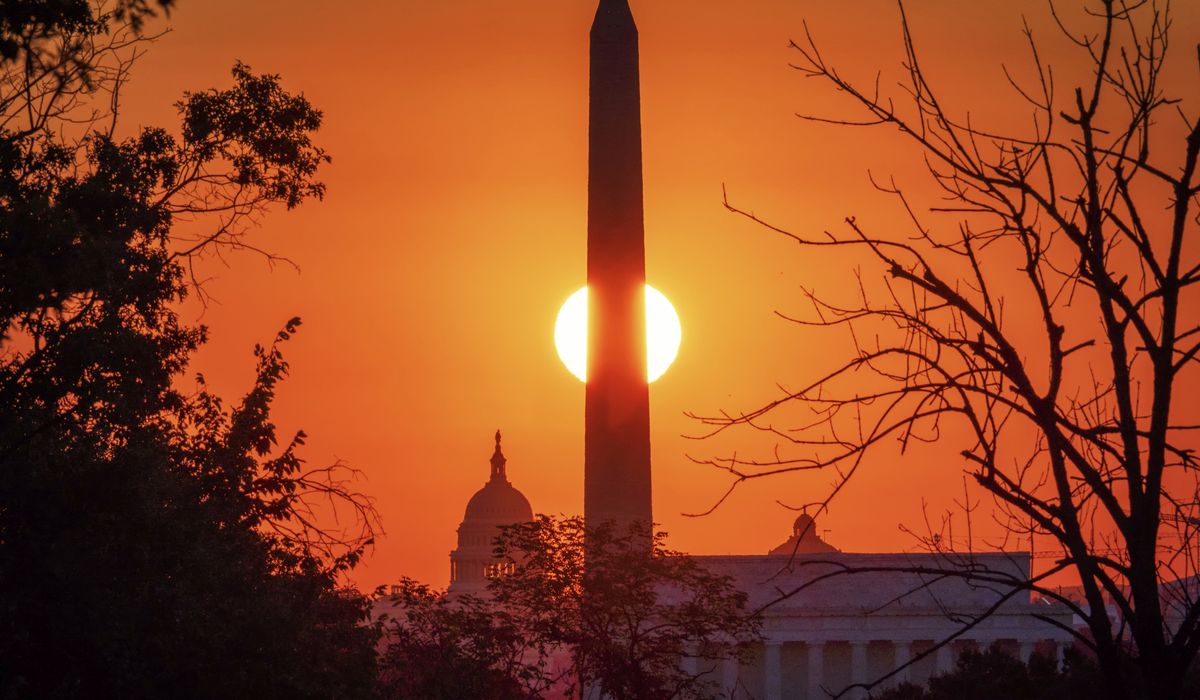 Thousands of flags adorn the National Mall to mark 200,000 deaths from COVID-19, one of numerous tributes to the lost as the U.S. closes in on a once-unfathomable milestone in its battle with a virus unknown to humans one year ago.

The COVID Memorial Project, which describes itself as a group of D.C. volunteers, said it planned to install most of its 20,000 flags — one for every 10 deaths — late Monday and early Tuesday on the Washington Monument grounds facing the White House.

Johns Hopkins University’s closely watched tracker said nearly 199,750 people in the U.S. had died from COVID-19 as of late Monday, meaning the nation would likely hit 200,000 by the end of the day or early Tuesday.

A top government scientist, Dr. Deborah Birx, raised eyebrows in March when she said the death toll would climb to 200,000 even “if we do things almost perfectly.”

Unfortunately, she was right about the toll.

Many critics say the federal response and Americans’ behavior have been far from perfect, kicking off a new round of finger-pointing as the somber benchmark arrives in the middle of an election season.

Some point squarely at President Trump after he acknowledged downplaying the coronavirus early on. The Democratic National Committee is posting photos of signs across the country that say: “Trump lied, 200,000 died.”

He said in a speech in Wisconsin, “200,000 deaths, all across this nation, and it means there are empty chairs at dining room tables and kitchen tables that weeks ago were filled with loved ones — a mom or dad or brother or sister,” the former vice president said in Manitowoc.

“What worries me now is we’ve been living with this pandemic so long we’re risking become numb to the toll it has taken on the country and communities like this,” Mr. Biden said.

“We can’t let the numbers become statistics and background noise, just a blur that we see on the nightly news.”

With six weeks to go until the election, Mr. Biden pinned the crisis — one of the “gravest losses of American life in history” — on Mr. Trump. He faulted the president’s lukewarm support for mask-wearing as he presided over rallies from the podium.

“For Trump, these rallies are about entertainment, adoration and not respect,” he said. “Don’t kid yourself: This is a one-way street.”

The U.S. has roughly 4% of the worldwide population, yet it has accounted for about a fifth of the globe’s nearly 1 million deaths since the coronavirus was discovered in Wuhan, China, in December.

Mr. Trump focused on the economic recovery instead of the death toll during a Monday speech on jobs at Dayton International Airport in western Ohio, where supporters packed shoulder to shoulder in an airport hanger and few wore masks.

The president rejects critics who say he didn’t take the virus seriously. He says he saved millions of lives with travel restrictions early this year and likes to compare his performance favorably with Mr. Biden’s performance as vice president during the H1N1 pandemic in 2009-2010, when an estimated 12,000 died.

“It was a much less lethal situation [in terms of the pathogen itself], but it was handled so badly. They lost thousands and thousands of people,” Mr. Trump told “Fox and Friends” on Monday.

His administration frequently points to travel restrictions, efforts to build ventilators and secure therapies — such as remdesivir — as proof of a competent response to the pandemic.

Mr. Trump also says a vaccine is proceeding at a record-breaking pace and should be available before the end of the year.

There have been signs of progress in the fight against COVID-19. The seven-day rolling average of coronavirus infections in the U.S. stands at roughly 41,000, down from 66,000 in July but far higher than the 22,000 or so in early June — a baseline that experts say is too high.

The U.S. isn’t the only country struggling.

Nations around the world have wrangled with the coronavirus, a formidable and unpredictable enemy, and parts of Europe that controlled the virus early on are showing alarming spikes.

The U.S. is in a “much better position, thankfully,” he said. “We’ve regained control of both of the cases and fatalities. But I think people are worried about Britain and maybe the rest of Europe as well.”

It’s difficult to predict the course of the disease in coming weeks as public behavior changes and scientists get a better handle on how to treat it. Scientists are worried that the virus will spread quickly in the colder months, when respiratory diseases tend to circulate more easily.

Earlier this month, a closely watched model, from the Institute for Health Metrics and Evaluation at the University of Washington’s School of Medicine, forecast 400,000 deaths by Jan. 1 unless Americans become more vigilant about mask-wearing and social distancing.

For now, the country is recognizing the damage that’s been done.

The COVID Memorial Project said it is not affiliated with a larger organization but will have House Speaker Nancy Pelosi, California Democrat, and Sister Simone Campbell of Network, an advocate for Obamacare and other liberal causes, on hand for an interfaith memorial service Tuesday.

“This administration has done nothing to memorialize this stunning number of lives lost — instead choosing to downplay, minimize, and ignore whenever possible,” the group said in a press release. “No flags lowered, no service held, no day of mourning declared.” 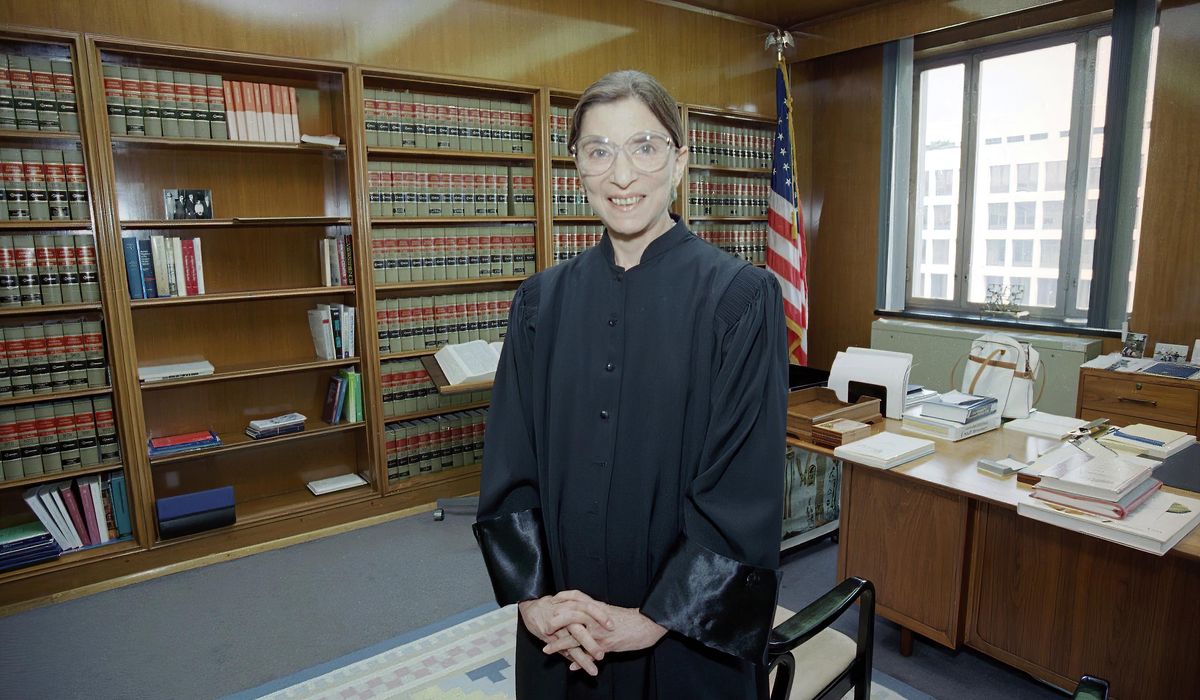 President Trump paid tribute to the late Supreme Court Justice Ruth Bader Ginsburg as a “titan of the law” after her passing Friday night at age 87.

“Justice Ruth Bader Ginsburg served more than 27 years as an associate Justice of the Supreme Court of the United States—notably just the second woman to be appointed to the Court,” the president said in a statement released overnight by the White House. “She was a loving wife to her late husband, Martin, and a dedicated mother to her two children.”

“Renowned for her brilliant mind and her powerful dissents at the Supreme Court, Justice Ginsburg demonstrated that one can disagree without being disagreeable toward one’s colleagues or different points of view,” the president said. “Her opinions, including well-known decisions regarding the legal equality of women and the disabled, have inspired all Americans, and generations of great legal minds.”

“A fighter to the end, Justice Ginsburg battled cancer, and other very long odds, throughout her remarkable life. Our thoughts and prayers are with the Ginsburg family and their loved ones during this difficult time. May her memory be a great and magnificent blessing to the world,” Mr. Trump said.

The president, who said in August that he would “move quickly” to fill any vacancy on the high court, did not address the issue in his statement.

Vice President Mike Pence called Justice Ginsburg “a true public servant.” “Justice Ginsburg led an inspiring life, and her storied career paved the way for women in the law,” Mr. Pence said. “As an advocate and an Associate Justice of the Supreme Court, she was a champion for women whose tireless determination reshaped our national life.”

He said she “will always be remembered as a jurist who respected and commanded the respect of all her colleagues. Karen and I offer our prayers and condolences to the family, friends, and many admirers of Justice Ruth Bader Ginsburg.”

B-52 bombers fly over every NATO nation in show of force to Putin, Belarus

U.S. Air Force B-52 bombers flew in close formation over all 30 NATO countries on Friday to mark the U.S. commitment to the Atlantic Alliance and likely as a warning to hardline leaders like Vladimir Putin of Russia and Alexander Lukashenko of Belarus. Air Force officials said six of the venerable B-52 Stratofortress bombers are… 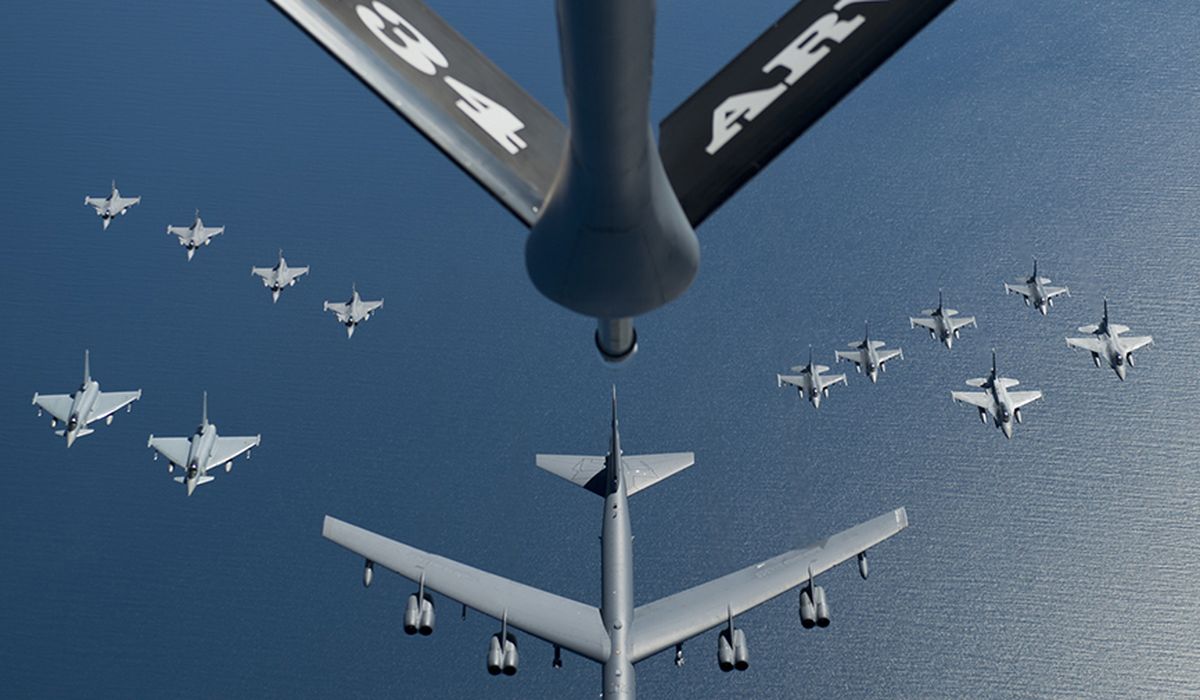 U.S. Air Force B-52 bombers flew in close formation over all 30 NATO countries on Friday to mark the U.S. commitment to the Atlantic Alliance and likely as a warning to hardline leaders like Vladimir Putin of Russia and Alexander Lukashenko of Belarus.

A pair of bombers assigned to the 5th Bomb Wing at Minot Air Force Base, N.D., will fly over Canada and the United States while four B-52s from a Royal Air Force Base in Fairford, U.K., will fly the European portion of the mission.

The bombers will link up with the air forces of several NATO members during the day who will provide fighter escort and aerial refueling.

NATO member states from Belgium to the U.K. are taking part in the bomber drill.

“By further enhancing our enduring relationships, we sent a clear message to potential adversaries about our readiness to meet any global challenge,” Gen. Wolters said.