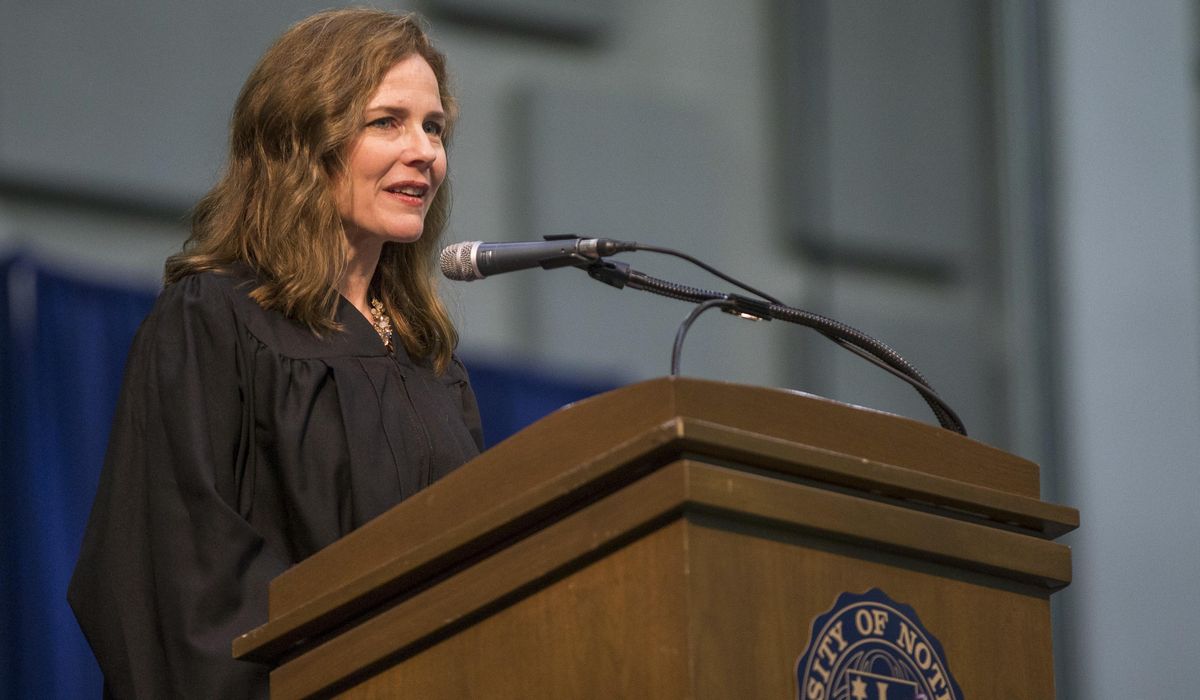 Notre Dame helped launch Judge Amy Coney Barrett’s journey to the federal bench, and the community is going all out to get her confirmed to the Supreme Court.

Eager to see an alumna, professor and fellow Domer on the Supreme Court, members of Judge Barrett’s university community are writing letters of support to senators, picking up her classwork and cooking meals for the Barrett family.

Nicole Garnett, a Notre Dame law professor and longtime friend, said many at Notre Dame dropped everything to attend the formal appointment ceremony at the White House. Among them were the Rev. John I. Jenkins, the university’s president, and Notre Dame Law School Dean G. Marcus Cole.

“It wasn’t again because it was cool — it was very cool — but it was because we wanted to make a showing and let her know how important she was to us,” Ms. Garnett said. “On one-day notice, 19 people from this community, the Notre Dame community, got on a plane and flew to Washington, D.C., at their own expense so that we could be there to support her.”

Ms. Garnett clerked with Judge Barrett at the Supreme Court during their 1998-1999 clerkships and directed Vice President Mike Pence’s office toward then-professor Barrett in 2017 as a top contender to fill a vacancy on the 7th U.S. Circuit Court of Appeals.

Judge Barrett graduated from Notre Dame Law School in 1997 and was teaching civil procedure and constitutional law to a Notre Dame audience smitten with the “Notorious RBG.”

Justice Ruth Bader Ginsburg visited Notre Dame’s campus in September 2016 when the battle over the Supreme Court vacancy created by the death of Justice Antonin Scalia upended the presidential race. Professor Barrett met Justice Ginsburg during her visit ahead of the justice’s remarks to a crowd of more than 7,000 packed into the Fighting Irish basketball arena.

“For reasons completely out of her control, Judge Barrett’s confirmation is sure to be a contentious one. Public discourse is almost guaranteed to escalate to a fever point in one direction or another,” Keith Ongeri, the student bar association president, said in a statement celebrating the nomination. “I hope that Judge Barrett’s nomination is met with the same openness, honesty, and thoughtful deliberation that she extends to her students and cases.”

Since Judge Barrett’s rise to the federal bench, her classes often attracted long lines of students attempting to register despite her smaller course load.

Judge Barrett’s Catholic faith is expected to be a contentious issue for Senate Democrats, who have already signaled opposition to her nomination and refused to meet with her.

Rick Garnett, a Notre Dame professor and Ms. Garnett’s husband, said he does not anticipate the Catholic character of Notre Dame becoming a target of scrutiny in the way that Justice Brett M. Kavanaugh’s high school, Georgetown Preparatory School, did during his confirmation battle.

The Catholic boys school in Bethesda, Maryland, became a target for Justice Kavanaugh’s opponents, who viewed him as entitled and feared that his religion would affect his approach to controversies in the courtroom.

Mr. Garnett said he doubts Notre Dame’s reputation will be similarly assailed, except by its rivals in California and the Midwest.

“I mean, maybe if there are USC fans out there or Michigan fans, they might dislike Amy because she’s affiliated with Notre Dame and she went to Notre Dame,” Mr. Garnett said. “I don’t think the senators will do this because it strikes me as politically pretty stupid.”

Not everyone is a fan of Judge Barrett.

The school has a strong liberal presence that attracted President Obama in 2009 for Notre Dame’s commencement address during his first year in the White House.

Julie Gunnigle, a Democrat running for Maricopa County attorney in Arizona, tweeted that she was a former student of Judge Barrett at Notre Dame Law School and views the judge’s selection as an “extremist pick.”

“In Amy Coney Barrett’s America, women will be prosecuted for abortions, Americans will be stripped of healthcare coverage, we cannot marry who we love, and unions will be gutted,” Ms. Gunnigle tweeted. “While I respect her record on teaching, she is unfit to fill the seat of Justice Ruth Bader Ginsburg.”

Sen. Mike Braun, Indiana Republican, said Democrats’ similar attacks on Justice Kavanaugh’s anticipated jurisprudence lifted him from being in a tightly contested race to winning with room to spare in 2018 so Judge Barrett’s opponents should proceed with caution. Mr. Braun met with Judge Barrett for 30 minutes Wednesday and said he was impressed.

“I think her professional credentials, her education, and mostly her family emphasis knocks it out of the park,” Mr. Braun said.

Those who remain at Notre Dame recall Judge Barrett as an integral faculty member, a tireless member of the school’s parking committee and a professor known for using the movie “My Cousin Vinny” to teach an evidence course.

Ms. Garnett said the faculty suffered a real loss when Judge Barrett’s course load diminished upon her appointment to the federal bench, but their neighborhood continued to benefit from Judge Barrett’s annual organization of the Halloween candy exchange and Easter egg roll.

“I want to emphasize that kind of support and respect and just love is not a function of the fact that she’s famous now. It’s not like ‘Ooh cool, I know this lady and now I can brag about it on Twitter,’” Ms. Garnett said.

“It’s really like these people are amazing, she’s amazing. She’s helped me. How many times have we carpooled together? … And I just want to give back, and I think that’s a real testimonial to how important she is to us at a personal level, not just a professional level in our community,” she said.