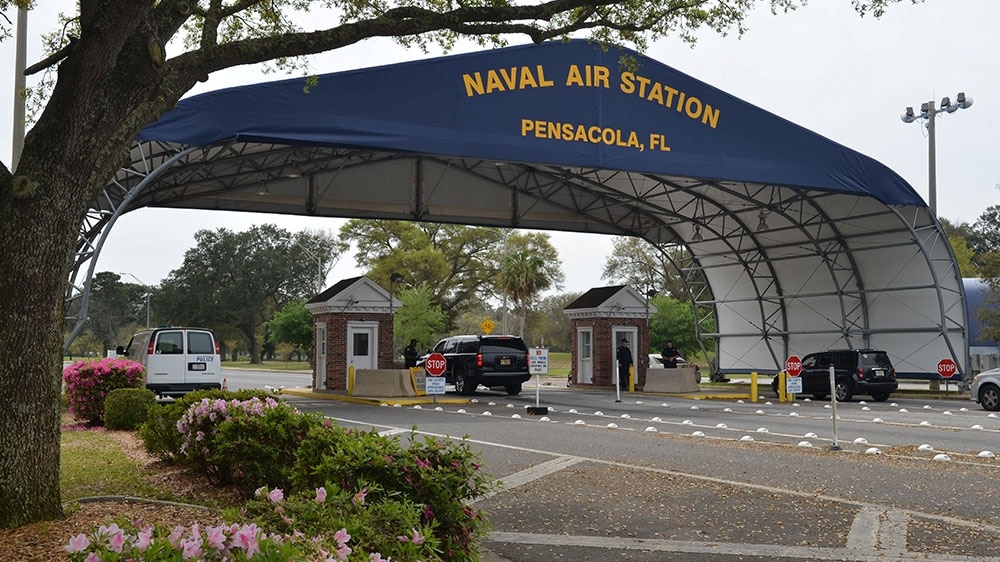 The main gate at Naval Air Station Pensacola is seen on Navy Boulevard in Pensacola, Florida [Handout/Patrick Nichols/US Navy/Reuters]
The FBI has found mobile phone evidence linking al-Qaeda to the December 6, 2019, shooting at a US naval base in Florida in which three people were killed, US officials announced on Monday.
The attacker, Second Lieutenant Mohammed Saeed Alshamrani, 21, had been a member of the Royal Saudi Air Force. He was on the base as part of a US Navy training program designed to foster links with foreign allies, and was killed by law enforcement officers during the attack.
More:

US halts military training for Saudi students after shooting

“The evidence we have been able to develop … shows that the Pensacola attack was actually the brutal culmination of years of planning,” FBI Director Christopher Wray said on a conference call with reporters, adding that evidence showed Alshamrani had been radicalized by 2015.
The Justice Department had previously asked Apple to help extract data from two iPhones that belonged to the gunman, including one that authorities say Alshamrani damaged with a bullet after being confronted by law enforcement.
Speaking on the same call, Attorney General William Barr said Justice Department officials succeeded in unlocking the encryption on the shooter’s iPhone after Apple Inc declined to do so.
“The information from the phone has already proved invaluable,” Barr said.
Law enforcement officials left no doubt that Alshamrani was motivated by anti-American ideology, saying he visited a New York City memorial to the attacks of September 11, 2001, over the Thanksgiving holiday weekend and posted anti-American and anti-Israeli messages on social media just two hours before the shooting.

Separately, al-Qaeda’s branch in Yemen, released a video claiming the attack. The branch, al-Qaeda in the Arabian Peninsula, or AQAP, has long been considered the global network’s most dangerous branch and has attempted to carry out attacks on the US mainland.
In January, US officials announced that they were sending home 21 Saudi military students after an investigation revealed that they had posted anti-American sentiments on social media pages or had “contact with child pornography”.
Barr said at the time that Saudi Arabia had agreed to review the conduct of all 21 to see if they should face military discipline and to send back anyone the US later determines should face charges.

The Syrian refugee on the UK’s coronavirus front lines |NationalTribune.com