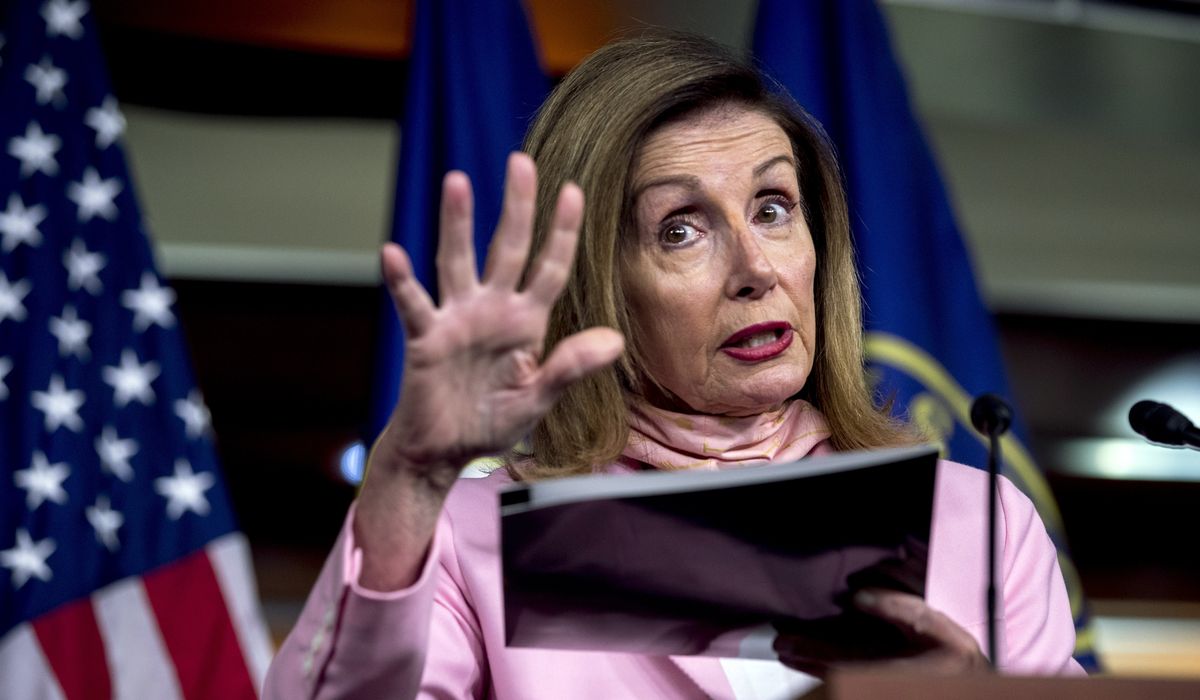 House Speaker Nancy Pelosi on Friday defended including language in a proposed coronavirus relief package that would provide legal protections to banks that service marijuana businesses if enacted.

Mrs. Pelosi, California Democrat, reiterated her support for the proposed marijuana banking protections while responding to a reporter who argued cannabis is not “directly related” to countering the coronavirus.

“I don’t agree with you that cannabis is not related to this,” Mrs. Pelosi responded. “This is a therapy that has proven successful.”

Mrs. Pelosi did not offer any evidence to corroborate her claim, and no published studies have proven that marijuana is effective at treating COVID-19, the contagious disease caused by the novel coronavirus.

The federal government classified marijuana as a prohibited Schedule 1 substance, placing the plant alongside heroin in a category reserve for drugs with no known medical benefit and probe to being abused.

Most states have legalized the medicinal use of marijuana to varying degrees, however, including several that have gone further by permitting adults to possess, use or buy pot for recreational purposes.

But because weed remains outlawed at the federal law, banks and other government-licensed financial institutions are often reluctant to deal with marijuana businesses due to potential legal repercussions.

Lawmakers have previously tried to put in place protections for banks that work with marijuana businesses, but that bill — the Secure and Fair Enforcement (SAFE) Banking Act — has stalled for several months.

Democrats have since inserted the SAFE Banking Act’s language into a $3 trillion coronavirus relief bill proposed in May — the Health and Economic Recovery Omnibus Emergency Solutions Act, or HEROES Act.

“The purpose of this section is to increase public safety by ensuring access to financial services to cannabis-related legitimate businesses and service providers and reducing the amount of cash as such businesses,” reads part of the provision.

“House Democrats are continuing to try and push unrelated COVID-19 wish-list items,” the Senate Republican Communications Center similarly reacted. “All of them should be taken out.”

In addition to providing protections for banks, the SAFE Banking Act’s language also calls for federal regulators and the Comptroller General to study the access to financial services for minority-owned and women-owned marijuana businesses.