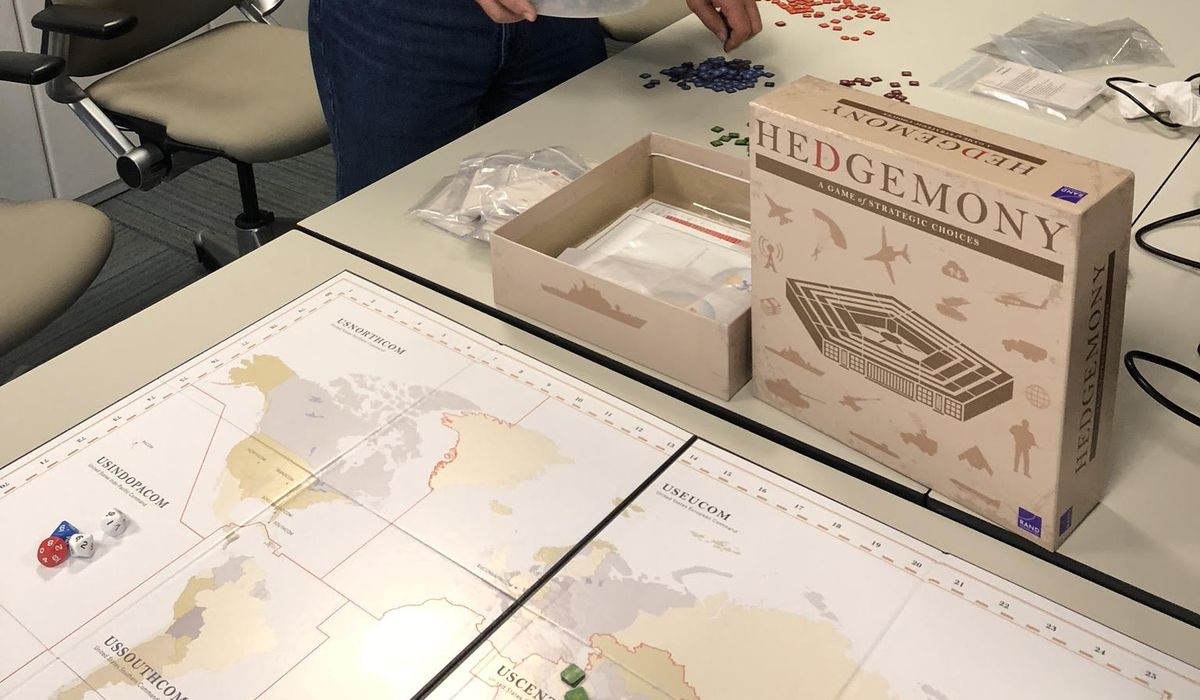 A game meant to teach the Pentagon brass how to counter Russia and China may never replace Risk or Monopoly for a night of family fun, but it could give players a tabletop view of how national leaders make big-picture life and death decisions in an increasingly unsettled world.

The Rand Corp., the federally funded think tank that has been advising the Department of Defense since the dawn of the Cold War, is entering the gamer market. Last week, it released “Hedgemony: A Game of Strategic Choices” to the general public. With a $250 price tag, it’s the first war game Rand has offered for sale outside the government and allows the average gamer to channel his inner Dr. Strangelove.

“It gives a unique, Secretary’s-level view” of the Pentagon and how it makes decisions, Michael Spirtas, associate director of Rand’s International Security and Defense Policy Center and one of the game designers, said Monday in an interview with The Washington Times. The public game is a direct descendant of the exercise Rand set up for the real Pentagon as leaders contemplated a massive shift in U.S. strategy shortly after President Trump was elected.

The unique spelling of Hedgemony is no typo. It’s a play on the concept of the dominant “hegemon” and the need to “hedge” strategic trade-offs among wants, needs and shortcomings when confronting hostile forces in the real world, designers said.

A national “Secretary of Defense” represents the United States, and other “Blue Side” players are U.S. allies. Russia, China, North Korea and Iran constitute the Red Side team. Each player has military forces with clearly defined capabilities and a logistics supply line. Like any other war game, the players outline their strategic objectives and then employ their forces in the face of changing circumstances, opponents’ moves, and constraints such as dwindling resources and time.

“I am resource-constrained,” Mr. Spirtas said. “Every year I get a budget, and the budget will go up and down.”

While he was secretary of defense, James Mattis asked Rand to design “Hedgemony” to help his team craft the Pentagon’s 2018 National Defense Strategy. Such war games can play a critical role in testing assumptions while honing military systems and technologies, said Bradley Bowman, senior director of the Center on Military and Political Power at the Foundation for Defense of Democracies.

“These war games help identify necessary capabilities and capacities, and in the process they help inform the allocation of finite resources,” he said. “War games are essential as the U.S. military conducts its most important modernization effort in decades.”

Many staffers in the Pentagon focus their efforts and attention on a single critical element that can affect a defense budget, such as the force size, readiness levels, modernization or deployment patterns. But the worker bees sometimes lack awareness of the general state of the hive.

“Only the secretary looks overall,” Mr. Spirtas said. “That level of a view is very rarely seen by people — even those who work in the Pentagon.”

Hedgemony’s board game shows a world divided into U.S. combatant commands such as Central Command, the Indo-Pacific Command or the European Command. Chance and uncertainty are factored into play by rolling dice and drawing “event cards” that can simulate random incidents such as a terrorist attack and political upheaval at home or abroad.

“The world is driven by a tremendous amount of uncertainty, and the best way to deal with that is a hedging strategy,” Michael Linick, a senior defense research analyst at Rand who also helped design the game, said in a statement. “Hedgemony forces players to take on a hedging strategy against what might happen in the future and how the future might develop.”

Players use their “resource points.” The U.S. starts with the most, but has the most points on the map to defend, to build up or sustain their military in an effort to acquire more “influence points,” or at least deny them to the other side. Broadly speaking, the players who increase their influence point tally the most are the winners.

Mr. Bowman said war games like Hedgemony are important because China, defined by U.S. defense strategy as the country’s primary strategic rival and potential adversary, is fielding military capabilities not to outpace the U.S. but to target the American military’s strengths.

Rand has been making tabletop war games for Pentagon policymakers since the 1950s. Now, anyone willing to pay $250 can learn how a defense policy that balances strategic goals and a tight budget is made. The boxed version is nearly identical to the game played at the Department of Defense. Development funding was provided by gifts from Rand supporters and operational income.

The writers of the 2018 National Defense Strategy played the game about 30 times, and it sparked a lot of conversation within the group about how to balance resources while crafting policy, Mr. Spirtas said.

“It occurred to us that the game could be an excellent training tool for the next generation of military strategists and decision-makers,” he said.

“It could be a great addition to the curriculum of those responsible for educating students, officers, policymakers or analysts about how to think about national strategy and the military’s role in it,” Mr. Spirtas said.