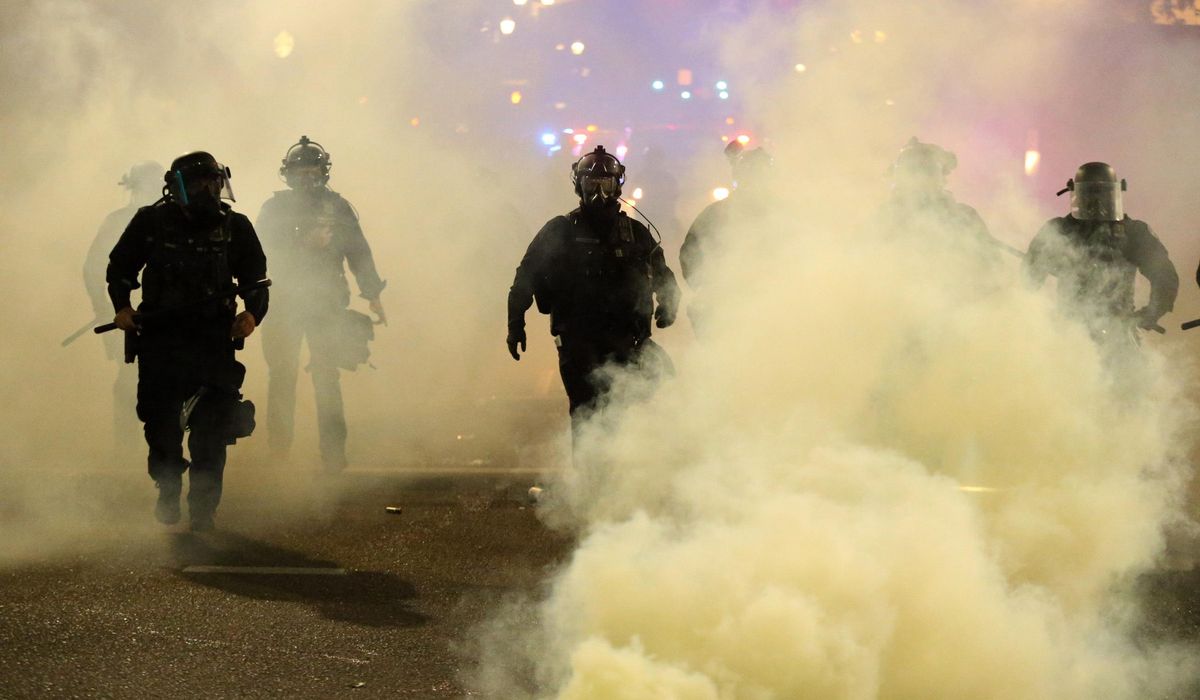 The rush by city and state officials across the country to ban police use of tear gas and pepper spray has law enforcement professionals fearful that police will have to use more physical tactics such as billy clubs and stun guns to disperse rowdy crowds.

William Johnson, executive director of the National Association of Police Organizations, said police would be forced to choose between being overrun or exerting force, potentially deadly force.

“It puts them in a no-win situation,” he said, adding that chemical irritants are “a good option for an officer to have at their disposal.”

In Seattle, Judge Richard Jones this month issued a restraining order that stopped the city police department from using tear gas, pepper spray and other chemical agents. He said officers violated First Amendment rights by using those crowd-dispersal methods on racial justice demonstrators, who the judge said were mostly peaceful.

The chemicals can become problematic during the COVID-19 pandemic because they can irritate the respiratory system, he said. COVID-19 is known to affect oxygen levels and breathing.

“Because they are indiscriminate, they may even spill into bystanders’ homes or offices as they have done before,” Judge Jones wrote in the two-week restraining order, siding with the Black Lives Matter group that brought the lawsuit.

The Seattle City Council went a step further by enacting a one-month ban on the use of tear gas against protesters.

A federal judge in Texas this month imposed a three-month ban on the Dallas Police Department’s use of tear gas and less-lethal weapons on protesters. The restraining order, however, does not stop the department from using the weapons in standoffs or barricade situations.

In Ohio, state House Democrats moved to ban tear gas as part of their policing overhaul legislation. The city of Columbus already prohibited its police from using tear gas and limited the use of pepper spray, which can be dispersed in a more individualized manner.

The Boston City Council is debating bans on the irritants.

John Cardillo, a former officer with the New York Police Department, called the actions “moronic” and “demoralizing” for police.

“They are being punished for things they didn’t do,” Mr. Cardillo said.

He stressed that the irritants have been proved to be nonlethal for decades. Pepper spray is organic and can even be ingested, he said, though it would be unpleasant. Without these agents, he said, police would have to either use physical means to remove protesters or let looting and arson go unchecked.

“If the police don’t have the ability to disperse an illegal assembly, like a riot, then you’ve got shops broken into, burned or looted, which I think is a far greater evil to the community than the admitted discomfort of tear gas,” he said.

Law enforcement advocates objected to the Seattle judge’s citing of COVID-19 concerns because it applies a double standard. They said protesters crowded together in violation of social distancing guidelines.

The unrest in Seattle erupted during nationwide racial justice protests after the May 25 death of George Floyd, a Black man, after a white Minneapolis police officer knelt on his neck for nearly nine minutes during an arrest.

The protest in Seattle morphed into a quasi-revolution when a group of protesters took over roughly six blocks of the downtown neighborhood known as Capitol Hill. They commandeered an abandoned police precinct and declared the area the “Capitol Hill Autonomous Zone.”

President Trump threatened to intervene, but leaders in Seattle, including the mayor, said they had the situation under control.

The legal challenges to police use of chemical agents are also before federal courts.

The American Civil Liberties Union filed a lawsuit on behalf of Black Lives Matter protesters this month against Mr. Trump and Attorney General William Barr. The lawsuit says tear gas and other methods were used to disperse peaceful protesters in Lafayette Square outside the White House to clear the way for the president to walk to St. John’s Episcopal Church for a photo opportunity.

A fire had been started in the church’s basement during riots that weekend as protesters defaced monuments and looted businesses in several areas of the District of Columbia.

The ACLU contends that the protest in Lafayette Square was peaceful and that the Trump administration violated the crowd’s constitutional rights.

“The president and attorney general of the United States ordered the violence,” the group said.

Mr. Barr came under fire from the media and Democrats after he directed law enforcement to extend the perimeter of the park. He said some protesters had become increasingly violent and government buildings had been set on fire and vandalized.

Rioters used crowbars to dig out pavement to throw at officers, resulting in 114 injuries to federal police. More than 20 were hospitalized with serious head injuries or concussions, Mr. Barr said.

“They were not peaceful protesters. And that’s one of the big lies that the media is — seems to be perpetuating at this point,” Mr. Barr said. “The Park Police was facing what they considered to be a very rowdy and noncompliant crowd. And there were projectiles being hurled at the police.”

U.S. Park Police said the protesters were asked three times on a loudspeaker to move back but did not retreat. Journalists in the area confirmed hearing the warnings.

Park Police also said protesters threw projectiles such as frozen water bottles and bricks, and intelligence revealed there were calls for violence against the police.

The case is pending in U.S. District Court for the District of Columbia and is assigned to Judge Dabney L. Friedrich, a Trump appointee.