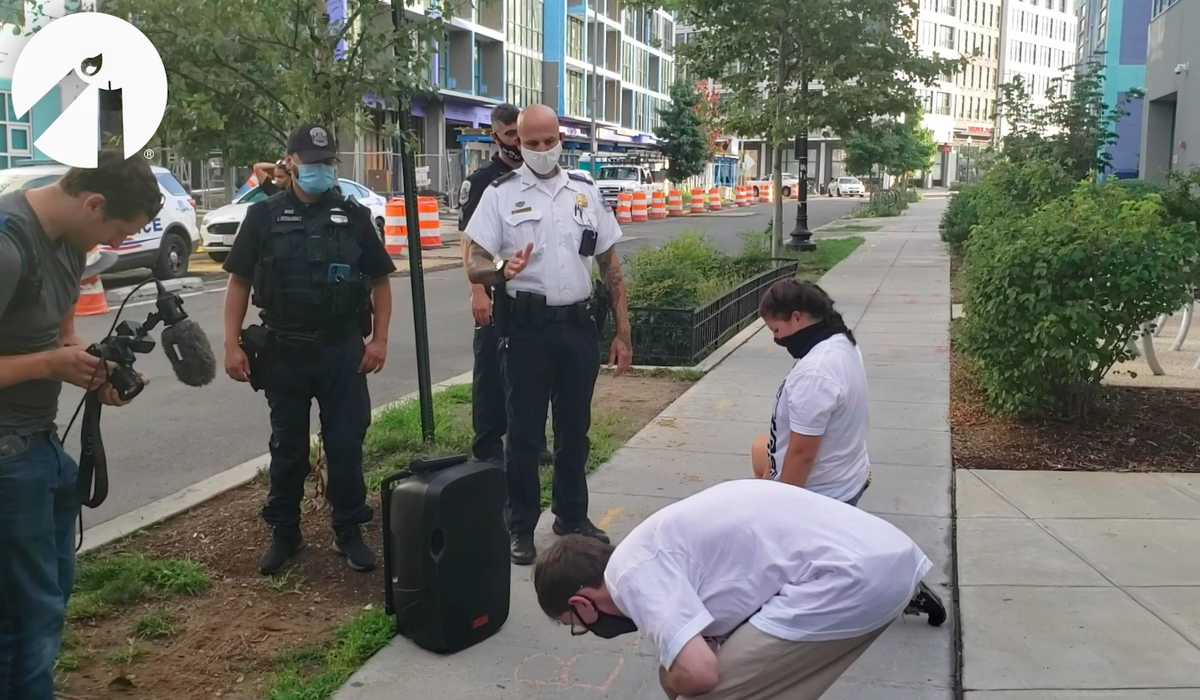 Police stopped pro-life groups Saturday from painting “Black Preborn Lives Matter” on the street in front of a Washington, D.C., Planned Parenthood clinic and subsequently arrested two for writing the message in chalk on a sidewalk, even though the activists said they had the District government’s permission for the street painting.

Students for Life of America leaders said they informed police and city officials during the permit process that they would be painting the message on the 1200 block of 4th Street NE, citing the precedent of the protesters who painted “Defund the Police” in June on 16th Street NW.

“We were told verbally that we would not be prevented from painting and what kind of paint to buy,” said Students for Life spokesperson Kristi Hamrick in an email, adding that the group was told to use non-permanent tempera paint.

Even so, video released Saturday morning showed officers telling two activists from Students for Life to stop writing “Black Preborn Lives Matter” in chalk on the sidewalk in front of the Planned Parenthood facility, and then arresting them when they refused.

Alaina Gertz, spokesperson for the Metropolitan Police Department, said that the group had obtained a permit to hold a rally in front of the Planned Parenthood facility, but not to paint the street.

“MPD did not issue a permit to paint a message on the street,” she said in an email. “MPD issues permits to assemble. Any markings on the street would have to be permitted by the DC Department of Transportation.”

Arrested and released were Warner Depriest, 29, of Southeast D.C., and Erica Caporaletti, 22, of Highland, Md., both of whom received citations for defacing public property.

WATCH NOW:We are in front of Planned Parenthood right now rallying with Black pro-life leaders to decry Planned Parenthood’s past and present racism. Some of us were arrested as we attempted to paint and chalk “Black Preborn Lives Matter.”https://t.co/KMneo26NLv pic.twitter.com/1H5ZiI6S5t
— studentsforlife (@StudentsforLife) August 1, 2020

In a statement, SLA president Kristan Hawkins said that “D.C. Mayor Muriel Bower has made her motives clear as she apparently only thinks that SOME Black Lives Matter and that only SOME slogans are allowed to be painted on streets.”

“After applying and receiving our permit for this event today, after being told by the Metropolitan police that the Mayor has quote ‘opened a Pandora’s box’ by painting public streets, we arrived to find six police cars threatening to arrest our team and students if they painted, even using the tempura [sic] paint we bought that the Police Department specifically requested,” said Ms. Hawkins.

“When we asked if we could at least use sidewalk chalk to chalk our anti-violence message on the streets, the police threatened to arrest us,” she said.

The pro-life groups held the press conference anyway, an event that included Dean Nelson of the Frederick Douglass Foundation and Cherilyn Brice Holloway of Pro-Black Pro-Life.

During the arrest, Mr. Nelson and others told police that activists show up every Saturday to write “Black Preborn Lives Matter” on the public sidewalk in front of the facility.

“Every Saturday people are here chalking and you’re taking young people and arresting them simply because they’re putting ‘Black preborn lies matter’?” said Mr. Nelson, using a megaphone. “You’ve got to be joking!”

Last month, Judicial Watch sued Ms. Bowser and District officials after they failed to give a “substantive response” to the group’s request to paint on the street in front of its headquarters, “Because Nobody is Above the Law!”

In its July 1 lawsuit, Judicial Watch said that it was unable to find a permit issued to paint “Black Lives Matter” or “Defund the Police.”

In addition, “no process or procedures exists to request a permit to paint an expressive message on the surface of a District street,” said the lawsuit filed in U.S. District Court for the District of Columbia.

The District Department of Public Works told Fox5 that the “surprise message painted by activists next to DC’s massive BLACK LIVES MATTER mural will not be removed,” the station reported June 7.