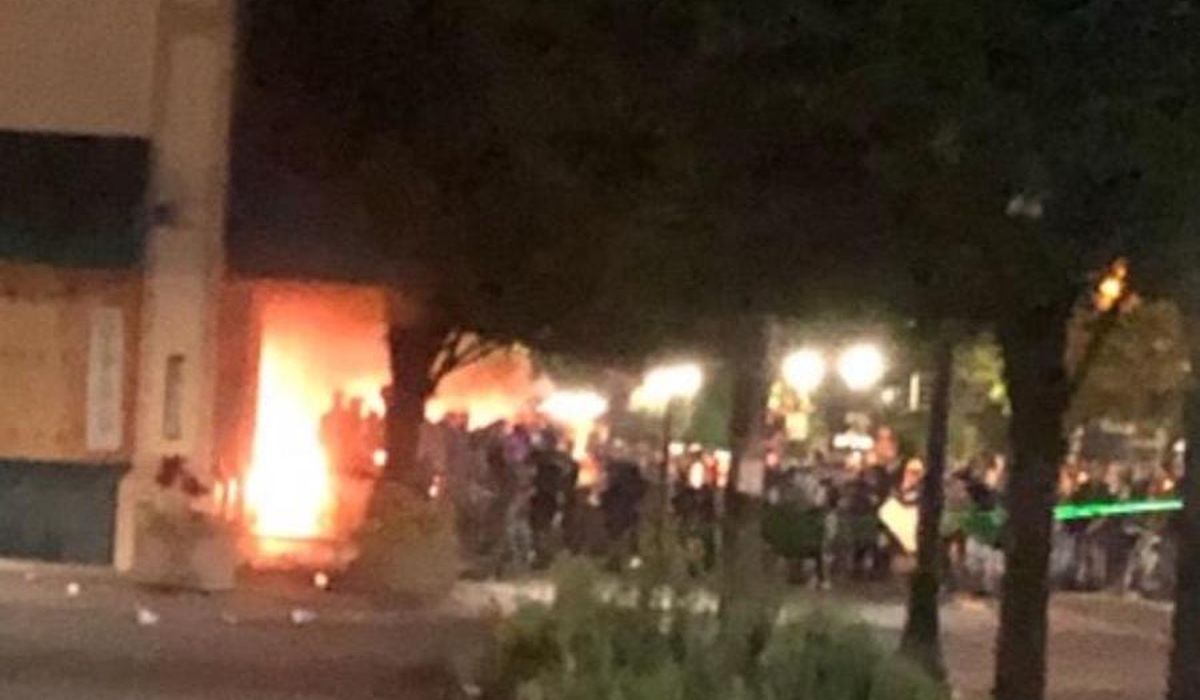 Black community leaders decried Friday the protesters who wreaked havoc on a predominantly minority Portland neighborhood in an attempt to set up a Seattle-style autonomous zone, telling the rioters to “get your knee off our neck.”

Protesters were thwarted as they tried to build a fence around the North Precinct, but instead set fires, looted and vandalized the surrounding buildings, at one point blocking and nailing shut exit doors so that police and others inside the precinct were trapped.

At a Friday press conference, community leaders said that all the Northeast Portland businesses damaged in the melee were minority-owned.

“Get your knee off our neck. That is what you are doing when you do stuff like this,” said J.W. Matt Hennessee, pastor of the Vancouver Avenue First Baptist Church of Portland. “If I were to walk in your neighborhood — because 95% of you are White — just showing up would cause calls to the police bureau. I don’t have to set anything on fire, all we have to do is show up.”

He added: “And you think you’ve got the privilege to come into our community and start knocking out windows and doors? You’ve got something totally messed up.”

“Numerous officers” were injured, with most suffering minor injuries, as protesters threw bottles, fought with officers, shot police shields with paintballs and launched a mortar onto the roof of the North Precinct.

Police responded by deploying CS gas, a form of tear gas, which prompted criticism from mayoral candidate Sarah Iannarone, who said the fumes wafted in some people’s homes and caused them “discomfort.”

“I thought we banned the use of tear gas? If we haven’t, why the hell not? This is insanity,” tweeted Ms. Iannarone, who is challenging Portland Mayor Ted Wheeler in the November runoff.

The protest’s objective was apparently to erect a fence around the precinct building, much like protesters in Seattle did earlier this month in the so-called Capitol Hill Organized Protest zone, or CHOP.

“Demonstrators arrived with supplies to build a fence and began erecting one which stretched from the south side of North Precinct to the north side of the Boys and Girls Club,” said the department, adding that the tactics were “more aggressive and violent than those seen in past weeks.”

Police did not mention Antifa, but Portland journalist Andy Ngo, who posted video and photos of the rioting, described the protest as an “Antifa riot.” The extensive graffiti included typical Antifa messages, including “The only good cop is a dead one,” “ACAB,” or “All Cops Are Bastards” and the anarchist “A.”

Photos of the aftermath of last night’s violent antifa riot & arson attacks at & near the @PortlandPolice North Precinct.They sprayed graffiti saying, “Protests are effective when they are expensive” and “Capitalism kills.” pic.twitter.com/Qad63paIg1
— Andy Ngô (@MrAndyNgo) June 26, 2020

At the press conference, Mr. Wheeler said that “I’m going to speak to my fellow members of the White community: if you were here last night, and you participated in what happened here … you have made a horrible, horrendous miscalculation.”

“You have distracted from the importance of this nationwide movement that seeks justice and racial equity for Black people in America,” Mr. Wheeler said.

Portland Police Chief Chuck Lovell, who is Black, called the actions “not only reprehensible, but they’re evil.”

“Barricading a building and setting fire to it with people inside … and the acts that have been going on throughout this city while regular Portlanders are asleep [are] reprehensible, and it needs to stop and stop today,” Chief Lovell said.

Several speakers said that the protest violence had distracted from the push to address systemic racism and implement police reform, with some calling the destruction “terrorism.”

Added Lionel Irving of MenBuildingMen, which seeks to reduce street violence: “We cannot allow those guys to steal the narrative.”

“Get your knee off our neck” refers to the death of George Floyd, a 46-year-old Black man who died May 25 after a White Minneapolis police officer knelt on his neck for nearly nine minutes, spurring a national outcry against police brutality and racism.