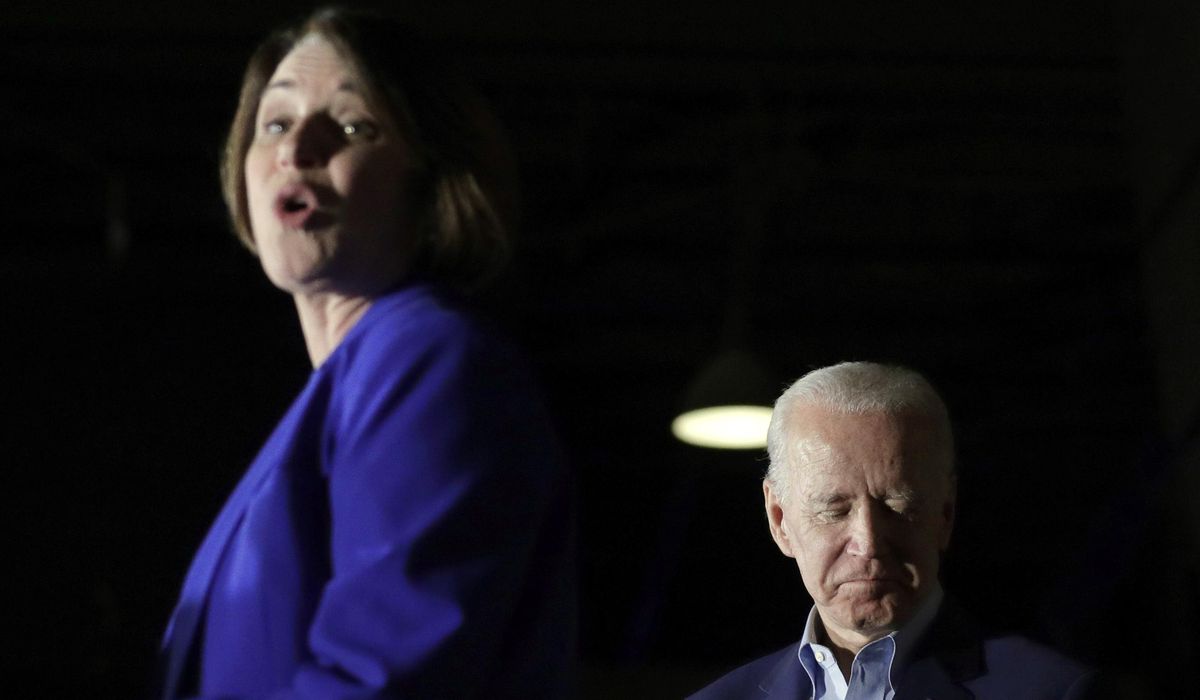 Oddsmakers dropped Sen. Amy Klobuchar’s chances to become the Democratic Party’s vice presidential candidate overnight, with bettors now looking at a 7/1 chance she gets the nod, according to an international online gambling service.

US-Bookies, which provides “betting intelligence to gamblers” in 35 different countries, lengthened Ms. Klobuchar’s odds in response to news reports Thursday that she passed on earlier opportunities to prosecute the Minneapolis police officer involved in the death of a black suspect there Monday.

Ms. Klobuchar is being vetted by the campaign of presumed Democratic presidential nominee Joe Biden, who has previously vowed to select a woman as his running mate. She is one of three Democratic senators who also launched presidential campaigns in 2020 before dropping out of the race.

“A lot of recent criticism has been directed at Klobuchar for her time as a Hennepin County prosecutor when she apparently declined to prosecute officer Derek Chauvin for an incident in 2006,” said US-Bookies analyst Alex Donohue.

Ms. Klobuchar’s team has pushed back against that narrative, which first gained traction Thursday through a variety of left-wing media outlets. The shooting incident in question occurred in October 2006, weeks before the end of Ms. Klobuchar’s time as Minneapolis’s top prosecutor, and it was her successor who took the case to a grand jury.

Mr. Chauvin, who was arrested Friday, was immediately fired along with three other officers who were filmed arresting George Floyd, a black man suspected of passing a counterfeit bill at a nearby supermarket. Despite Mr. Floyd being handcuffed on lying face down in the street, Mr. Chauvin knelt directly on his neck for several minutes as Mr. Floyd protested that he could not breathe.

Riots in the aftermath of Mr. Floyd’s death have left hundreds of businesses in Minneapolis burned out and looted, while violent protests have also begun to flare in other U.S. cities.

“Many are suggesting this is a reason Joe Biden should not name Klobuchar his running mate, and the odds certainly indicate that her chances of being selected have taken a hit,” Mr. Donohue said.

The favorite for Mr. Biden’s choice among bookies remains Sen. Kamala Harris, herself a former prosecutor in her home state of California, according to odds analyzed by US-Bookies. Ms. Harris improved slightly as Ms. Klobuchar fell, moving to 6/4 from 6/5 odds.

Massachusetts Democratic Sen. Elizabeth Warren rounds up the top three contenders, according to oddsmakers, with money on her pick currently seeing a slight uptick from 13/2 to 5/1 odds.

Overall, bettors still favor President Donald Trump to win re-election, but Mr. Biden’s chances have also improved a fraction, according to US-Bookies‘ aggregations. Punters can find action on Mr. Trump with 20/23 odds to win, while Mr. Biden’s chance is being offered currently at 11/10.

Mr. Trump has a 48.6% chance to be reelected, while Mr. Biden stands at 43%, according to the gambling site’s live election tracking which uses U.K.-based betting services among the world’s biggest in terms of volume. Those findings correlate with several other professional gambling oddsmakers, who have kept Mr. Trump a favorite while Mr. Biden has seen some improvement

The two are likely to move into a dead heat soon as Mr. Biden is expected to get a short-term positive bump when he names his vice presidential pick, Mr. Donohue predicted.

“It’s likely that Biden and Trump will both even out to be 1/1 by the end of this weekend,” he said.

Bookies believe the 2020 U.S. presidential election will be the biggest non-sporting gambling event in history. Already, some $90 million has been wagered on it in the UK alone, and globally an estimated $500 million is expected to be wagered on the outcome.

That means the 2020 election has already attracted more action than four years ago. The 2016 U.S. presidential election saw $50 million in betting in the U.K., the same amount risked on the Brexit vote there that same year.

Ms. Klobuchar’s initial denouncement of what transpired with Mr. Floyd was greeted as tepid by some liberal critics. On Friday afternoon, her office announced she had joined some two dozen lawmakers in calling for an investigation by the Justice Department “into the patterns and practices of racially discriminatory and violent policing in the Minneapolis Police Department.”