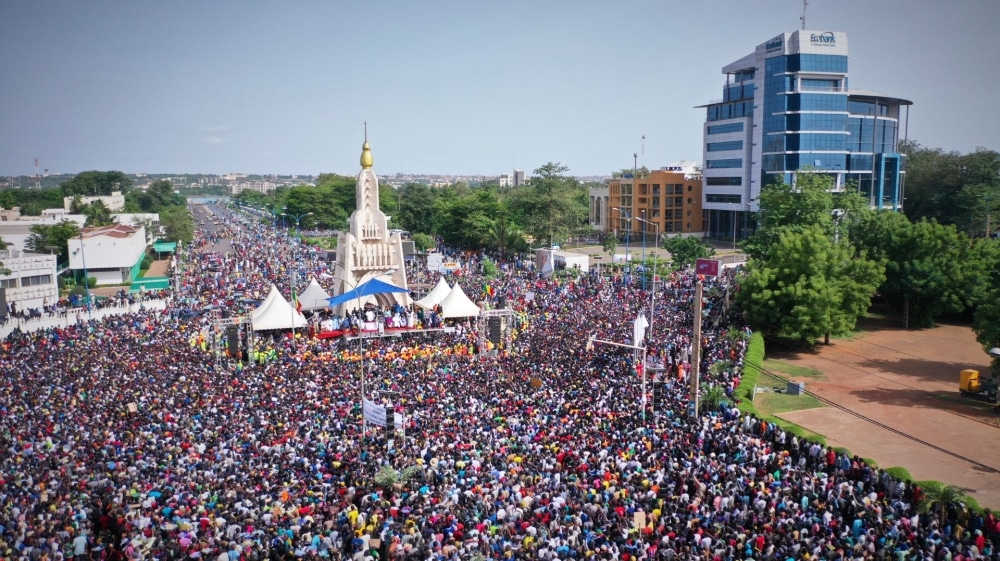 Large crowds have once again poured onto the streets of Mali’s capital, Bamako, continuing the so-called “Movement of June 5” and renewing demands for the resignation of President Ibrahim Boubacar Keita.
Those gathered on Friday were heeding the call of the country’s newly resurgent opposition and were supported by Mahmoud Dicko, a prominent religious leader whose political star has been rising amid growing unrest over the devolving security situation in the northern and central regions of the country.
More:

The Sahel: Key things to know as security crisis spirals

Thousands of soldiers and civilians have died, and hundreds of thousands have fled their homes amid attacks that have increased fivefold since 2016 and have spilled into neighbouring Burkina Faso and Niger.
Mali has spiralled into the violence – which involves an amorphous array of al-Qaeda and ISIL (ISIS) affiliated groups, ethnic militias, and state, regional and international forces – since Tuareg separatists in the north briefly seceded from the southern-based government in 2012. Keita was elected the following year and won a second five-year term in 2018.
However, protesters’ grievances extend beyond the conflict, with the anaemic pace of political reforms, a tanking economy and a widely shared perception of government corruption have also fed anti-Keita sentiment.

What a crowd in Bamako… despite concessions made by #Mali’s president, the protest continues with some threatening to match to the presidential palace https://t.co/mUavOmDRMW
— Nicolas Haque (@nicolashaque) June 19, 2020

During Friday’s demonstration, an imam led gatherers in a prayer in a central city square, followed by protesters singing the national anthem and blowing vuvuzela horns. Many displayed placards bearing anti-government slogans.
The protests followed a similar rally on June 5 organised by a newly-formed coalition of opposition groups. prompting a coalition of religious leaders and civil society figures to call the protests the “Movement of June 5 – Rally of Patriotic Forces”.
‘He hasn’t learned his lesson’
Keita, 75, has been pushed to make several concessions in recent days in response to mounting criticism, such as raising the salaries of public teachers after a long-running pay dispute. He also pledged to enact many reforms, including forming a new unity government that would include opposition figures, noted Al Jazeera’s Nicolas Haque, who has reported extensively on Mali.
But his efforts to appease opponents appear to have fallen flat.
“We have thousands of people on the streets of Bamako protesting, asking, once again, for Keita to resign,” Haque said. “So it seems the concessions that the president made – raising the salaries of teachers, suggesting that he would dissolve the newly elected national assembly and the constitutional court, calling for a national unity government – were not enough to quell the crowd of protesters.”

Dicko had earlier told reporters in Bamako that Friday’s protest would go ahead come what may.
“He hasn’t learned his lesson, he doesn’t listen to people,” he said. “But this time he will understand.”
Mamadou Diakite, a 42-year-old teacher who protested on Friday, told AFP news agency that Keita had to step down.
“We are here for the final victory, there is no negotiation possible,” he said.
The sharpening political divide in Mali is worrying the country’s neighbours, who fear further instability could further inflame the already volatile situation, which has cast Burkina Faso and Niger into crisis and threatens to reach further south into the coastal West African countries.
Continue Reading…

US Caesar Act could bleed Lebanon for years to come |NationalTribune.com