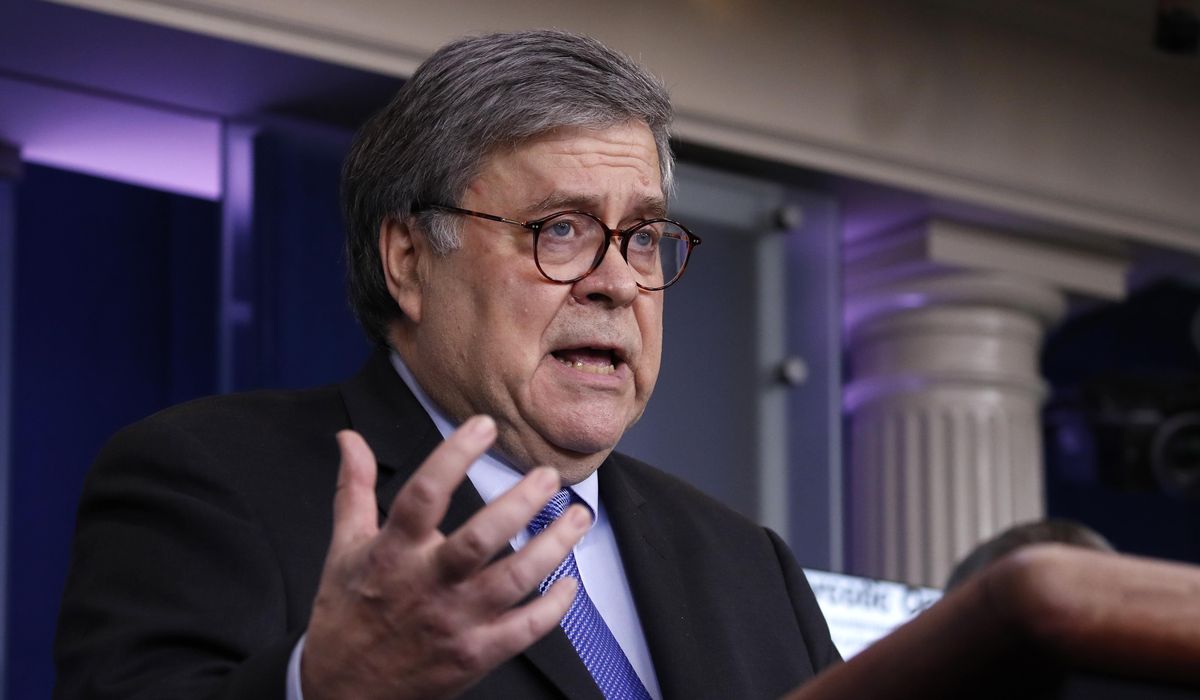 Two members of President Trump’s Cabinet dismissed the notion there is systemic racism across police departments on Sunday.

“I do not think that we have a systemic racism problem with law enforcement officers across this country,” Acting Secretary of Homeland Security Chad Wolf told ABC’s “This Week” on Sunday.

He acknowledged some law enforcement officials may abuse their jobs.

“I would say that there are individuals in every profession across this country that probably abuse their authority and their power. We need to hold them accountable,” Mr. Wolf added.

Attorney General William Barr shared the same sentiment on Sunday during an interview with CBS’s Face the Nation, suggesting institutions in this country have been reformed since 1960.

“I think there is racism in the United States still, but I don’t think the law enforcement system is systemically racist,” Mr. Barr said. “I understand the distrust, however, of the African American community given the history in this country.”

He noted that for most of U.S. history, institutions in America were explicitly racist but they have been being reformed since the 1960s.

The issue of racism within law enforcement has been brought to the forefront during weeks of protests and riots in the aftermath of the killing of George Floyd, a black man, by a white police officer in Minneapolis over Memorial Day weekend.

The video with the officer’s knee on Floyd’s neck for several minutes was caught on video. The officer has since been charged with second degree murder.

Rep. Val Demings, Florida Democrat, who is a former Orlando police chief, said if America’s problems are to be solved, leaders have to be painfully honest about fighting systemic racism.

“We know that it has reared its ugly head in law enforcement agencies, in housing, in education, and in too many other places,” she told ABC on Sunday. “We have a lot of work to do and systemic racism is always the ghost in the room.”

The news media has launched a persistent effort to portray Democratic presidential hopeful Joe Biden as a moderate in an effort to boost his appeal among moderates, or centrists, who make up the largest portion of the voting public. Time magazine described Mr. Biden as the “middle of the road” candidate on Saturday, while the… 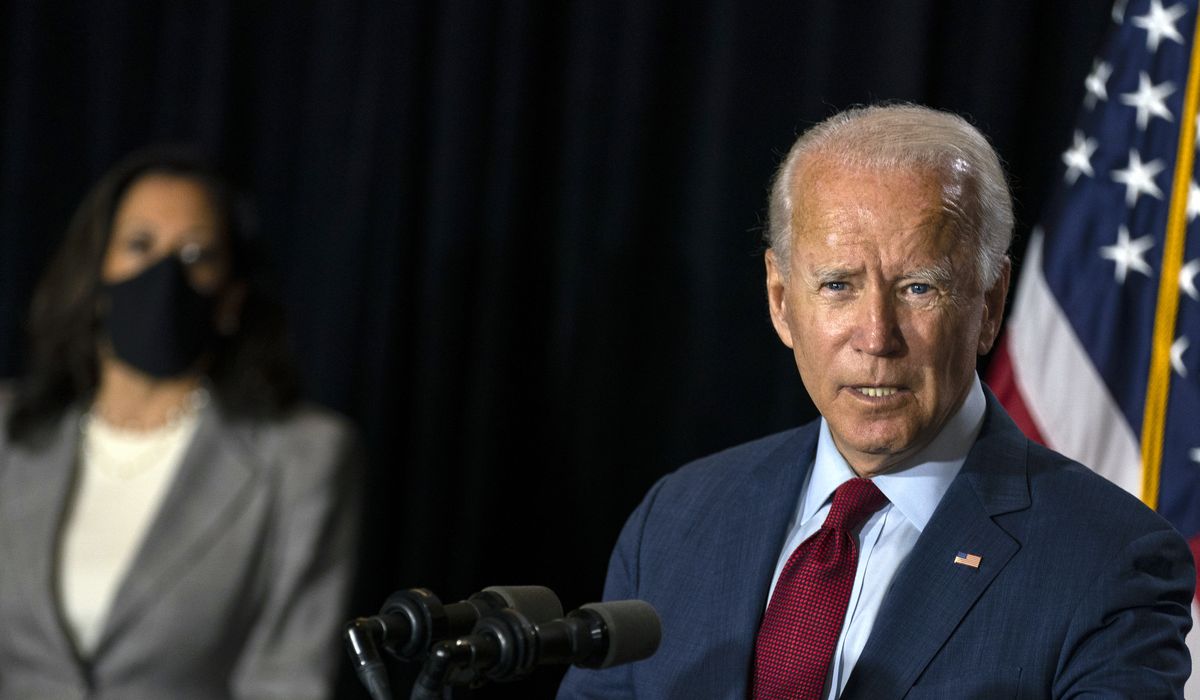 The news media has launched a persistent effort to portray Democratic presidential hopeful Joe Biden as a moderate in an effort to boost his appeal among moderates, or centrists, who make up the largest portion of the voting public.

Time magazine described Mr. Biden as the “middle of the road” candidate on Saturday, while the Los Angeles Times this week said the candidate had put a “centrist stamp on Democrats’ future.”

The Democratic convention will be a centrist hoedown,” predicted The Nation, referring to the four-day event which begins Monday.

Americans, however, don’t appear to be buying the media’s cozy moderate image, according to a new survey. Just a quarter believe Mr. Biden is a moderate, while a hefty portion say he is liberal. The bare minimum think there’s a possibility Mr. Biden could be conservative. Here are the numbers:

Top Dems reject any partial deals on coronavirus relief: ‘We cannot piecemeal this’

House Speaker Nancy Pelosi and Senate Minority Leader Charles E. Schumer said Thursday they would not accept any partial extensions or attempt to break coronavirus relief into smaller packages. “We cannot piecemeal this. It has an integrity. It has a oneness about meeting the needs of the American people, defeating the virus,” Mrs. Pelosi, California…

“We cannot piecemeal this. It has an integrity. It has a oneness about meeting the needs of the American people, defeating the virus,” Mrs. Pelosi, California Democrat, said.

The two top Democrats on Capitol Hill also slammed Republicans’ handling of negotiations so far, arguing the GOP is in disarray over the package.

“Now that Senate Republicans have finally woken up to the calamity in our country, they have been so divided, so disorganized, so unprepared that they have struggled to even draft a partisan proposal within their own conference,” Mr. Schumer, New York Democrat, said. “They can’t come together. Even after all this time, it appears the Republican legislative response to COVID is un-unified, un-serious, un-satisfactory.”

“They’re so divided and there’s no leadership from the president,” Mr. Schumer added.

Their comments come after the White House and Senate Republicans announced Wednesday night they had a deal on this next coronavirus package, but no proposal has been announced as of Thursday morning.

Several Republicans have broken rank over concerns about the high cost of the package — expected to exceed $1 trillion — how the party is going to address expiring boosted unemployment benefits, and funds to hard-hit state and local governments.

With the extra $600 a week unemployment benefits, as well as a few other COVID-19 provisions including eviction protection, are set to expire this month — putting pressure on lawmakers to meet those deadlines.

Republicans are concerned the supercharged unemployment benefits will incentivize some to stay out of work, but don’t want the aid to entirely lapse as lawmakers continue to negotiate on a larger package.

There were reports Wednesday that the GOP was debating a short-term extension on the $600 a week since many could agree on an exact number.

“I’d prefer we would find a solution for it,” Sen. Marco Rubio, Florida Republican, told reporters. “It would depend on how long that extension is for, if it is for two more weeks…that might be something I consider, but if it’s something longer than that I think we really need to focus on the solution — on the sort of fix that takes into account potential disadvantage to return to work and the fact that some have no work to return to.”

There’s been chatter amongst GOP senators about passing a temporary unemployment benefits extension as they work out the mechanics of a final deal.

Democrats, meanwhile, are committed to extending the full $600 a week payments, but Mrs. Pelosi also wants to see what Republicans have to offer on direct payments to the public.

“I’m all for the $600 because people really need it,” she said. “But again, as I said, we have issues that relate to direct payments for people and the size of what that is and the rest. But I go to the table with the commitment to the $600.”

Though a final GOP proposal hasn’t been released, their plan is expected to include $105 billion for schools and $16 billion for testing. Republicans are also working on another round of funding for small business loans in the Paycheck Protection Program, with potential new limitations on who can apply.

Mr. Schumer and Mrs. Pelosi, however, said they couldn’t comment on any specific numbers or begin negotiating until the Republicans have a plan on paper.

Palestinians reject reports of pulling UN resolution on US plan 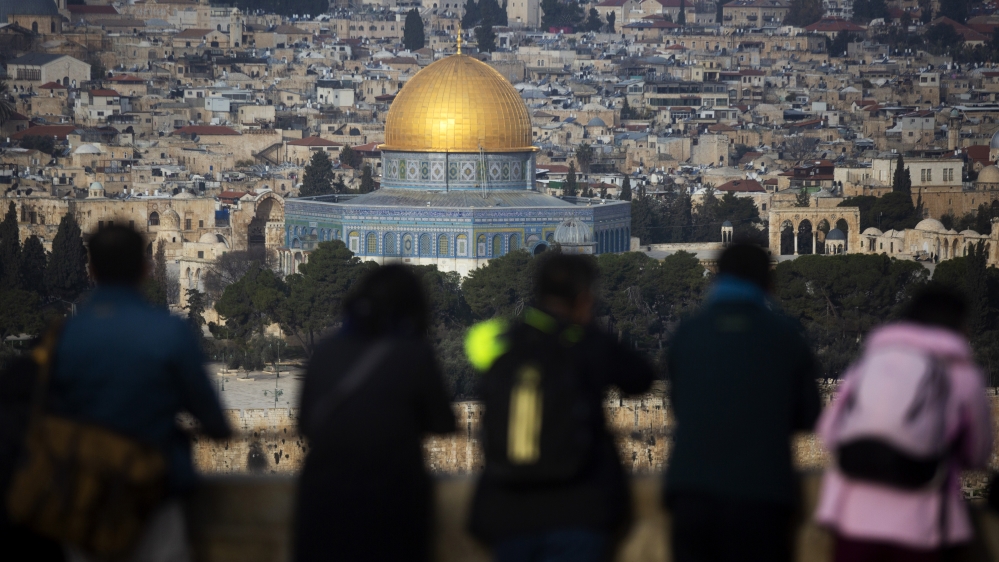 Palestinian officials have denied reports that a UN Security Council resolution condemning US President Donald Trump’s Middle East plan has been withdrawn, as Palestinian Authority (PA) President Mahmoud Abbas prepared to address the Security Council on Tuesday.
Saeb Erekat, secretary-general of the Executive Committee of the Palestine Liberation Organization (PLO), said a draft resolution was “still being circulated” and described rumours that the United States had exerted pressure on member states to obstruct the resolution as unfounded.
More:

After Trump’s plan, what options do Palestinian leaders have?

“We are continuing the process of consultation with various countries in a way that doesn’t contradict the principles of the resolution,” he said in a tweet.
“Reports that the resolution promoted by the Arab Group and the non-aligned movement has been withdrawn are unfounded.”

Reports that the resolution promoted by the Arab Group and the non-aligned movement has been withdrawn are unfounded. The draft resolution has been distributed.We are continuing the process of consultation with various countries in a way that doesn’t contradict the principles
— Dr. Saeb Erakat الدكتور صائب عريقات (@ErakatSaeb) February 10, 2020

Trump last month unveiled his long-delayed Middle East plan, which was strongly supported by Israel but condemned by the Palestinian leadership and people. The plan envisions a disjointed Palestinian state that turns over key parts of the occupied West Bank to Israel and favours Israel on key contentious issues including borders, the status of Jerusalem, and Jewish settlements.
Erekat, who has arrived in New York with Abbas, said reports about the Palestinian leadership pulling the draft resolution were part of a “vicious war” against Palestinians.
He also stressed that Abbas would address the Security Council as planned.
Divisions under the surface
The original draft resolution, co-sponsored by Tunisia and Indonesia and backed by the Palestinian delegation, said Trump’s plan violates international law and Security Council demands for a two-state solution based on the borders of Palestine before the 1967 war.
It would have expressed the council’s determination “to examine practical ways and means to secure the full implementation of its relevant resolutions, including enforcement measures under Chapter 7 of the (UN) Charter,” which cover military and non-military means.
After lengthy negotiations and revised drafts through the weekend, and the circulation of a drastically amended text by the US, the Palestinian delegation decided against putting any draft in “blue” – a final form for a vote, diplomats told The Associated Press news agency.
Erekat said since the resolution has not been put in “blue”, it cannot be said to have been pulled.
The Palestinian leadership has the backing of the Arab League, the Organisation of Islamic Cooperation (OIC) and, most recently, the African Union, which have all rejected the plan.
But individual countries’ positions are more complicated. In the midst of pushing for the UN resolution last week, Tunisia abruptly withdrew its UN ambassador, raising speculation that the Arab state had come under pressure from Washington.
After appearing on Thursday at the UN, Jared Kushner, Trump’s son-in-law and adviser who spearheaded his Middle East push, said there was a “tonne of cracks” in opposition to the plan.
He pointed to divisions within the European Union, which failed to issue a joint statement critical of the plan amid dissent from a handful of countries such as Hungary, led by the right-wing populist Viktor Orban.
Of the four EU members that hold seats on the Security Council, two of them – Germany and Estonia – looked ready to abstain from a vote criticising the US plan, diplomats told the AFP news agency.
The other two members are Belgium and France, which is a permanent member and therefore has the power to veto resolutions.
The United Kingdom, which is also a permanent member of the Security Council, left the EU at the end of last month.
Israel and the US have also been optimistic of winning at least muted backing from Arab states traditionally supportive of the Palestinians, with Gulf monarchies united with Israel in their hostility to Iran.
The ambassadors of Bahrain, Oman, and the United Arab Emirates (UAE) attended Trump’s unveiling of the plan alongside Israeli Prime Minister Benjamin Netanyahu, who later held a breakthrough meeting with Sudan’s top general.
Continue Reading…