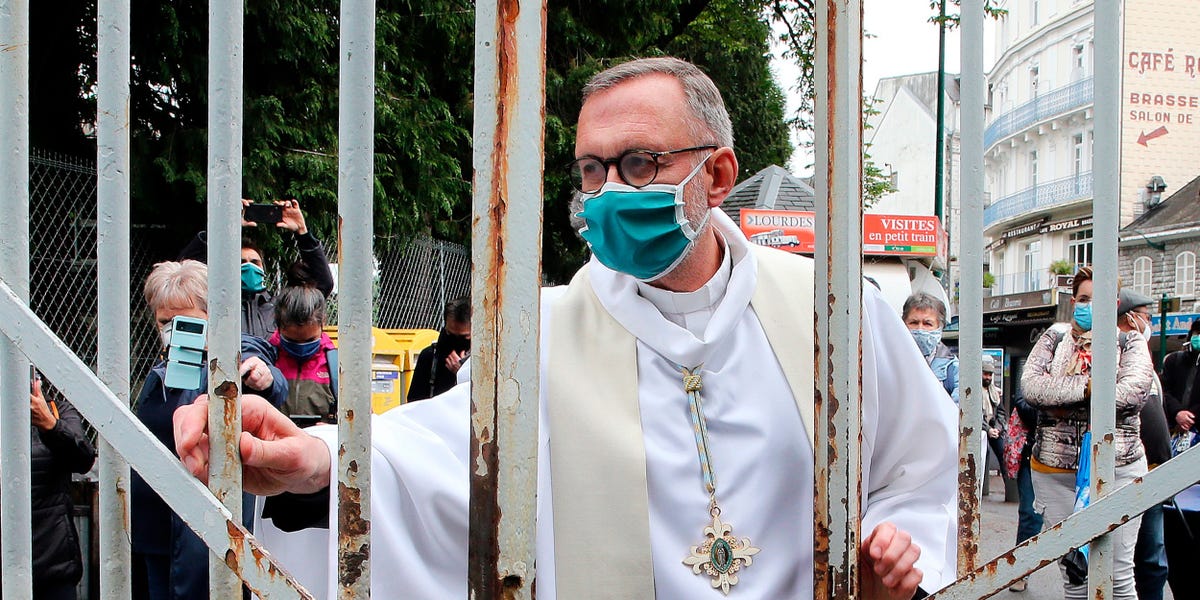 Diego Mesa was driving in Southern California on Thursday evening when he passed shops selling donuts, clothes, and cannabis.

It boggles his mind that these businesses were marked as essential and permitted to reopen on May 8, as Gov. Gavin Newsom’s reopening plan moved into its second stage. Churches, however, were shelved until the plan’s third phase — lumped in with personal care, exercise, and entertainment facilities.

“Our ideals differ in what we view as essential,” Mesa told Business Insider. “When we are deemed as non-essential, there’s an agenda there.”

But this isn’t about who’s right and who’s wrong, he added.

“Opening church is not the issue,” Mesa said. “It’s about whether I have the right to open the church. And, according to the First Amendment, I do.”

As the pastor of the Abundant Living Family Church in Rancho Cucamonga, Mesa is among more than 1,200 religious leaders in California who’ve signed a Declaration of Essentiality for Churches, vowing to host in-person services on May 31, Pentecost Sunday, with or without Newsom’s blessing.

Attorney Robert Tyler is representing the Cross Culture Christian Center in Lodi in a lawsuit against Newsom, alleging that the state’s public gathering ban violates religious freedom granted by the First Amendment.

He told Business Insider that next Sunday’s act of civil disobedience was sparked by religious leaders seeking recourse amid the pandemic.

“They began to say that this order by the governor has gone too far and too long,” he said. “The governor is deciding based upon his own subjective decisions as to what he thinks is essential and what is not essential. At some point in time, we have to be allowed to get over the fear and allow these essential ministries to meet again.”

As of Friday, the coronavirus has infected 1.58 million Americans and killed 95,276, according to Johns Hopkins University.

But, Tyler said, the disease and virus-related deaths are one part of this crisis. The other part encompasses unemployment, economic and financial hardships, isolation, depression, addictions, suicide, and other traumas.

“The pastors are seeing a huge need and have decided that they need to take a stand and do what God’s called them to do,” Tyler said. “And they will do so using all appropriate safety precautions recommended by the CDC and local governments, just as Costco and Walmart are required to do.”

In April, the Justice Department got involved in a federal lawsuit brought by a church in Greenville, Mississippi, over local officials’ efforts to stop drive-in services in a bid to reduce the spread of the coronavirus. “Religious institutions must not be singled out for special burdens,” Attorney General William Barr wrote then.

If authorities allow concert halls, cinemas, and restaurants to resume business, they can’t stop houses of worship from doing the same, he said.

“Even in times of emergency, when reasonable and temporary restrictions are placed on rights, the First Amendment and federal statutory law prohibit discrimination against religious institutions and religious believers,” Barr wrote. “Thus, government may not impose special restrictions on religious activity that do not also apply to similar nonreligious activity.”

“Simply put, there is no pandemic exception to the U.S. Constitution and its Bill of Rights,” Dreiband added.

In Europe, and elsewhere in the world, many places of worship have already been permitted to reopen with safety measures in place.

But Tyler’s legal efforts haven’t been successful so far. In a ruling on May 5, a federal judge in Sacramento denied a request from the Cross Culture Christian Center to reopen.

“Even in times of health, government officials must often strike the delicate balance between ensuring public safety and preserving the Constitution’s fundamental guarantees,” US District Judge John A. Mendez wrote in his ruling. “But during public health crises, new considerations come to bear, and government officials must ask whether even fundamental rights must give way to a deeper need to control the spread of infectious disease and protect the lives of society’s most vulnerable.”

Tyler is now moving the fight to the US Court of Appeals for the Ninth Circuit Court, where he’s hoping the judges will weigh in his favor.

“We’re asking the Ninth Circuit to rule that the governor’s order treats churches unlawfully by not allowing religious assemblies to meet on the same terms and conditions as secular organizations,” he said.

On Friday, President Donald Trump entered the cultural fray. He announced plans to designate houses of worship as essential services and told them they can open immediately — even though he doesn’t have the legal authority to override state rules.

“I call upon governors to allow our churches and places of worship to open right now … These are places that hold our society together and keep our people united, the people are demanding to go to church and synagogues, go to their mosque,” he said.

Several super-spreader events in the United States and South Korea have been traced back to places of worship, where large numbers gather indoors. In Texas, the Holy Ghost Catholic Church reopened its doors on May 2. But less than two weeks later, all services had been called off indefinitely after five members of the congregation tested positive for COVID-19 and a priest who died on May 13 may have had it as well. In Mississippi, the First Pentecostal Church was burned down on Wednesday after drawing criticism for violating stay-at-home orders by holding an in-person service on Easter.

Asked if he’s concerned by the possibility of parishioners contracting or spreading the virus during in-person services, Tyler said everything in life comes with some amount of risk.

“I think it is probably more likely for someone to die in a car accident than of COVID-19 in many parts of California,” he said. “The church isn’t saying we want to meet just because we think we have a constitutional right to do so — we want to meet because there are so many important needs of the community that need to be addressed.”

“Individuals need to be able to come together, to love and support one other again, while taking all the same precautions that any secular enterprise would,” he added.

Pastor Paul Chappell of Lancaster Baptist Church told Business Insider that it’s been over 10 weeks since he’s been able to minister in person to the church’s nearly 7,000 members.

During the pandemic, he’s used Zoom to livestream services, and the church’s staff has prepared meals for elderly community members and dropped off lunches at local hospitals. Other services, like youth meetings and marriage and crisis counseling have been paused.

Hundreds of pastors across the state have been “very compliant” with the stay-at-home orders, Chappell said, because the Bible encourages them to “obey and support authorities.” However, he said, it also contains “scriptural commands to assemble.”

Advertisement. Scroll to continue reading.
BackPage 1 of 2Next →
In this article:Pastors, reopen