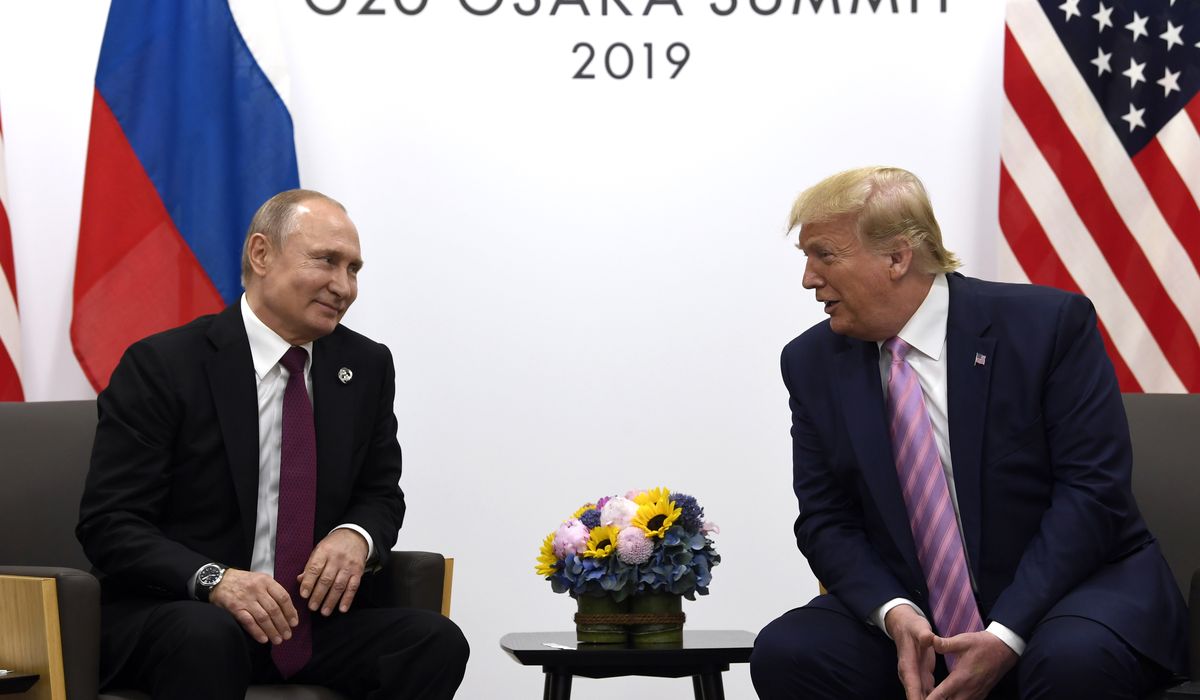 “These aren’t trivial arms control violations,” he said. “These are invasions of countries, assassination attempts and blowing up a 30-year-plus treaty through its violations.”

The State Department report, set for release as early as Monday, identifies violations and failures by the Russians to live up to arms accords in nine different agreements.

The violations over more than decade include the 1987 Intermediate-Range Nuclear Forces (INF) Treaty that banned medium-range, ground-based missiles. Russia secretly built and deployed the SSC-8 ground-based nuclear missile in violation of the INF Treaty, prompting the Trump administration to announce last year that it was pulling out of the accord.

Violations of the Vienna Document, part of the Organization for Security and Cooperation in Europe, include Russian stationing forces in Georgia’s Abkhazia and South Ossetia, the report says.

Moscow is violating the 1975 Helsinki Final Act by arming and training anti-government forces fighting in Eastern Ukraine, the report notes.

The Conventional Forces in Europe agreement is being violated by Russia’s stationing of military forces in Georgia, Moldova and Ukraine without those nations’ consent.

The Open Skies Treaty allowing military overflights was violated by Moscow by its blocking of flights near the Georgian regions of Abkhazia and Ossetia, the Russian enclave of Kaliningrad on the Baltic Sea, and observation of the large-scale TSENTR 2019 military exercise.

The report discloses how Russia covertly developed the SSC-8 cruise missile and had begun the development by the mid- to late 2000s.

“That means Russia was consciously breaking [the INF] for a decade or more,” the senior official said, noting that “multiple battalions” of the missile are deployed today.

On nuclear testing, the report identifies Russian experiments that have produced nuclear yields in contravention of Moscow’s claim to be observing a moratorium on nuclear testing.

“This year’s arms control report documents Russia’s abysmal track record in complying with its promises,” said the senior official, who is familiar with the report.

If Russia failed to notify the United States of its intent to conduct certain nuclear experiments that created a self-sustaining reaction, it could constitute a violation under the Threshold Test Ban Treaty, the official said.

On the 2010 Peaceful Nuclear Initiative (PNI), the report for the first time discloses that Russia is not adhering to all of its commitments on the peaceful application of nuclear technology.

“Russia no longer feels bound by its PNI pledge to eliminate and cease production of all nuclear warheads for the ground forces,” the report states.

Of Russia’s arms control treaty commitments, only the New START is being complied with, according to the report.

The senior official said the reason Russia has complied with New START is because the treaty does not constrain Moscow’s nuclear buildup. For example, tactical nuclear warheads and short-range nuclear missiles are not included in the treaty.

New START also does cover many of the strategic weapons being developed and thus there is little reason for Russia to violate the treaty, the official said.

The poor record of arms compliance is a key reason that any new treaties and agreements will include effective verification, such as on-site verification, and short-notice inspections.

“This is why restoring effective verification as a bedrock of arms control is a precondition for future agreements that must cover both Russia and China,” the senior official said.

Mr. Billingslea arrived in Vienna over the weekend with a delegation of about a dozen American security officials, including a senior officer from the Strategic Command, who will meet Monday with a group of Russian arms experts led by Deputy Foreign Minister Sergei Ryabkov.

The talks are scheduled to end Tuesday.

The question of China joining the arms talks is up in the air. Last week, Mr. Billingslea tweeted that there is growing pressure on China to join the talks.

“We’ll assess way ahead [on arms control] based on how constructive the Vienna talks are on unconstrained warheads, verification, and China’s crash nuclear program,” he said.

A Chinese Foreign Ministry spokesman told reporters in Beijing last week that Beijing will not join the Vienna arms talks.

“The Vienna meetings are an opportunity for Russia to explain why it so desperately wants [an] extension of New START,” Mr. Billingslea said. “And we stand to be persuaded.”

Mr. Ryabkov, the Russian deputy foreign minister, told The National Interest that Moscow sees “a downward spiral” in arms control that he blamed on the U.S. government.

“It looks like America doesn’t believe in arms control as a concept altogether,” Mr. Ryabkov said. “Instead, it tries to find pretexts to depart from as many arms control treaties, agreements, and arrangements that Russia is also a party to. This is very regrettable.”

However, Russia in recent years has been building several new strategic weapons, many of which are not covered by New START.

One of the most significant new arms compliance failures was Moscow’s use of a military nerve agent in a 2018 covert intelligence operation to assassinate a Russian defector living in Britain. The operation is outlined in the annual compliance report as well as a separate report on specific issues related to the 1997 Chemical Weapons Convention (CWC).

The report concludes that Moscow’s use of the nerve agent was a violation of commitments not to use chemical arms.

“The United States certifies that Russia is in noncompliance with the CWC for its use of a military-grade nerve agent in an assassination attempt on U.K. soil,” states the 20-page report known, as Condition 10 (C), that is required annually by Congress.

The violation is related to the attempted assassination of Russian defector Sergei Skripal and his daughter Yulia in Salisbury, England, in 2018.

Mr. Skripal, a former Russian military officer who worked as a double agent for Britain, was targeted by a Russian military intelligence hit team that used a military-grade nerve agent called novichok to try to kill him.

Mr. Skripal, his daughter and a police investigator who was stricken by the nerve agent survived. One person who came into contact with the poisoning device died after finding the device in a garbage bin.

Russia has denied any involvement in the Skripal poisoning.

However, in response to the operation by Russia’s GRU military intelligence service, President Trump, in coordination with U.S. allies, ordered the expulsion of 48 Russian intelligence officers from the United States in March 2018.

The report said scientists in the former Soviet Union developed the nerve agent used in the attack as a fourth-generation weapon called “novichoks.”

“It is highly likely these agents were developed to prevent detection by the West and circumvent international chemical weapons controls,” the report said.