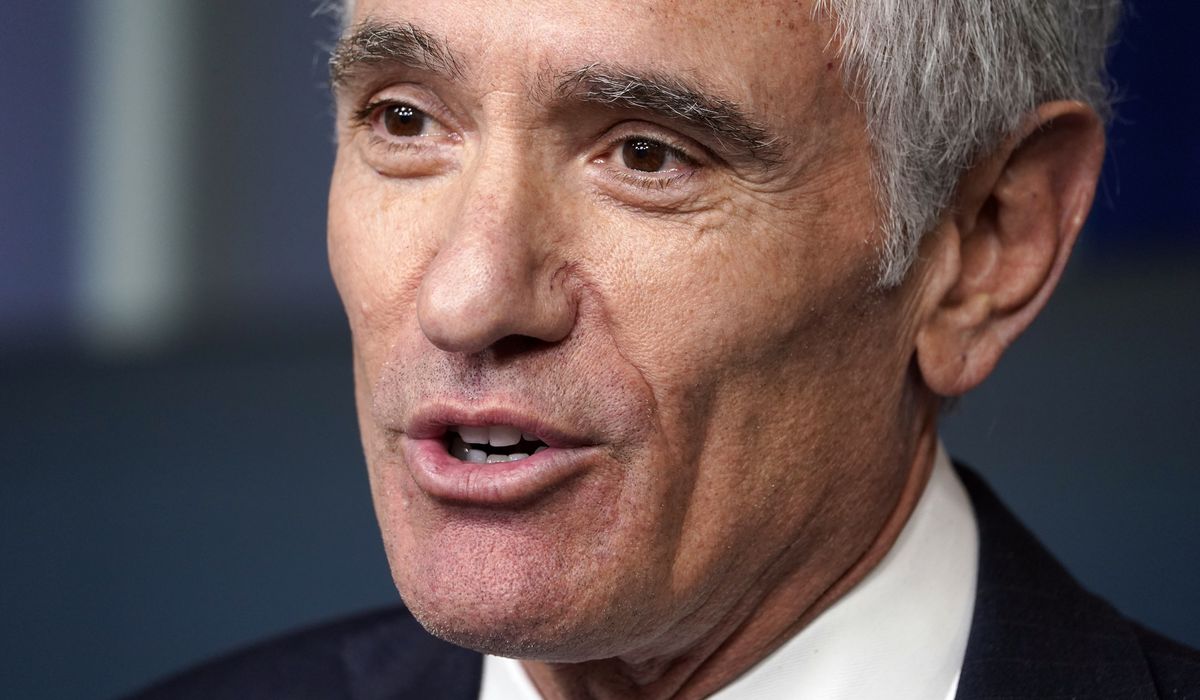 He says his views have been distorted in the media and too many people in the public eye have been “instilling fear” instead of addressing the damage caused by lockdowns on school children and workers who are less vulnerable to the disease.

“We know the harms are tremendous to closing schools and businesses. I don’t know why that is not front-and-center. That is the most important reason why I’m here,” he told The Washington Times.

He said the Trump administration has taken aggressive steps to shield nursing homes, a “tinder box” for COVID-19, and given Americans the protective equipment and know-how to make their own decisions about leaving their homes.

“We know who dies from this virus. It’s not equally impactful on different parts of society. Children have extremely low risk,” he said. “We also realize that small businesses have especially been hurt, including restaurants, travel, hotels and regular jobs where people do not have the luxury of working from home.”

His aggressive push to reopen the schools and businesses is resonating with Mr. Trump, who wants the country to fully reopen, but runs counter to much of the 24-hour news cycle and cautious approach endorsed by some governors and prominent federal officials. They are tallying up cases and leaving restrictions in place for bars and other businesses, fearing the infection will reach the vulnerable.

Dr. Atlas, a senior fellow at Stanford University’s Hoover Institution, said the focus on cases and “stopping COVID-19 at all costs” glosses over the societal fallout, from students who have been harmed by distance learning to low-income workers who don’t have the luxury of sipping coffee at home with their laptops.

Dr. Atlas joined the White House in a temporary capacity in the summer and has been a go-to man for the president, replacing the likes of Anthony Fauci and Deborah Birx as primary wingman in the briefing room. He speaks to Mr. Trump frequently and has an office at the White House.

Dr. Atlas said he may not be a virologist but his long background in medicine, health care policy and direct line of communication to top academics position him to translate the medical literature on COVID-19 into plain English and policy for the president — including ways to avoid the damaging consequences of lockdowns.

“That’s the challenge, and that challenge has not been given the appropriate consideration by the public health officials who somehow think they have unique expertise,” he said. “I cannot control what other people say, I am sitting here doing this for one reason: To help the president do the best job he can, to save lives and get Americans back on their feet.”

His prominent role has led to public disagreements.

An NBC News report said Robert Redfield, the director of the Centers for Disease Control and Prevention, could be overheard telling someone on the phone during a recent flight that Dr. Atlas is misleading the president on issues such as the importance of masks.

Dr. Atlas opposes mask mandates and said public officials are guilty of “erratic and inconsistent” advice on the use of face coverings. But he said he agrees with the president’s position that it is “common sense, reasonable policy” to wear a mask when you cannot socially distance, especially if you’re a high-risk person or around high-risk people.

Dr. Atlas also broke with Dr. Redfield over the share of Americans who likely remain susceptible to the virus. The director told senators that about 90% likely remain vulnerable, based on antibody tests, but Dr. Atlas said the CDC director used older data and didn’t take into account potential forms of immunity beyond antibodies.

Dr. Atlas says the development of “population immunity” among people who have contracged and cleared the virus may be slowing the virus’s spread in places that saw widespread transmission.

His push to reopen society and highlight naturally developed immunity is leading to a repeated charge: That he wants to let the virus rip to develop widespread “herd immunity” instead of trying to control the virus as drugmakers develop a vaccine.

The doctor rejects the claim.

“That is not the president’s strategy,” he said. “I have always advised [the] extreme protection of high-risk people. I have also understood the phenomenon, the virology, of population immunity.”

The criticism hasn’t disappeared, however. The doctor has been forced to reject “herd immunity” from the White House podium, and medical faculty at Stanford University, his main employer, raised the issue in an open letter that criticized him.

“I think it’s sad when university professors allow their own political beliefs to cloud their judgment,” Dr. Atlas said. “There is a false narrative that the president or me are not looking at the science. It’s the exact opposite.”

The White House, meanwhile, said the president “consults with many experts both inside and outside of the federal government, who sometimes disagree with one another.”

“All of the medical experts in the administration are working together around the clock to carry out the president’s number one priority: protecting the health and safety of the American people and defeating this virus from China,” White House deputy press secretary Sarah A. Matthews said.

The coronavirus was discovered in Wuhan, China, in December. It spread around the globe, upending normal life and devastating economies as countries pursued a variety of lockdown strategies to keep people apart and slow the transmission of the virus.

Dr. Atlas acknowledged the high death toll from COVID-19 but like Mr. Trump said the country is an inflection point, with treatments improving, the case-fatality rate plummeting and a vaccine around the corner.

“We’re improving here. There’s no minimizing the tragedy of 200,000-plus [deaths], but things are going better now,” he said.

Dr. Atlas said the nation must do three things in its battle with the coronavirus: Protect the vulnerable, prevent hospital overcrowding and open schools while ending restrictions that are “closing people out of their jobs.”

He said students who need eyeglasses or hearing aids often find out from being in the classroom, and school officials are often the ones who detect and report abuse in the home. The doctor also said K-12 teachers tend to be younger than 41, putting them at less risk, as New York City and other big districts wrestle with reopening their schools.

“We are the only country of our western peer nations that is so hysterical we are not opening schools,” Dr. Atlas said.

As Mr. Trump pushes to open the classroom and restart college football, the administration is dispatching 150 million rapid coronavirus tests it bought last month from Abbott Laboratories. About 100 million of the tests will go to governors, so teachers and critical workers can be screened, while 50 million will be dedicated to protecting the vulnerable at historically Black colleges and universities, assisted-living facilities and nursing homes.

The president is “doubling down on the protection of nursing homes,” said Dr. Atlas, who pointed to the concentration of elderly persons with underlying conditions in these settings.

“You have to really lock down on that,” he said. “It’s improper, it’s destructive to lock down the healthy people.”

Tim Scott: Vote by mail will ‘work out just fine’