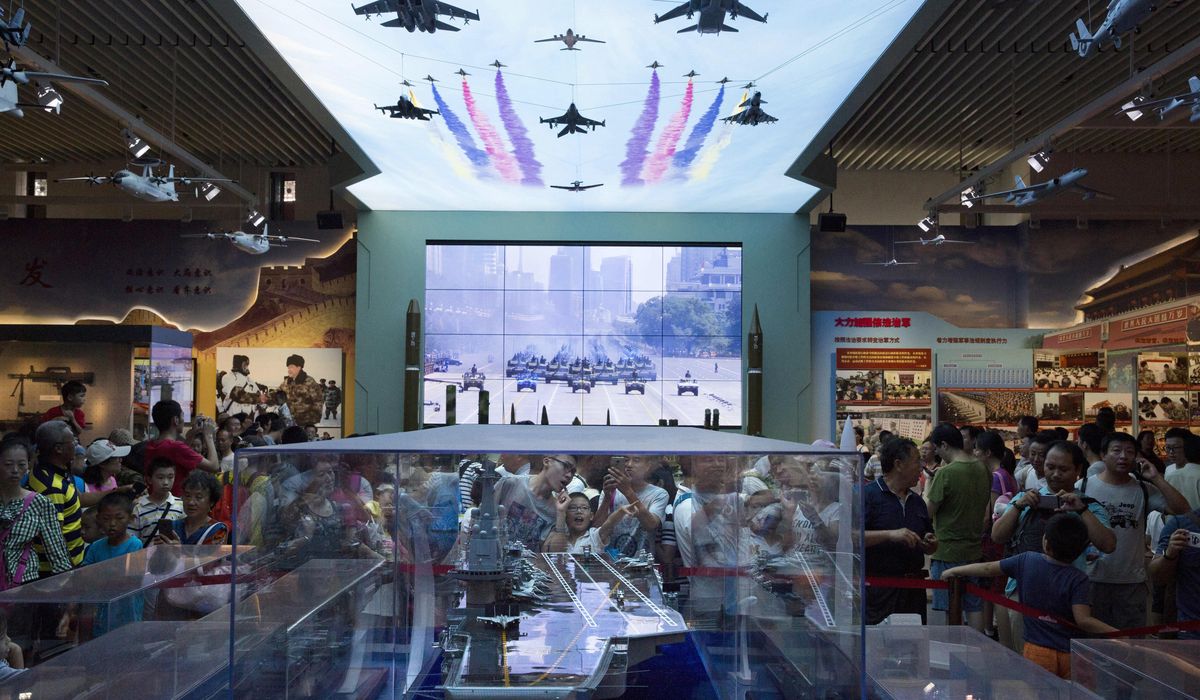 China’s buildup of military forces for over a decade, notably with missiles and other forces dubbed anti-access, area denial systems, has been a longstanding threat, he said.

“I’m especially concerned about Taiwan given the behavior of China in Hong Kong. The guardrails seem to be off the [Chinese Communist Party] at this point,” Mr. O’Brien said in an interview with The Washington Times.

China’s imposition of a draconian national security law in Hong Kong has undermined the former British colony’s democratic system that since 1984 had been guaranteed to remain independent of communist rule for 50 years.

“The swift termination of the democratic experiment that was Hong Kong without any sense of shame was something that took the world and some of us by surprise,” Mr. O’Brien said aboard an Air Force C-40 aircraft after a speech last week in Iowa.

The takeover was swift and efficient and effectively shut down Hong Kong’s democratic system, he said.

“So, the next place they would look and the place they talk about incessantly is Taiwan,” Mr. O’Brien said.

China recently conducted aggressive military activities toward Taiwan, an island located 100 miles off the southern Chinese coast that was formed by Nationalist Chinese forces that fled the mainland in 1949.

Large-scale war games near Taiwan earlier this month were accompanied by bellicose rhetoric from state-run China media that noted China could use similar maneuvers as a prelude for an invasion.

Additionally, significant numbers of Chinese warplanes, both fighter jets and bombers, in recent days have been conducting provocative incursions across the unofficial dividing line in the Taiwan Strait separating Taiwan from the mainland.

Chinese Defense Ministry spokesman Senior Col. Tan Kefei told reporters in Beijing on Thursday that China will do “whatever it takes” to prevent Taiwan from declaring formal independence.

“If Taiwan separatist forces dare to attempt Taiwan’s secession under any circumstances, we will do whatever it takes to thwart their efforts,” he said.

China’s ruling Communist Party wants Taiwan to rejoin the mainland under its “one country, two systems” formulation that would allow Taipei to keep its democratic system.

But China’s credibility regarding the pledge was undermined after the crackdown on Hong Kong, the first — and failed — test case for the one country, two systems formula.

Chinese threats against Taiwan increased after the recent visit to Taiwan by Undersecretary of State for Economic Growth, Energy and the Environment Keith Krach, who visited the island for the funeral of Taiwanese President Lee Teng-hui.

Mr. O’Brien said recent threats against Taiwan are a sign that Taipei needs to increase its defense capabilities.

“The Taiwanese need to get very serious about spending money on defense,” he said, noting Taiwan’s annual defense spending has been about 1.2% of GDP for many years.

“Taiwan needs to demonstrate resolve and will, and I think that Taiwan is starting to move in that direction,” Mr. O’Brien said.

Mr. O’Brien urged Taipei to adopt the Reagan-era policy of “peace through strength” which has also been a policy of President Trump.

“Look, peace through strength works,” he said. “We want to see peace across the Taiwan Strait and we want to see the mainland and Taiwan getting along and have great relations.”

Mr. O’Brien said China’s recent aggressiveness are being watched around the world.

“The bullying and the threats against Taiwan are opening the eyes of not just of people in America but I’m hearing from people all over the world, other world leaders and other national security advisers who have been somewhat taken aback by the aggressiveness of China with respect to Taiwan,” he said.

Asked if the United States would defend Taiwan from a mainland attack, Mr. O’Brien said: “China knows our position on that and it’s been consistent and clear across Republican and Democratic administration’s since the Taiwan defense act, since we switched our recognition from Taipei to Beijing. They understand our position and there have been no change in this administration. That’s been conveyed to them very clearly.”

The 1979 Taiwan Relations Act does not explicitly obligate a U.S. defense of Taiwan.

The U.S.-Taiwan defense treaty was jettisoned as part of the deal that gave Beijing full U.S. diplomatic recognition.

However, the act states that the United States will “maintain the capacity of the United States to resist any resort to force or other forms of coercion that would jeopardize the security, or the social or economic system, of the people on Taiwan.”

On the subject of the China’s mishandling of the deadly coronavirus pandemic, Mr. O’Brien said the president has said China should be held accountable for the disease and the economic consequences.

“And it should not just be the United States holding China accountable,” he said. “China has caused almost a million deaths worldwide. China’s caused trillions in economic damage around the world.”

Mr. O’Brien said China has been the origin of several viruses and needs to better control such outbreaks.

Second, China has to “do something to make things right for the rest of the world,” Mr. O’Brien said.

“Whether that is debt relief for every country they’ve infected or caused damage to, or some other program, China ought to be the country itself taking responsibility for what it did to the world. It shouldn’t be up to others to hold them accountable. It should up to China itself coming forward to do the right thing.”

On a potential international incident that could impact the U.S. presidential election, Mr. O’Brien said “We’re alert every day for any type of event.”

An unpredictable event such as an attack, terrorist attack or some type of military provocation, could be carried out to try and influence the Nov. 3 election.

Numerous “bad actors” are operating around the world including China, Russia, Iran, Venezuela along with Islamic terrorist groups.

“So we’re on alert 24/7,” Mr. O’Brien said. “There are a lot of bad actors that don’t want to see the president reelected. They don’t like peace through strength, they don’t like America holding them to account.”

“So if there were some country that thought they could create an incident or spark an event that would reflect negatively on the president, it wouldn’t surprise me. Our eyes are open and we’re going to monitor things carefully.”

There are no specific indications of potential terrorist attack planning related to the election but Mr. O’Brien said there are “many, many terrorist organizations” operating today.

“We’ve done a pretty good job curbing them and taking leaders off the battlefield. We’ll continue to do that,” he said.

“But I’m sure there are terrorist plotting every day to kill Americans,” he noted. “The problem they’ve got is that we’ve got folks in JSOC and the CIA and other organizations that are working every day harder than they are to disrupt their plots.”

JSOC is the acronym for the Joint Special Operations Command, the North Carolina-based military unit that has been leading overt and covert counterterrorism operations.