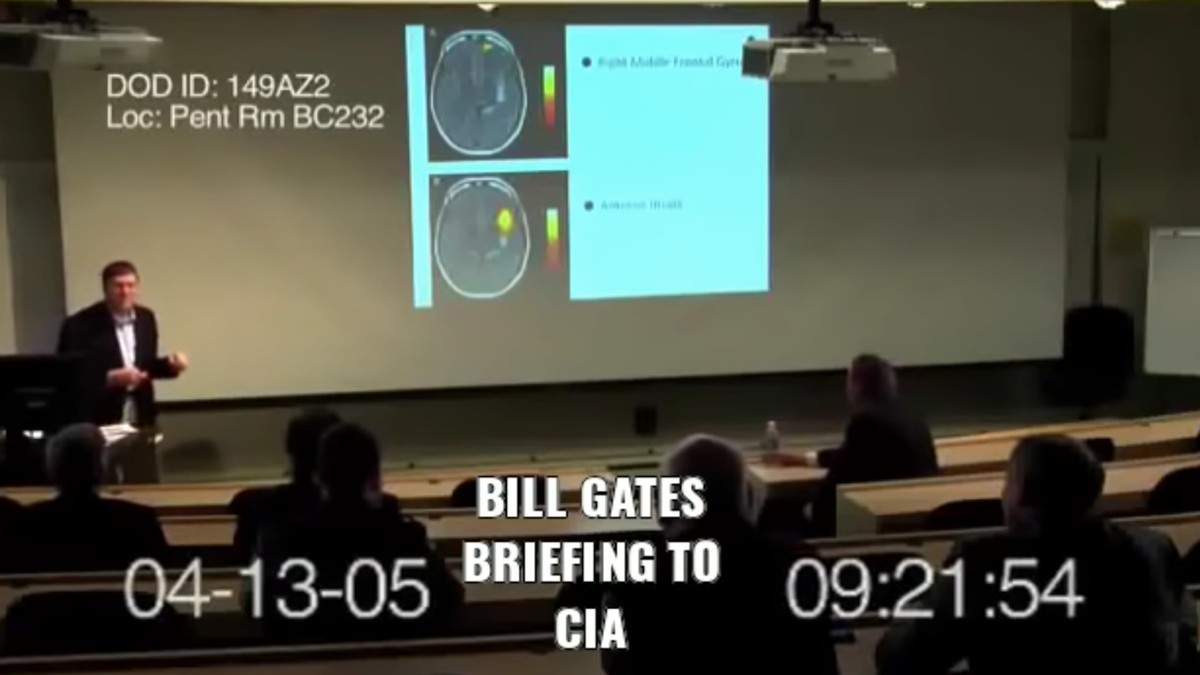 A bonkers hoax video about Bill Gates has been making the rounds on social media — and it’s setting the anti-vaxx conspiracy world on fire.

The video claims to show Gates briefing the CIA in 2005 about a vaccine to immunize religious fanatics. The video, which is obviously faked, is getting gobbled up by online conspiracy theorists who’ve latched onto the Microsoft co-founder as the mastermind behind the coronavirus pandemic.

The video started circulating about a week ago and is now gaining steam on YouTube, Facebook and Twitter — despite those companies’ repeated pledges to contain the spread of disinformation. One version of the video had amassed close to 37,000 views in just a few days.

The pixelated video shows a man who looks vaguely like Gates (but sounds nothing like him) giving a presentation to an audience of about six people. The presentation consists of a series of graphs and diagrams purporting to show how the expression of “VMAT2” (also known as the “god gene”) was more prevalent in religious fanatics. The notion of a “god gene,” that genetics determine human spirituality, was an idea that was proposed in a book by geneticist Dean Hamer in 2004.

“So what you’re getting at is by studying this virus, we’re going to eliminate individuals from throwing on a bomb vest, going into a market and blowing up the market?” asked someone in the audience. “Our hypothesis is that these are fanatical people, they have overexpression of the VMAT2 gene, and by vaccinating them against it, will eliminate this behavior,” the speaker replied.

While the attribution to Gates appears to be new, the video itself isn’t. Like most online hoaxes, it’s enjoyed a relatively long, muddled existence on the internet.

Conspiracy debunker Snopes wrote about an earlier version of the video in 2015. They traced it back to a blog on a fringe conspiracy website called wanttoknow.info from 2007 that claimed to expose a secret Pentagon project dubbed “FunVax.” “The Pentagon may vaccinate large populations in the Middle East with what’s being called FunVax – a fundamentalist vaccine,” the article claimed.

The article linked out to the video (embedded on another fringe site) and to a “government document” about the program.

But as Snopes points out, the person blogging about “FunVax” even acknowledged that there was “some possibility that the above video and document are faked.”

The video started to get more attention six years later, when it was picked up by a popular anti-vaxx site called Natural News. That article claimed that this new “FunVax” would be dispensed through car exhaust fumes, large-scale spraying, food, and water. “Behaviour modification through vaccination,” the article stated. “Say goodbye to your free will.”

Reverse-image searches of stills from the video show that it was shared on other fringe sites, often under tags such as “chemtrails,” “eugenics,” or “Pentagon bioweapon to destroy religion.” Snopes pointed out that the claims in the video have never been verified.

Andrew Beers, a Ph.D. student at the Center for an Informed Public at the University of Washington, located online discussions about the video in 2012 — neither of which made any reference to Gates.

But it’s not surprising that this video is now having a renaissance with a new Gates-centric plot line. Gates has long been villainized by anti-vaxx types for his foundation’s work researching vaccinations. But in the last few months, online conspiracists cobbled together a narrative that essentially accused him of releasing the virus as a ploy to launch a mass vaccination campaign.

An even more bonkers telling of that narrative suggests that the combination of Gates’ vaccine, high-frequency waves from 5G cell-phone towers and dust sprinkled from chemtrails would transform human beings into robots, who would be controlled by a cabal of deep-state global elites.

These conspiracies have made their way off the internet and into the real world: inspiring chants of “arrest Bill Gates” at anti-lockdown protests in the U.S., and arson attacks on 5G towers in the U.K., Italy, Ireland, Belgium, and Cyprus.

What’s more, the level of disinformation has been so high in recent months that the World Health Organization has declared an “Infodemic.” While YouTube, Facebook, and Twitter have vowed to tackle coronavirus-related disinformation (often by placing warnings on content that they believe could be misleading), those platforms have enabled the spread of other viral hoax videos containing unsubstantiated claims about coronavirus.

While the Gates video isn’t specifically about coronavirus, it’s being shared to bolster unscientific claims about the origin of the virus.