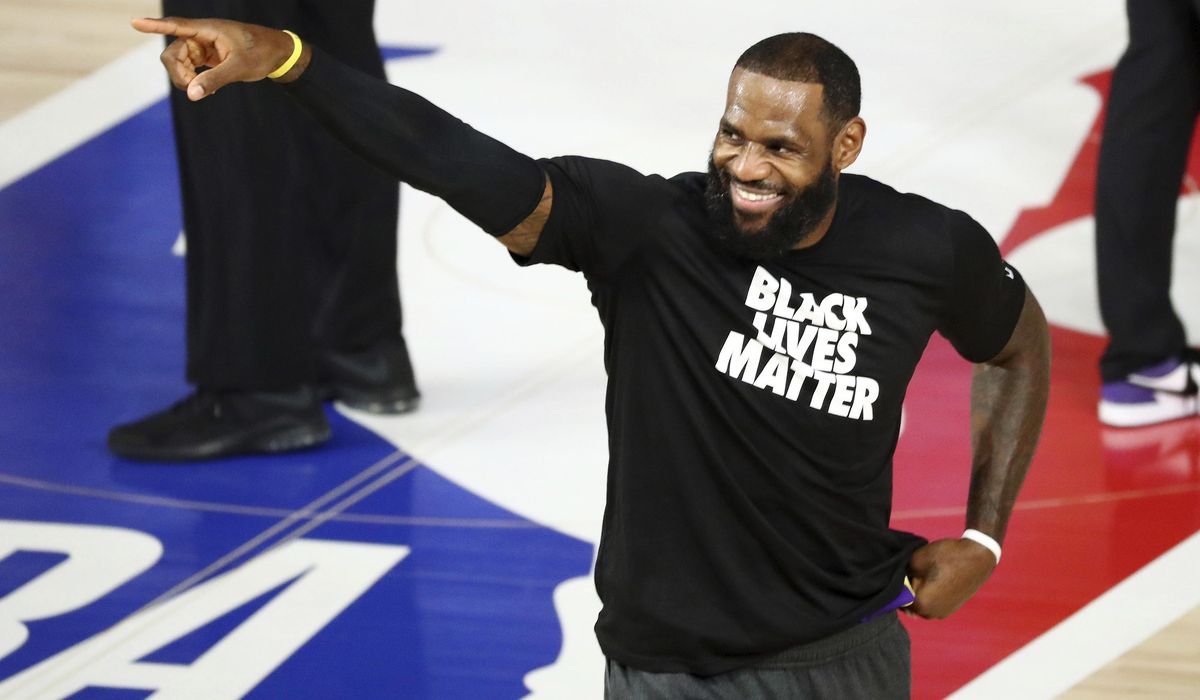 Baseball and hockey viewership is up. The PGA’s TV numbers are strong and NASCAR’s races were the third-and-fourth most-watched sporting events on the air last weekend. But, as President Trump pointedly noted this week, the NBA is in a ratings slump.

As sports leagues stagger back to life after the global COVID-19 shutdown, athletes have made it clear to owners and fans that protests and calls for social justice — from kneeling during the national anthem to speaking out on partisan political issues — will be part of the new norm.

And no league has embraced activism more than the NBA, a league where players now sport social justice messages on the backs of their jerseys, the Black Lives Matter logo appears at centercourt and stars like LeBron James and Chris Paul actively call out for racial justice.

That volatile mix of politics and sports is turning viewers off, Mr. Trump said Tuesday.

“People are angry about it … they don’t want — they have enough politics with guys like me, they don’t need more,” the president said. “The NBA is in trouble. I think it’s in big trouble, bigger trouble than they understand.”

According to Sports Media Watch, a website that tracks sports television ratings, the NBA saw its national ratings decline 4% from its pre-pandemic average through the league’s first week of returning to action.

While the NBA has struggled to rediscover its ratings mojo in a post-pandemic television landscape, NHL fans seem more than happy to follow the sport into the uncharted territory of playoff hockey in August. NBC Sports touted that its hockey ratings were up 39% for the NHL’s qualification round compared to its regular-season average.

Baseball, too, has seen a surge with ESPN reporting Thursday that the network’s MLB viewership jumped 29% to an average 1.2 million viewers. A company spokesman said viewership is up across key demographics, including adults 18-49 (57%) and 18-34 (69%). And the league’s premiere opening night matchup — the World Series champion Washington Nationals against the New York Yankees, carried on ESPN — was the most-watched regular season baseball game since 2011 with 4 million viewers.

Both the NHL and MLB have also weighed in with support for the nationwide outcry over the death of George Floyd, a Black man who died while being arrested in Minneapolis in the spring.

The letters “BLM” were stenciled near the mound at Nationals Park on opening night as players and coaches, wearing “Black Lives Matter” shirts, knelt in unison before the national anthem. NHL players have formed a coalition to fight racism.

Even NASCAR took a stand, telling its fans that symbols and imagery of the Confederacy, long a staple at Southern races, would no longer be tolerated inside racing arenas.

Unlike the NBA, baseball and hockey seem to be benefitting, for now, from pent-up demand from sports-starved fans — a phenomenon the investment firm Needham and Company foretold earlier this year. The firm’s 50-page report predicted “record” ratings for live sports upon their return, citing the success of “The Match,” a charity golf outing in May between Tiger Woods and Phil Mickelson that averaged an eye-popping 5.8 million viewers, and a survey in which 65% of respondents self-identified as sports or casual sports fans.

“What we’ve seen so far is that the first events do well,” Lewis said. “And everything then goes right back to normal.”

The NBA, like MLB, benefited from a strong opening night, though has since seen a decline.

The league drew 3.4 million viewers for an opening night matchup between  James and the Lakers against Kawhi Leonard and the Clippers. But a week later, in the same time slot, only 1.5 million tuned into the Lakers’ loss against the Houston Rockets (a game that, admittedly, was missing James and Russell Westbrook.)

Overall, the NBA still draws a higher average than baseball or hockey, with 1.56 million viewers across TNT, ESPN and ABC, according to Sports Media Watch.

Crakes noted the number of options viewers now have, stretching across new time slots and months not usually associated with sports like basketball and hockey. A playoff hockey game, for example, started as early as 11 a.m. this week, while the Wizards’ season finale Thursday against the Boston Celtics began at noon.

“The total number of minutes can be up because people are flipping (channels) around, so they might shave a minute or two off their duration of one thing and go over to something else,” Crakes said. “That doesn’t mean the sports echo system is failing or anything like that. … Everybody has come back at their own levels, even though they have competition they’ve never faced before.”

Crakes and Lewis, however, expressed skepticism that any decrease in the NBA’s viewership could be explicitly tied to the league’s increasingly visible and prominent social justice efforts.

Lewis pointed out the NBA’s ratings have mostly declined since James left the Miami Heat in 2014, noting only two seasons were up overall.

“I don’t think people need a political motive to not tune into a Magic-Sixers game on a Friday at 3 p.m.,” Lewis said.

Ultimately, sports are still a valued commodity. Networks, according to the Needham and Company report, paid $15.7 billion in 2019 for annual sports rights fees. And since they’re mostly watched live, it’s an effective way for advertisers to reach consumers.

Lewis said none of the sports leagues are going to go out of business because of ratings from this summer. But he added there are a lot of unknowns, such as what the NBA’s ad revenue for the 2021 Finals might look like if rates are based on a year when the league has to compete with the upcoming NFL season.

“It’s impossible to draw any real conclusions about what we’re seeing right now,” Lewis said. “The only thing I can firmly say is that we can debunk the idea that absence makes the heart grow fonder in a historic way.”