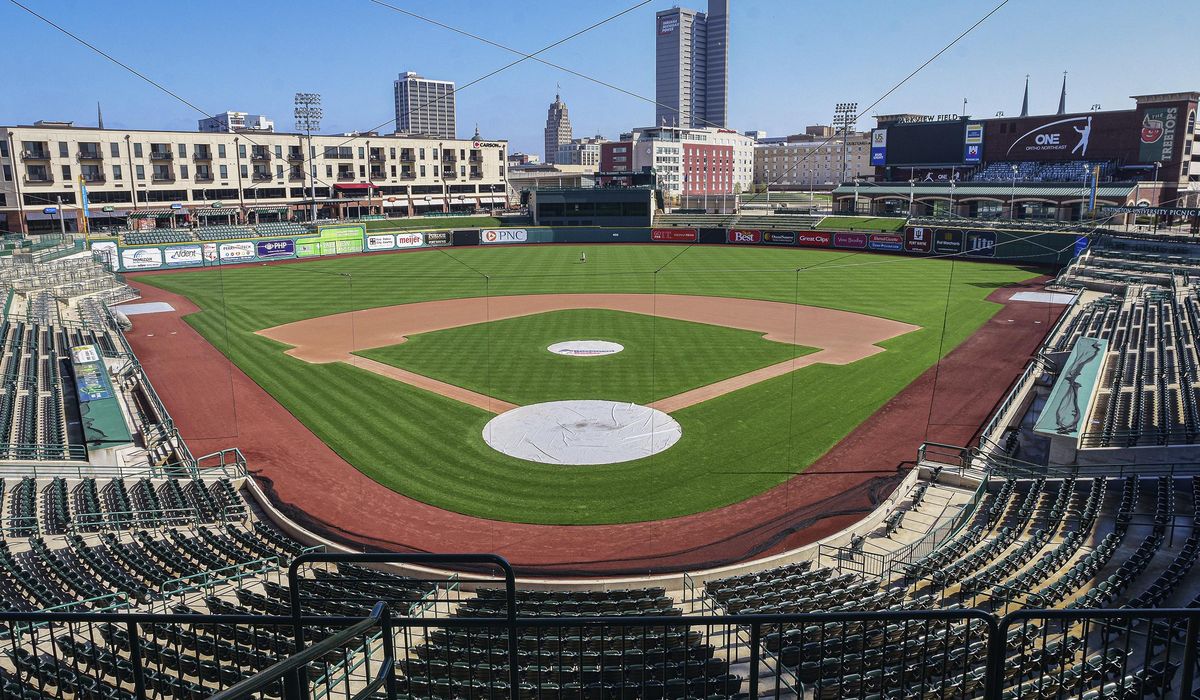 In this April 8, 2020, file photo, an empty Parkview Field minor league baseball stadium is shown in downtown Fort Wayne, Ind. Unlike the NFL, NBA or Major League Baseball that can run on television revenue, it’s impossible for some … more>

Most sports leagues in North America were suspended March 11 or 12 due to the coronavirus pandemic, and many major events here and around the world were canceled altogether. Now, several months later, they’re starting to come back to life and make concrete plans to resume their games.

NASCAR and the PGA Tour were the earliest to come back, albeit without fans, while several more are in the works. The most popular “hub” location so far is Central Florida, where the NBA, Major League Soccer and the WNBA could all overlap in parts of July and early August. (Read Matthew Paras’ explainer about the “hub city” concept here.)

Follow this tracker for updates on where each of the major professional sports leagues, as well as college sports, stand in their return.

Cup series returned May 17 at Darlington Raceway in South Carolina; races held twice a week most weeks to catch up on season
Up next: GEICO 500 at Talladega Superspeedway in Alabama on June 21; two races at Pocono Raceway in Pennsylvania June 27-28
NASCAR has begun to allow small numbers of fans into events, where they must socially distance at all times; the league wants 30,000 fans to attend its All-Star Race July 15 in Bristol, Tennessee
PGA Tour:

Tour resumed June 11-14 with Charles Schwab Challenge in Fort Worth, Texas
Up next: RBC Heritage in Hilton Head, South Carolina, June 18-21; Travelers Championship in Cromwell, Connecticut, June 25-28
No fans will be allowed onto the courses for at least the first four tournaments
Coming soon

Season will resume in late July or early August (following a training camp period beginning July 10)
League will have 24 teams compete in the Stanley Cup Playoffs, with seeds No. 5 through No. 12 in each conference playing a best-of-five elimination series to qualify for the usual 16-team field
The top four teams in each conference, including the Washington Capitals, will play a round robin to determine their seeding; teams will be re-seeded after each round
Location: Two as-yet-unannounced hub cities, without fans
NBA:

Season will resume in late July, with the NBA Finals finishing no later than Oct. 12
League will have 22 teams, including the Washington Wizards, play eight more regular-season games to determine the playoff field and seeding before holding a standard NBA playoffs
Location: ESPN Wide World of Sports Complex at Walt Disney World, near Orlando, Florida, without fans
WNBA:

Season will begin in late July, last 22 games and end with a WNBA Finals in early October
Location: IMG Academy in Bradenton, Florida, without fans
MLS:

Season will resume with the “MLS is Back Tournament,” July 8-Aug. 11
Location: ESPN Wide World of Sports Complex at Walt Disney World, near Orlando, Florida, without fans
Season will continue after the tournament, but no details have been revealed
NWSL:

Season will begin with the “NWSL Challenge Cup,” June 27-July 26
Location: Soccer stadiums in Herriman and Sandy, Utah, without fans
Season will continue after the tournament, but no details have been revealed
Triple Crown horse racing:

Baseball owners and players have yet to come to a financial agreement for how salaries should be paid for a shortened 2020 season without fans and, therefore, without gate receipts
Under the two sides’ initial agreement in March, Commissioner Rob Manfred has the ability to enforce a specific season length if no agreement can be reached; this is rumored to be in the range of 50-55 games before the playoffs
Manfred said June 15 that he was not confident there would be a season, just five days after saying he was “100%” confident
Tennis:

Has not lost games due to the pandemic arriving in North America weeks after Super Bowl LIV was completed
Teams have begun opening training facilities to coaches
Washington Redskins training camp still scheduled for July 26, but they must hold it at headquarters in Ashburn, Virginia, rather than travel to Richmond
NFL held “virtual” draft, released schedule with plan for Sept. 10 kickoff
College football:

NCAA Division I football and basketball teams were allowed to resume voluntary workouts June 1
Season scheduled to begin Aug. 29
Notre Dame and Navy canceled plans to play in Dublin, Ireland, and will instead meet at Navy’s stadium in Annapolis, Maryland, on either Saturday or Sunday of Labor Day weekend
Golf majors:

LOVERRO: ESPN strikes out with revisionist take on McGwire, Sosa

John Carlson had a historic scoring year, but he’s far from a Norris Trophy lock

Scherzer, Harper among baseball stars posting message for MLB: ‘Tell us when and where’

John Carlson had a historic scoring year, but he’s far from a Norris Trophy lock

NHL players stand up with unified voice against racism

NBA lays out its vision for Disney restart to teams, players

Cuomo gives go-ahead for U.S. Open in New York in August without fans

Scherzer, Harper among baseball stars posting message for MLB: ‘Tell us when and where’

Coming off career lows, Kerrigan eyeing bounce-back season: ‘I know what I can do’

When will sports return? Tracking timetables, plans and latest news