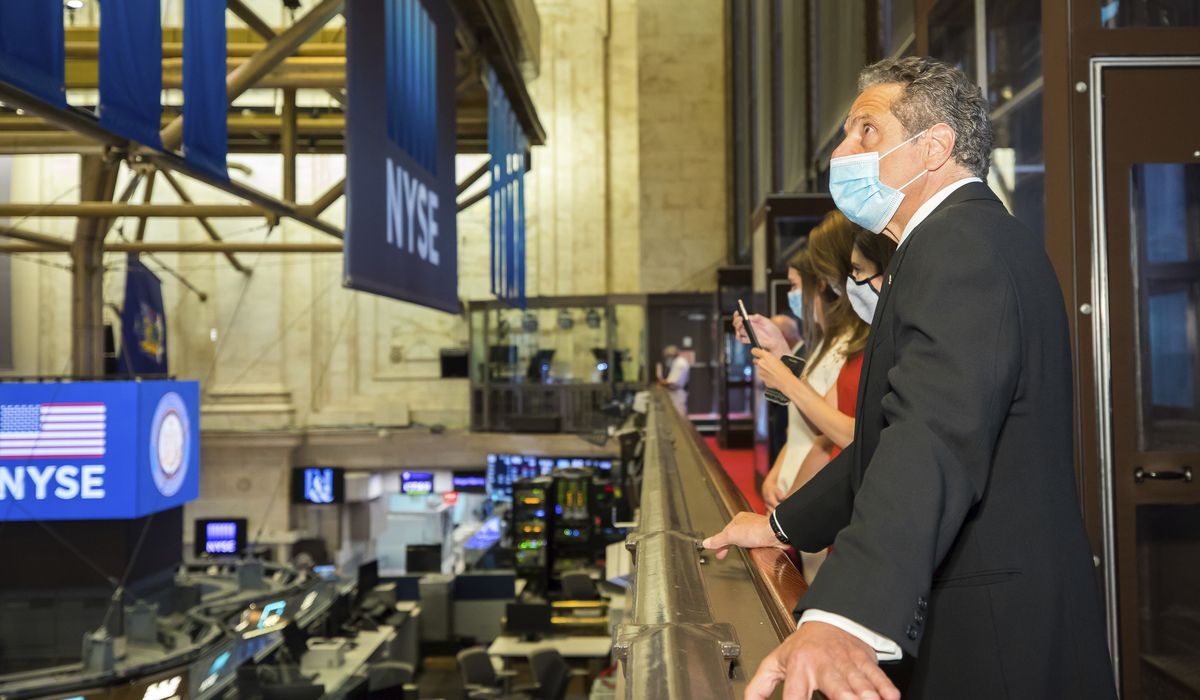 Despite shutdown orders keeping much of New York City dormant, Gov. Andrew Cuomo helped ring the opening bell at the New York Stock Exchange, which opened to in-person trading for the first time since March.

The action on the trading floor served as a harbinger of economic activity inching back to life in the U.S.

Consumer confidence ticked up in May with all 50 states starting phased re-openings, the Conference Board reported Tuesday.

Air travel got a boost over the holiday weekend, with more than 300,000 passengers passing through airport checkpoints on both Thursday and Friday. While those numbers were far lower than the typical 2 million daily travelers for Memorial Day, the uptick from the last two months was the first bright sign for the hard-hit airline industry in weeks.

“People are probably looking down the road, they realize this is temporary and they believe they are going to go back to work and businesses will reopen. I think that’s a big plus,” he said.

In the hardest-hit state of New York, all regions except the New York City area are expected to be up and running, at least partially, by the end of the week.

Virginia Gov. Ralph Northam said he would begin reopening Friday the parts of the state, such as Northern Virginia and Richmond, that have remained closed. And D.C. Mayor Muriel Bowser said the nation’s capital is set to enter phase one of reopening on Friday.

Mr. Cuomo is set to travel to Washington on Wednesday to talk infrastructure with Mr. Trump.

“You need to start the economy, you need to create jobs, and you need to renew and repair this county’s economy and infrastructure. Now is the time to do it,” Mr. Cuomo said.

Some Democrats had mused about subbing in Mr. Cuomo for former Vice President Joseph R. Biden to be the Democrats’ 2020 presidential nominee when the governor’s daily press briefings on COVID-19 became must-watch national news early in the pandemic.

More than 4,500 recovering coronavirus patients were sent to nursing homes under a since-modified state directive, according to an Associated Press tally.

The policy was intended to free up bed space in hospitals for a COVID-19 case surge, but it risked spreading the infection to the most vulnerable population, with people 70 and older accounting for more than 65% of coronavirus deaths, according to the New York Health Department.

“What New York did was to follow what the Republican administration said to do. Don’t criticize the state for following the president’s policies,” Mr. Cuomo said over the weekend.

On Wall Street, the Dow Jones Industrial Average climbed about 530 points, or 2.2%, to 24,995 on Tuesday, buoyed by optimism about the economy and reports of progress by companies racing to develop a vaccine.

While still relatively low, the U.S. consumer confidence index ticked up to 86.6 in May from 85.7 in April.

Lynn Franco, senior director of economic indicators at the Conference Board, said a recent “free-fall” in consumer confidence stopped in May after two months of “rapid decline.”

“We’re certainly closer to a slowing of the decrease,” said Brian Kench, dean of the University of New Haven’s Pompea College of Business. “The optimism I see is that the negative is slowing. And so I think that’s what you’re picking up with bookings and general optimism.”

The Mortgage Bankers Association recently reported that applications for home purchases increased for five straight weeks after plummeting in April.

That’s down 86% from a year ago, but it’s almost four times the 87,534 travelers the agency reported on April 14, which was the single-day low since the virus took hold.

“There’s more traveling going on, more gas demand, very, very strong housing demand,” Mr. Kudlow said. “Some of the housing surveys were ahead of pre-pandemic. And businesses are opening.”

To be sure, millions of Americans are still feeling the economic pain from the lockdowns.

The Labor Department reported last week that another 2.4 million people filed for unemployment, bringing the total number of claims to 38.6 million since the virus took hold March.

Experts have suggested that the U.S. unemployment rate could top 20% in May after spiking to 14.7% last month, and it could remain in double digits for the rest of the year.

Former acting White House chief of staff Mick Mulvaney said Tuesday that the country might have overreacted to the pandemic and that he would feel comfortable sitting in the middle seat on an airplane if people were wearing protective masks.

“We’ve overreacted a little bit,” Mr. Mulvaney said on CNBC. “It’s time to sort of deal with this in the proper perspective and that’s to allow us to get back to work safely.”

Congress has tried to prop up the economy by passing close to $3 trillion in rescue legislation in recent weeks, including direct payments of up to $1,200 for millions of Americans and a $600-per-week boost to regular unemployment checks.

White House senior adviser Kevin Hassett said this week that the administration is considering another round of direct payments to Americans, but that the economy might be in good enough shape to where the administration can move on to other priorities such as cutting capital gains and payroll taxes.

“Obviously, the virus is in charge still,” Mr. Kench said. “If we’re not prepared for the second wave and we take the mass closure route, that could be devastating to the economy.”

US stocks plummet at the open, as Fed fails to stem virus fears

US stocks plummet at the open, as Fed fails to stem virus fears

United States stocks sold off sharply on Monday, as the Federal Reserve’s surprise interest rate cut and other measures designed to shore up the economy against an onslaught of coronavirus disruptions failed to stem deepening fears. The S&P 500 – a reflection of the health of US pension accounts and college saving plans – fell… 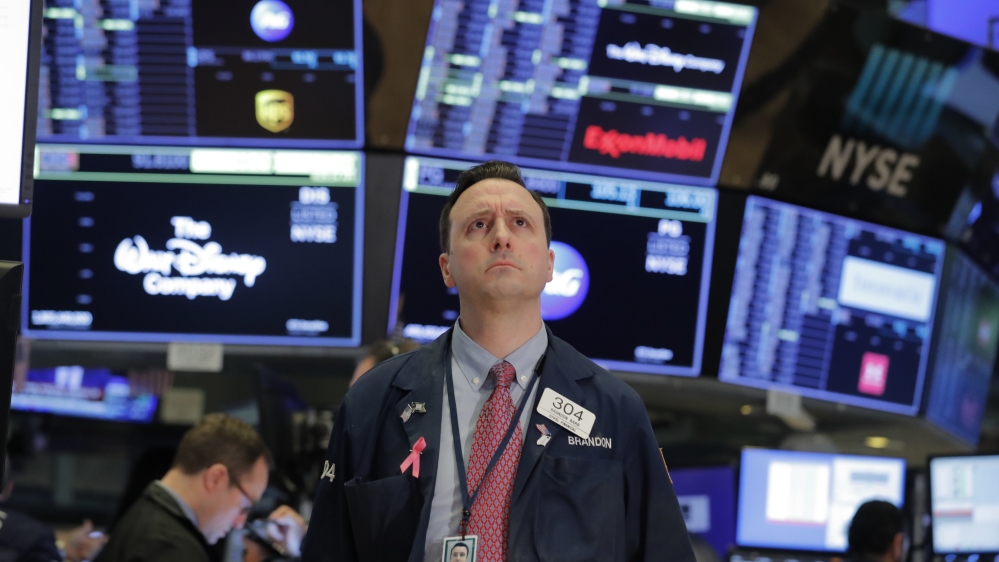 United States stocks sold off sharply on Monday, as the Federal Reserve’s surprise interest rate cut and other measures designed to shore up the economy against an onslaught of coronavirus disruptions failed to stem deepening fears.
The S&P 500 – a reflection of the health of US pension accounts and college saving plans – fell 8.1 percent at the opening bell in New York, triggering so-called circuit breakers that halt trading for 15 minutes. When trading resumed, losses extended, sending the index down 11 percent before it started digging out of that hole.
The Dow Jones Industrial Average plummeted more than 2200 at the open of trading, or 9.7  percent, while the Nasdaq Composite Index tanked 6.1 percent. Both indexes continued falling when trading resumed but started to pare losses in late morning trading.
More:

What we know so far about coronavirus

Coronavirus: All you need to know about symptoms and risks

Other markets are falling under heavy stress.
Precious metals – often seen as a safe haven during turbulent times – were not spared from the carnage, with spot gold prices down 3.8 percent at $1,470.28 an ounce.
Bitcoin also came under pressure after the Fed’s emergency moves, plunging as much as 18 percent before clawing back some of those losses.
The Fed pulled pages from its crisis-era playbook on Sunday, slashing interest rates to near zero and unleashing a handful of other measures designed to keep credit markets – which have been showing signs of stress in recent weeks – running smoothly.
Among the measures – the Fed decided to restart the programme of buying bonds from the US Treasury and mortgaged-backed securities markets. By supporting the smooth functioning of these markets, the Fed is attempting to help businesses and consumers access the credit they need to weather the coronavirus storm.
The Fed also slashed reserve requirements for thousands of US banks and eased conditions for banks at the discount window – again with the aim of helping financial institutes more easily meet demand for credit from households and businesses straining under the pressure of disrupted activity.
On a more global scale, the Fed in concert with 5 other central banks reduced the pricing on dollar swap lines to ensure that there is a sufficient amount of US dollars – the global reserve currency – to ensure that the markets for borrowing and lending greenbacks overseas do not become overly strained. If these market seize up, it could feedback into the US economy.
But with so many unknowns surrounding the coronavirus outbreak, investors took little solace from the Fed’s extraordinary actions.
“As the scale of the economic and market disruption wrought by the coronavirus becomes clear, it seems likely that investors will increasingly start to question whether policymakers have already exhausted their capacity to respond,” Capital Economics group chief economist Neil Shearing wrote in a client note this morning. “As we have noted before, history suggests that equity markets are only likely to bottom out when it becomes clear that the flow of new cases of the virus has peaked.”
Federal Reserve Chairman Jerome Powell told reporters on Sunday that he expects the US economy to post modest growth in the first three months of this year, but then experience a contraction in the second quarter. Beyond that, the Fed is in a wait and see mode.   A recession is defined as two consecutive quarters, or six straight months of negative economic growth.
Interest rate sensitive financial stocks led the charge lower on Wall Street as shares of JPMorgan Chase, Morgan Stanley, Citigroup and Bank of America all saw double digit percent declines in early trading.
Energy stocks were also under pressure again as the price of global benchmark Brent crude tanked around 10 percent to fall below $30 a barrel before recovering some ground.
And airline stocks continued to get pummeled as carriers slash services, cut costs and temporarily lay off workers.

The double-punch of crashing oil prices and the worsening global coronavirus outbreak pummeled investor confidence to the point of panic [File: Andrew Kelly/Reuters] We knew this could get really ugly. Now it has.  United States stock markets nosedived at the open of trading on Monday -triggering circuit breakers to halt trading- as the double-punch of… 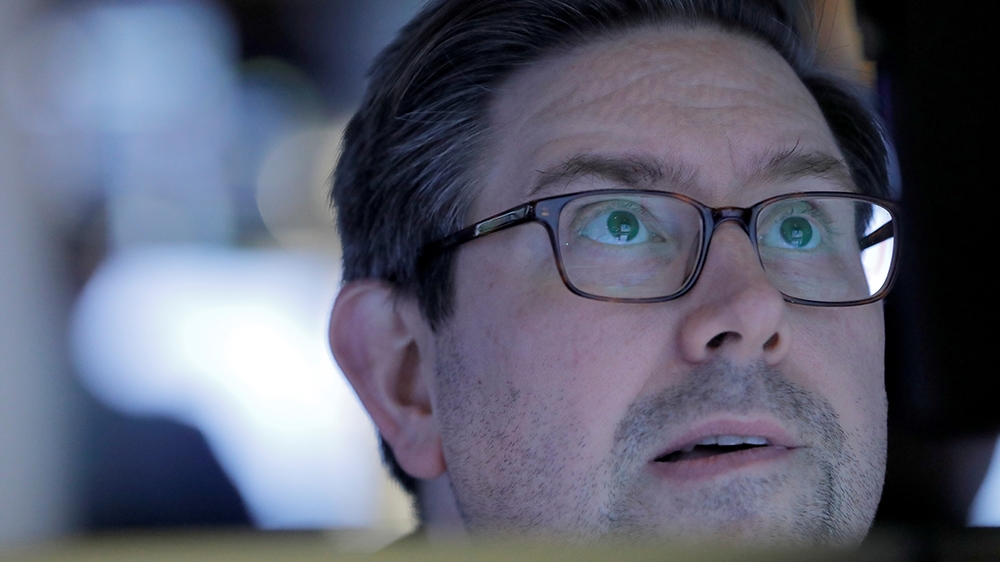