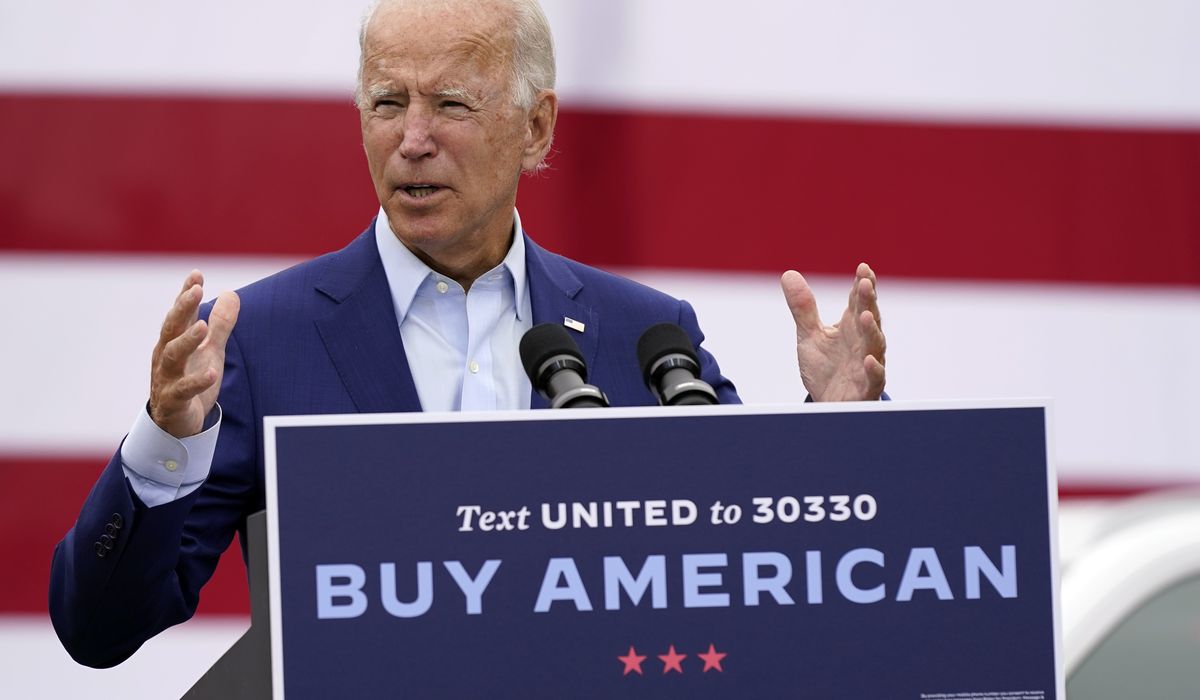 Joseph R. Biden pounced on the news Wednesday that President Trump purposely downplayed the threat of the coronavirus in the outbreak’s early stages, calling his conduct a “life and death betrayal of the American people.”

Mr. Trump’s confession in a forthcoming book by Bob Woodward — that he minimized the coronavirus threat to prevent mass panic — landed like a bombshell on the campaign trail, putting the president’s team on the defensive and providing Mr. Biden with fresh ammunition to blame him for the U.S. death toll from COVID-19, which passed 190,000 on Wednesday.

“He knowingly and willingly lied about the threat it posed to the country for months,” Mr. Biden said during a campaign stop in the battleground state of Michigan, where he was joined by members of the United Auto Workers.

“He knew how dangerous it was, and while this deadly disease ripped through this nation he failed to do his job on purpose,” the Democratic presidential nominee said. “It was a life and death betrayal of the American people.”

Mr. Trump knew in early February that the new coronavirus could be airborne and more deadly than the flu but wanted to minimize panic among the American people, according to Mr. Woodward, who is an associate editor at The Washington Post.

“I wanted to always play it down,” Mr. Trump told Mr. Woodward on March 19, according to audio clips of their discussion posted by CNN. “I still like playing it down, because I don’t want to create a panic.”

Dr. Anthony Fauci, the nation’s top infectious disease expert, also has acknowledged downplaying the threat of the virus in the name of the public good. In a June interview with The Street, Dr. Fauci said he wasn’t gung-ho about Americans racing out to get masks early on because the public health community was concerned that they were in short supply and could leave front-line health care workers more exposed.

“We did not want them to be without the equipment that they needed,” he said in an interview.

Dr. Fauci, director of the National Institute of Allergy and Infectious Diseases, defended the president by saying he doesn’t recall any difference between the discussions he had with Mr. Trump and what was said publicly.

“I didn’t see any discrepancies between what he we told [Mr. Trump] and what he told the public,” he said.

Mr. Woodward’s book, titled “Rage,” and tapes from the author’s interviews with Mr. Trump suggest the president — who faces reelection Nov. 3 — kept the public in the dark during crucial weeks, as the virus spread within the U.S.

At the White House, Mr. Trump said he was trying not to sow “panic” or “fear” as he responded at the end of January by restricting travel from China.

“We have to show leadership and the last thing you want to do is create a panic,” Mr. Trump said.

The president said the country has learned a lot about the disease and how to protect the vulnerable. He also blamed China for the scale of the problem.“It came out of China, it went to Europe, it went all over the world,” Mr. Trump said.

“The president has never lied to the American public on COVID. The president was expressing calm, and his actions reflect that,” she said.

The political impact of the coronavirus is a big wild card of the presidential race, and the book excerpts were released as Mr. Trump and Mr. Biden revved up the campaign in battleground states across the Midwest.

Claiming the mantle of a working-class warrior could go a long way toward determining the winner in Pennsylvania, Wisconsin and Michigan — states that have suffered from jobs moving overseas and increased automation.Mr. Trump is slated to visit Michigan on Thursday.

On Wednesday, Mr. Biden took his message to Warren, Michigan, hoping to score some points with independents in a Detroit suburb that has traditionally been a bastion of Reagan Democrats who could not stomach the idea of backing Hillary Clinton four years ago.

Mr. Biden is betting that his “Build Back Better” agenda, his ties to former President Barack Obama and the role he played in the auto industry bailout during the Great Recession could sway voters who embraced Mr. Trump’s “America First” message in 2016.

“People are going to look and say, ‘How is my pocketbook?’ and the answer for a lot of people is not so good. So they are going to be looking somewhere else other than President Trump for answers,” he said.

The Trump campaign says the president is the biggest advocate for American workers, highlighting that he delivered on his promise to rewrite the North American Free Trade Agreement and deserves credit for bringing jobs back to the United States and taking a hard line on China.

Mr. Biden’s support for NAFTA and normalizing trade relations with China shows that he doesn’t have a clue about the needs of workers and manufacturers, the campaign says.

“He was a primary driver of NAFTA, and from NAFTA’s passage until Trump’s election, the state of Michigan lost 210,000 manufacturing jobs,” Mr. Cortes said. “Folks, that is roughly equal to the population of Grand Rapids, which is the second-biggest city in the state of Michigan.”

The message was largely drowned out by the revelation that Mr. Trump was more aware of the threat from the coronavirus than he let on.

It conflicted with the public statements he started delivering in February that the virus was under control and could go away when the weather warmed.

Upon returning from a trip to India, he told White House reporters Feb. 25 that a handful of U.S. cases would drop to zero within days.

But his own security officials warned him on Jan. 28 that the virus discovered in Wuhan, China, was a huge threat, according to the Woodward book, set for release Sept. 15.

“This will be the biggest national security threat you face in your presidency,” National Security Adviser Robert O’Brien told Mr. Trump, in Mr. Woodward’s telling.

The president then outlined his concerns in a Feb. 7 conversation with Mr. Woodward — even though the author expected the president to focus on the recent impeachment trial.

“We’ve got a little bit of an interesting setback with the virus going in China,” the president said.

“It goes through the air,” Mr. Trump said. “That’s always tougher than the touch. You don’t have to touch things. Right? But the air, you just breathe the air and that’s how it’s passed. And so that’s a very tricky one. That’s a very delicate one. It’s also more deadly than even your strenuous flu.”

More than a month later, on March 9, Mr. Trump compared the situation favorably to the flu in a tweet. He said the flu kills up to 70,000 per year and the coronavirus toll was much lower at that point.

Ms. McEnany argued to reporters that Mr. Trump was always “clear-eyed” about the risks from the virus and took every step he could to mitigate it. She pointed to his early efforts to restrict travel from China and the record-breaking pace of vaccine development.

“I cannot believe he deceived the American people the way he did,” Mr. Schumer said. “How many people would still be alive today if he just told Americans the truth? He had an obligation to tell them the truth.”

Mr. Trump, who says Beijing could have stopped the virus from spreading, told Mr. Woodward that he shouldn’t shoulder the blame.

“The virus has nothing to do with me,” Mr. Trump told the author in their final interview, on July 21. “It’s not my fault.”

⦁ David Sherfinski and Victor Morton contributed to this report.