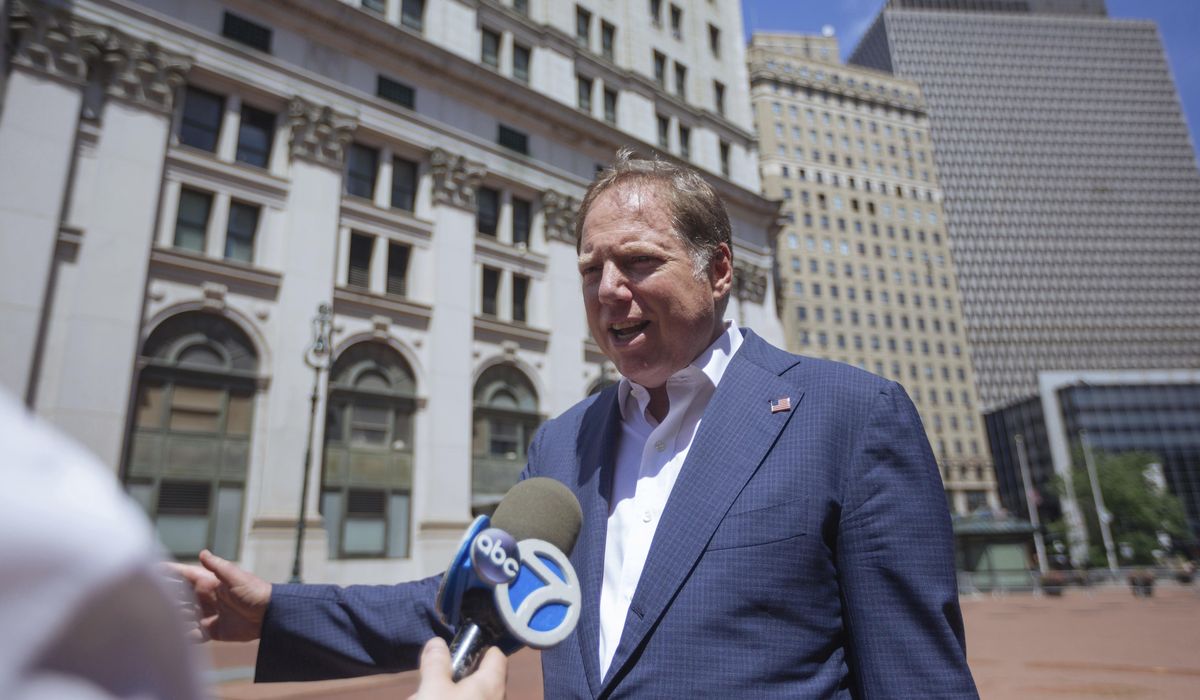 President Trump on Saturday officially fired the U.S. Attorney for the Southern District of New York, where Manhattan is located, Attorney General William P. Barr said in a letter.

But Mr. Trump, speaking to reporters, appeared to distance himself from the decision to terminate Geoffrey Berman, who is leading several high-profile investigations into the president’s allies.

The firing capped a wild Friday night and Saturday afternoon at the Justice Department in which Mr. Barr said he was replacing Mr. Berman, who fired back late Friday that he had no intention of resigning.

The standoff ended Saturday afternoon after Mr. Barr wrote a letter to the powerful federal prosecutor telling him he had been terminated by the president.

“Unfortunately, with your statement of last night, you have chosen public spectacle over public service,” Mr. Barr wrote in a letter obtained by The Washington Times.

“Because you have declared that you have no intention of resigning, I have asked the President to remove you as of today, and he as done so,” the letter continued.

Mr. Berman has not publicly responded to the letter as of Saturday afternoon.

Mr. Barr wrote he was “surprised and quite disappointed” by Mr. Berman’s statement to the press.

In a statement posted to Twitter just before midnight Friday, Mr. Berman said he had not resigned and had no intention to do so. He also vowed that his investigations will “move forward without delay or interruption.”

The attorney general threatened to unleash the Justice Department Inspector General — who investigates interference and wrongdoing by department employees — on Mr. Berman if he attempts to intervene in ongoing cases.

“Your statement also wrongly implies that your continued tenure in the office is necessary to ensure that cases now pending in the Southern District of New York are handled appropriately,” Mr. Barr wrote. “This is obviously false. I fully expect that the office will continue to handle all cases in the normal case and pursuant to the department’s applicable standards, policies, and guidance.”

“Going forward, if any actions or decisions are taken that officer supervisors conclude are improper interference with a case, that information should be provided immediately to Michael Horowitz, the Department of Justice’s Inspector General, whom I am authorizing to review any such claim,” Mr. Barr continued.

The attorney general has appointed Deputy U.S. Attorney Audrey Strauss to lead the office until a permanent successor is in place. On Friday, Mr. Barr said U.S. Attorney For New Jersey Craig Carpenito would leading the office. It is not clear if Mr. Carpenito will still serve as acting U.S. Attorney for the Southern District of New York.

Mr. Trump on Friday said he intended to nominate Jay Clayton, the head of the Securities and Exchange Commission to succeed Mr. Berman, pending Senate confirmation.

Mr. Barr has not explained why he wanted to oust Mr. Berman or replace him with Mr. Clayton, who has no prosecutorial experience.

“I wanted the opportunity to choose a distinguished New York lawyer, Jay Clayton to nominate as United States Attorney and was hoping for your cooperation to facilitate a smooth transition,” Mr. Barr wrote, failing to shed any more light on the decision.

Mr. Berman could have moved to a senior position within the Justice Department or serve as Chairman of the Securities and Exchange Commission, according to Mr. Barr’s letter.

Top lawmakers on Saturday blasted Mr. Barr and the president over the decision to sack Mr. Berman.

“He can allow himself to be used in the brazen Trump-Barr scheme to interfere in investigations by the U.S. Attorney for the Southern District of New York, or he can stand up to this corruption, withdraw his name from consideration, and save his own reputation from overnight ruin,” Mr. Schumer said in a statement.

Senate Judiciary Committee Chairman Lindsey Graham, South Carolina Republican, said he would wait to receive blue slips — a sheet of paper that indicates if a senator supports a nominee from their state — before advancing Mr. Clayton’s nomination.

That could give Mr. Schumer and Sen. Kirsten Gillibrand, New York Democrat, a chance to block the nomination by returning blue slips.

Mr. Graham said he had not been notified by the administration of its intent to nominate Mr. Clayton, who he described as a “fine man and accomplished lawyer.”

“As to processing U.S. Attorney nominations, it has always been the policy of the Judiciary Committee to receive blue slips from the home state senators before proceeding to the nomination,” Mr. Graham said in a statement.

“As chairman, I have honored that policy and will continue to do so,” the statement continued.

But Mr. Schumer said he’ll press for an investigation into the decision to remove Mr. Berman.

“I am calling for the Department of Justice Inspector General and the Office of Professional Responsibility to immediately launch an investigation into the reasons behind the decision by the president and the attorney general to attempt to dismiss Mr. Berman,” he said.

Preet Bharara, who preceded Mr. Berman as the U.S. Attorney for the Southern District of New York during President Obama’s tenure, said he was alarmed by the move.

Mr. Bharara also had his own scuffle with Mr. Trump when he also refused to step down from the same position. In his case, the Trump administration had also released a statement saying he had left office.

“Why does a president get rid of his own hand-picked US Attorney in SDNY on a Friday night, less than 5 months before the election?” he tweeted.

Federal prosecutors in Mr. Berman’s office are investigating the business dealings of Mr. Trump’s personal attorney Rudy Giuliani, including whether he failed to register as a foreign agent, according to media reports.

London, United Kingdom – The flags outside embassies have been lowered, the countdown clocks have stopped. The United Kingdom is no longer a member of the European Union. The country’s 47 years of membership officially ceased at the stroke of 23:00 GMT (midnight Brussels time), more than three and half years after an in/out referendum… 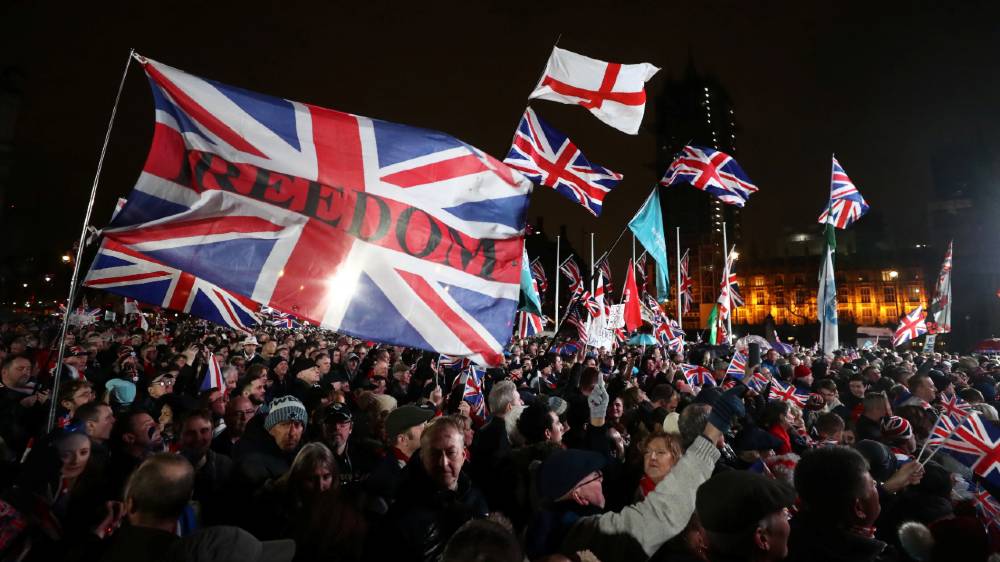 London, United Kingdom – The flags outside embassies have been lowered, the countdown clocks have stopped. The United Kingdom is no longer a member of the European Union.
The country’s 47 years of membership officially ceased at the stroke of 23:00 GMT (midnight Brussels time), more than three and half years after an in/out referendum exposed deep rifts across British society.
More:

Barnier: Brexit will be exercise in ‘damage limitation’

UK Prime Minister Boris Johnson marked the historic moment with his team at his Downing Street office, celebrating with English sparkling wine and an array of British culinary treats.
As the clock ticked down the final seconds, thousands of Brexiters celebrated outside Parliament and groups burned EU flags on the streets of London.
Anti-Brexit campaigners mounted several protests along the Irish border.
Under the terms of the withdrawal agreement between the UK and EU, Britain now enters a transition period until the end of 2020, meaning London will abide by most EU laws while their future relationship is hashed out.

Johnson must now achieve a trade deal with the EU – the world’s largest trading bloc – within 11 months, a task most experts have described as ambitious at best, but his wider mission over the next five years will be to find a way to repair the country’s divisions.
The years since the referendum have seen ugly scenes at protests and clashes between pro- and anti-Europe demonstrators, as well as bitter rhetoric dominating newspapers and appearing in Parliament, and fears of a return of Northern Irish paramilitary violence.
It’s not over yet
But those who think Friday’s official departure date marks an end to the chaos may yet be disappointed.
“We are not even at the halfway point in this process,” said Scott Lucas, professor of international politics at the University of Birmingham.
“We are only going into the tough negotiations with the European Union – on the economic relationship; on the status of Northern Ireland; on industry, agriculture, banking and finance,” he told Al Jazeera. “Even on basics such as will Britons have health insurance in Europe? What are the rights of EU citizens living here and of UK citizens living in Europe?”
Trade expert David Henig, the UK director of the European Centre for International Political Economy think-tank, agreed Johnson has a difficult task ahead of him.
“The UK government, having spent nearly four years deciding what it doesn’t want – to be members of the EU, have now given themselves less than a year to decide what they do want – in the shape of EU and US trade deals,” he told Al Jazeera. “It is a huge challenge, particularly in such a short time.”
‘Astonishing moment of hope’
Johnson himself, however, remained bullish, calling the UK’s withdrawal from the EU “an astonishing moment of hope” in a televised address to the nation.

“This is the moment when the dawn breaks and the curtain goes up on a new act in our great national drama,” he said.
“Of course, I think that is the right and healthy and democratic thing to do,” he added. “Because for all its strengths and for all its admirable qualities, the EU has evolved over 50 years in a direction that no longer suits this country.”
The prime minister called for “a new era of friendly cooperation between the EU and an energetic Britain”.
“When I look at the potential of this country waiting to be unleashed, I know that we can turn this opportunity into a stunning success. And whatever the bumps in the road ahead, I know that we will succeed.”
‘Boris Johnson owns Brexit’
Brexit has caused the downfall of two prime ministers. David Cameron resigned after the unexpected win for the leave camp. His successor, Theresa May was subsequently lambasted on all sides, with many who thought the withdrawal agreement her administration reached with Brussels either did not go far enough to cut ties with the EU, or did not protect British interests in the wake of the UK’s departure.
Johnson had to spend the first few months of his term in office battling a pugnacious Parliament while unable to command a ruling majority. He then won a sweeping general election victory in December under the slogan: “Get Brexit done.”
Mark Shanahan, head of the international politics department at the University of Reading said doing so would be Johnson’s “ultimate challenge”.
“Tonight the UK sets out on a journey into the unknown: zigging while the rest of the world zags,” Shanahan told Al Jazeera.
“With a mix of hubris, nostalgic nationalism and cussed optimism, we set sail on a voyage with no clear ending. For the next 11 months, the UK will be the EU’s rule-taker, subject to all of the same regulations, but with no vote, no voice and no veto,” he said.
The UK wants a friction-free trade deal with Europe at the same time as sorting trade deals with the United States and the Commonwealth, while retaining jobs, inward investment and boosting public services, he added.
“Is it possible? Yes. Is it likely? No. Something will have to give, and there will be many compromises to be made. Chutzpah and optimism will not be enough. Now is the time to back snappy sloganising with substance. Fail, and the UK will break with the prospect of a United Ireland and independent Scotland. Boris Johnson owns Brexit. The new dawn presents his ultimate challenge.”
Continue Reading…