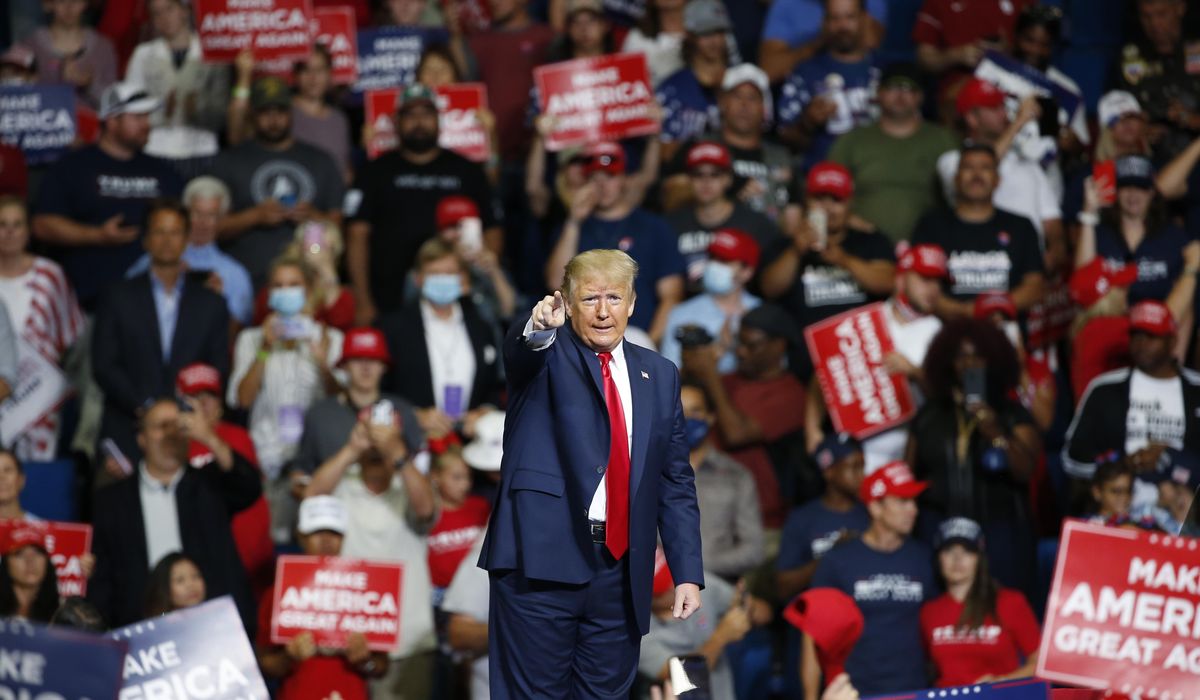 President Trump is beating Joseph R. Biden in voter enthusiasm, and media-sponsored polls that show the Democrat with a big lead are flawed and wrong, a top Trump campaign official said Sunday.

With a little more than four months to go before Election Day, Trump deputy campaign manager Bill Stepien said in a memo that Mr. Biden’s candidacy “has a decided lack of enthusiastic support as compared to President Trump.”

Mr. Stepien also said public polling sponsored by media companies “is based on cheaper, inferior methods and should rightly be viewed as flawed and non-predictive.” A New York Times/Siena poll last week showed Mr. Biden with a 14-point lead nationally over the president among registered voters.

The memo comes just a week after Trump campaign officials acknowledge that they made a mistake in hyping the president’s comeback rally in Tulsa, Oklahoma to be attended by a likely overflow crowd. There were thousands of empty seats in the arena.

But Mr. Stepien said the trend of voting in primaries this year shows the president “enjoys historic support among Republicans,” and Democratic voters “continue to offer unenthusiastic reactions” to Mr. Biden.

He said Mr. Trump has received more votes than former President Barack Obama in 23 of the 27 states which have held primaries in both 2020 and 2012, the year that Mr. Obama ran for reelection. “President Trump has historic support within his own party,” Mr. Stepien said. “He has already won over two million more votes than his total in the 2016 primaries, setting a record for most votes ever cast for an incumbent president.”

Mr. Biden and his campaign “have yet to inspire or coalesce their own base,” Mr. Stepien said, even in primaries after Sen. Bernard Sanders of Vermont quit the Democratic race. In those primaries in which he was essentially unopposed, Mr. Biden’s share of the vote total ranged from 55% in Alaska to 85% in Georgia.

“In primary after primary, an alarming number of Democrat voters have cast votes for someone other than their own party’s presumed nominee,” Mr. Stepien said. “After more than eleven weeks as the presumed nominee, Biden is still struggling to unify Democrats behind his candidacy. The real conclusion to be drawn is that, despite having no opponent actively campaigning for over two months, the former vice president faces vibrant disunity within his own party.”

He asserted that the lack of enthusiasm among Democrats for Mr. Biden “does not portend well for the November turnout needed to defeat an incumbent President with an enthusiastic base.”

“The only presidential candidate this century to have an enthusiasm edge and still lose was Mitt Romney in 2012,” Mr. Stepien said. “Today there can be no debate that President Trump has a decided advantage in base enthusiasm and can be most confident that his supporters will turn out.”

On polling, Mr. Stepien said the mainstream media “is relying on polling financed by their own operations and others, released publicly in order to set a narrative that conforms with their own worldviews.”

“Generally speaking, public pollsters are extremely cost conscious, limited in scope in what they are able to do, and thus unable to match some of the more high-quality polling standards of private pollsters,” he said. “We know the media loves to play the game of using their public polling to create an unfavorable scenario and to attempt to discourage President Trump’s supporters….. As we have repeatedly stressed, our own data shows that the president remains strong in our key states against a defined Joe Biden.”