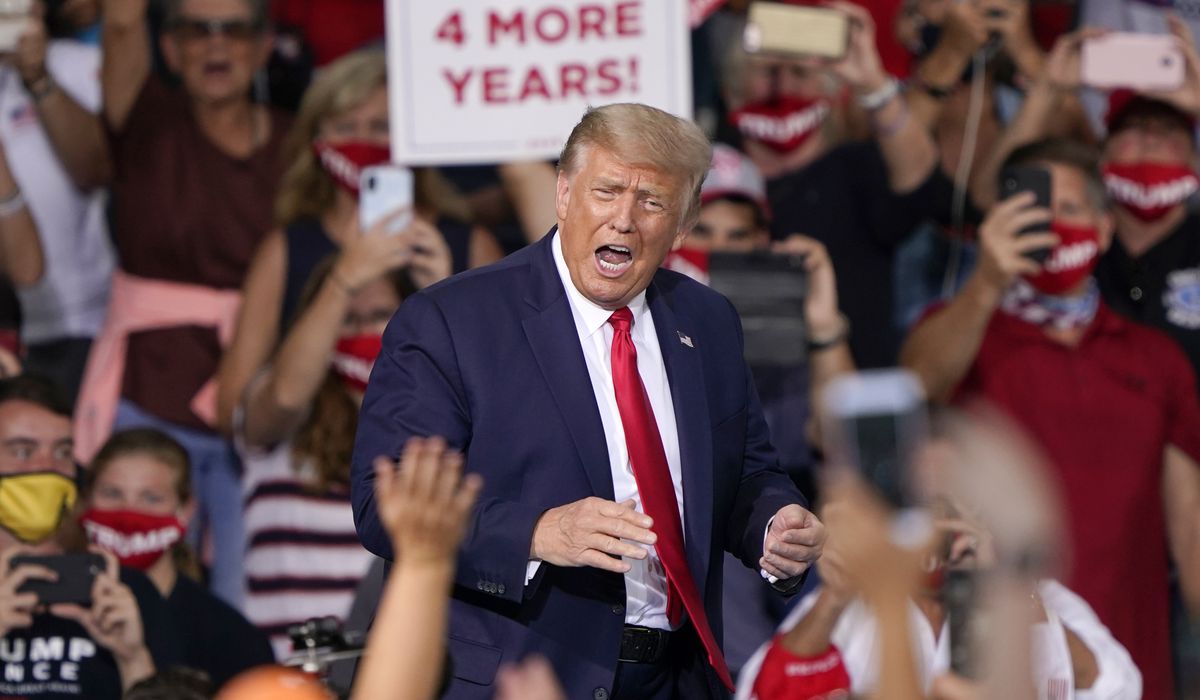 President Trump began an eight-week sprint to Election Day on Tuesday by campaigning in the crucial battlegrounds of Florida and North Carolina, arguing that Democratic rival Joseph R. Biden “doesn’t have the strength” to stand up to left-wing rioters as president.

The president seized in particular on an incident this weekend in Pittsburgh — another swing state — in which Black Lives Matter demonstrators accosted an older White couple at an outdoor cafe and hurled profanities, made obscene gestures and drank the couple’s beverages.

“Next time you see video of screaming far-left maniacs shouting wildly at peaceful Americans, remember this: these are Biden’s supporters,” Mr. Trump said at a campaign rally in Winston-Salem, North Carolina. “If he wins, they will be in charge of your government.”

The president said suburbs “would be overwhelmed with violence and crime” if Mr. Biden is elected.

“The suburbs are coming big to us, because the suburbs are next [for the rioters],” Mr. Trump said. “I don’t think the Democrats have the courage to control these people. They’re afraid to even talk about law and order.”

The president’s top campaign advisers on Tuesday laid out seven pathways for the president to win reelection, ranging from a 37-state landslide of 356 electoral votes to a razor-thin margin of two electoral votes over Mr. Biden. Although the Democrat is leading in most public polls, Trump officials said they are especially encouraged by surveys showing a significant increase in the percentage of voters who view Mr. Biden as “very liberal.”

“That has been a strategic objective of our campaign,” said Trump campaign manager Bill Stepien.

Florida, which falls into the president’s column in five of the seven scenarios, is tied at 48% apiece in an NBC/Marist poll released Tuesday. Mr. Biden’s lead in Florida in the RealClearPolitics average of polls is down to 1.4 points from a high of 8.4 points in late July.

As the president embarked on a 10-hour swing through two states with a total of 44 electoral votes up for grabs, Mr. Biden’s campaign called a “lid” for the day at 8:10 a.m. That meant the front-runner wasn’t holding any campaign events or traveling from his home in Delaware.

Republicans said it was another example of Mr. Trump, 74, outworking the 77-year-old Democratic nominee on the campaign trail. Sen. John Cornyn, Texas Republican, poked fun at Mr. Biden for ending his campaign day at a time when many people are finishing breakfast. “Just asking for a friend, should this be [8:10] P.M.?” he said in a Twitter post.

Trump campaign officials said the president, Vice President Mike Pence and members of the first family will hold 18 events in 11 contested states over the next six days. The president said he will soon do “triples” — three states or three events in a day.

“This schedule is a testament to our commitment to outwork the Biden campaign, [which] still seems content with doing Zoom calls and some select, pre-scripted, above-the-ground outings,” said Nick Trainer, the Trump campaign’s director of battleground strategy.

Mr. Biden has addressed criticism, even by some Democrats, about his now-and-then campaign schedule by saying a president must “set the right example for how to go out” during the COVID-19 pandemic.

“Masks, not to have large crowds of people standing next to him, not to have the potential of a cauldron of significant outbreaks of COVID,” he said last week.

At an event in Jupiter, Florida, the president suggested during a discussion of gun rights that Mr. Biden is worn out.

“We will protect your right to keep and bear arms, your Second Amendment,” the president told supporters. “And I can tell you this: If Joe Biden gets in, he’ll have nothing to say about it. Let’s face it, Joe’s shot.”

Mr. Trump traveled to Florida’s east coast to sign an executive action extending a moratorium on oil and gas drilling in the eastern Gulf of Mexico and expanding the ban to the Atlantic coasts of Florida, Georgia and South Carolina, in an announcement that caught many by surprise. The president has been promoting more energy exploration for most of the past four years and sought to open the Atlantic coastline to more drilling as recently as 2018.

“Thanks to my administration’s pro-American energy policies, we can take this step … while remaining the No. 1 producer of oil and natural gas anywhere in the world,” Mr. Trump said. “We are energy independent.”

The move is popular in tourist-dependent Florida, where officials worry about the possibility of oil from a spill fouling beaches. The president said his action also should please residents in Georgia, South Carolina and North Carolina.

While North Carolinians won’t have to worry about oil spills from South Carolina waters, the state wasn’t included in the executive action. In June, the federal government approved offshore seismic testing for oil and gas deposits off the North Carolina coast.

Mr. Biden said in a statement that the president “has eliminated rules designed to keep our air and water clean.”

“And, dangerously, he has opened up additional public lands, both on land and offshore, to the possibility of new oil and gas drilling, a deeply unpopular threat to Florida’s natural environment and tourism-based economy,” he said.

“It’s clear why China and the flag-burning rioters want Biden to win,” Mr. Trump said. “They know his policies will be the downfall of America, and they know my policies will lift America to new heights of national greatness. They’re coming after me because I’m fighting for you. Joe Biden’s agenda is Made in China — my agenda is Made in America!”

The NBC News/Marist poll in Florida showed a weakness for Mr. Biden with the state’s Hispanic voters. Among that group, Mr. Trump leads 50% to 46%, a major shift from 2016, when Hillary Clinton beat Mr. Trump by more than 25 points among Hispanics.

Another poll this week by the Miami Herald and Bendixen & Amanda International showed Mr. Trump performing better than he did in 2016 with Hispanic voters in Miami-Dade, the state’s most populous county. The survey showed Mr. Trump at 47% among Hispanics and Mr. Biden at 46%, mostly on the strength of conservative Cuban-Americans, who favor the president by 38 points. In 2012, Cuban-American voters split almost evenly between Republican Mitt Romney and President Obama.

The Miami Herald poll showed Mr. Trump losing Miami-Dade by 17 points. But four years ago, he lost the region by 30 points and still won the state.

There were positive developments for Mr. Biden in the NBC News/Marist poll. The Democrat received 49% support from seniors, compared with 48% for Mr. Trump. In 2016, the president won older voters in Florida by 17 points over Mrs. Clinton.

The president also took aim Tuesday at Democratic vice presidential nominee Sen. Kamala D. Harris of California, saying she’s the most liberal Democrat in the Senate and it would be “an insult to our country” if she someday became president.

“She could never be the first woman president,” Mr. Trump said.