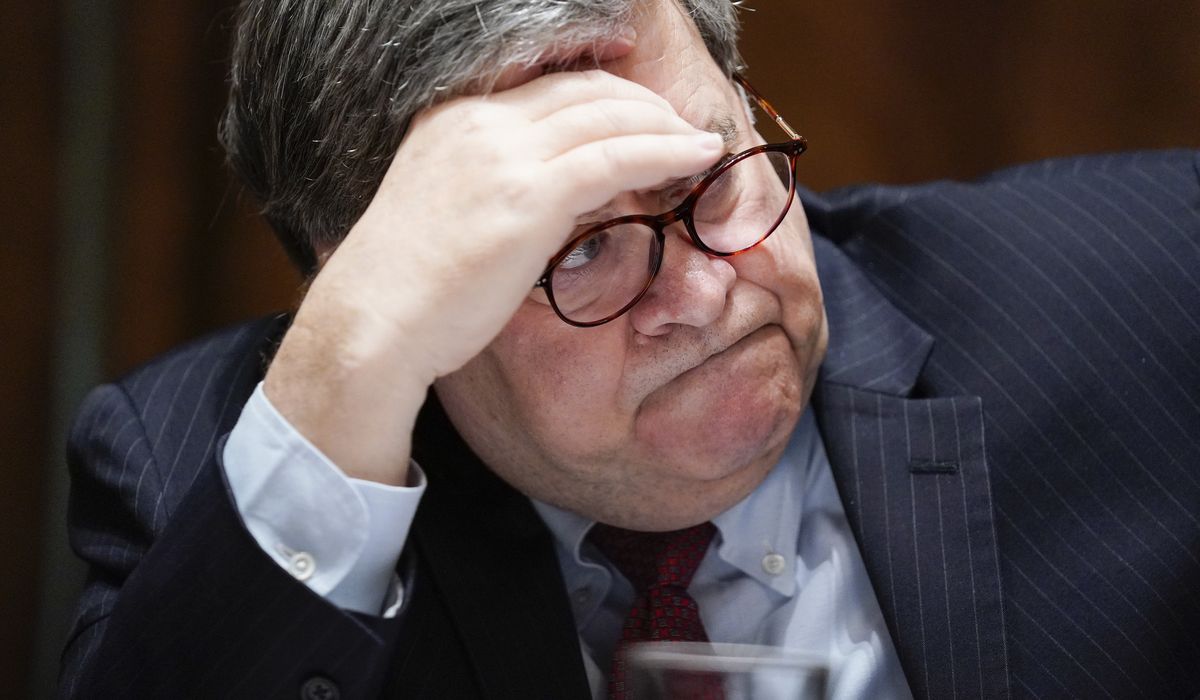 Attorney General William Barr may have one particular storyline in mind when he says liberal media were doing “all they could to sensationalize and drive” the empty Russia scandal: the Mayflower Hotel.

In the end, perhaps no other anti-Trump story involving Russia promised so much only to produce investigative findings of virtually nothing.

Mr. Barr has been on a two-pronged mission. He has publicly excoriated the FBI for what he characterizes as “sabotaging” the Trump presidency. He has vowed to find out what happened through special investigator John Durham, who is examining how the bureau started the probe.

Mr. Barr has long contended that the FBI lacked evidence to open such a momentous criminal project targeting the president’s campaign, transition and presidency. Democrats and the liberal press have questioned the need for Mr. Durham.

Mr. Barr now has added a third prong: He is zeroing in on what he considers liberal media overkill in light of the fact that special counsel Robert Mueller found no Trump-Russia election conspiracy.

“I agree with you that it’s been stunning that all we have gotten from the mainstream media is sort of bovine silence in the face of the complete collapse of the so-called Russiagate scandal, which they did all they could to sensationalize and drive,” Mr. Barr told Fox News host Maria Bartiromo. “And it’s, like, not even a ‘whoops.’ They’re just onto the next false scandal. So, that has been surprising to me: that people aren’t concerned about civil liberties and the integrity of our governmental process.”

On NPR on Thursday, he called news media part of the “mob.”

“And these days, the media is very prominent among the mob, who either want someone hung or they want him sprung,” he said. “And part of what the Department of Justice is about and the attorney general is about is ignoring the mob and the calls and the false narratives, and doing in each case what they think is right.”

A year later, in the spring of 2017, the Mayflower became one of the hottest media topics on ties between Mr. Trump and Russia. Reporters began churning out scores of accusatory stories. That March, then-FBI Director James B. Comey announced that the entire Trump apparatus was under scrutiny for any links to Russia. Trump aides say that from that day forward, they felt like they had a target on their back for any time they ever talked to a Russian.

Here is a sampling of Mayflower stories:

⦁ NBC News: “Five current and former U.S. officials said they are aware of classified intelligence suggesting there was some sort of private encounter between Trump and his aides and the Russian envoy, despite a heated denial from Sessions, who has already come under fire for failing to disclose two separate contacts with Kislyak.”

⦁ The Independent, a British news website: “The meeting between the two men took place while Mr. Trump was at the Mayflower Hotel in Washington April 27, 2016. The reports directly contradict the president’s repeated denials about contact with Russian officials prior to his election.”

⦁ Bloomberg News: “President Trump met last April with the Russian ambassador at the center of a pair of controversies.”

⦁ HuffPost: “It is not clear what Trump and Kislyak discussed, or how extensive the interaction was.”

⦁ Newsweek: “Sessions’s lies about his Russia Contacts: Chapter and Verse … Lying to Congress is a felony and special counsel Robert Mueller may have jurisdiction here since these statements materially relate to the investigation of Trump campaign relations with Russia.”

⦁ CNN: “Investigators on the Hill are requesting additional information, including schedules from Sessions, a source with knowledge tells CNN. They are focusing on whether such a meeting took place April 27, 2016, at the Mayflower Hotel in Washington, DC, where then-candidate Donald Trump was delivering his first major foreign policy address.”

⦁ The Washington Post: Intercepts of Mr. Kislyak’s phone calls to superiors has him saying he talked about the 2016 campaign with Trump aides at the Mayflower.

“Current and former U.S. officials said that that assertion is at odds with Kislyak’s accounts of conversations in two encounters during the campaign, one in April ahead of Trump’s first major foreign policy speech [at the Mayflower] and another in July on the sidelines of the Republican National Convention,” The Post said.

⦁ The New York Times: “The origin of the Mayflower story can be traced, according to several American officials, to raw intelligence picked up by American spy agencies last year that is now held at C.I.A. headquarters in Virginia. The intelligence appears to be based on intercepts of Mr. Kislyak discussing a private meeting he had with Mr. Sessions at a Trump campaign event last April at the luxury hotel.”

Besides briefly greeting Mr. Kislyak, as well as other ambassadors, at the Mayflower, Mr. Trump had no foreign contacts and left immediately after the speech, according to the special counsel’s report in March 2019. In all, Mr. Mueller found no Trump-Russia conspiracy to interfere in the 2016 election.

Here is how the VIP receiving line worked, said Mr. Mueller: “Sessions first stood next to Trump to introduce him to the members of Congress who were in attendance. After those members had been introduced, Simes stood next to Trump and introduced him to the CNI invitees in attendance, including Kislyak. Simes perceived the introduction to be positive and friendly, but thought it clear that Kislyak and Trump had just met for the first time.”

In other words, when the diplomats greeted Mr. Trump, Mr. Sessions had left the receiving line. It was Mr. Simes who invited the diplomats.

Mr. Mueller footnoted the NBC report, as well as a report in The Atlantic, which said Mr. Sessions had met with Mr. Kislyak at the Mayflower.

“The office found no evidence that Kislyak conversed with either Trump or Sessions after the speech, or would have had the opportunity to do so,” the Mueller report said. “Simes, for example, did not recall seeing Kislyak at the post-speech luncheon, and the only witness who accounted for Sessions’ whereabouts stated that Sessions may have spoken to the press after the event but then departed for Capitol Hill.”

Another witness told the Mueller team, “Trump left the hotel a few minutes after the speech to go to the airport.”

Mr. Mueller wrote about the Mayflower event and Mr. Kislyak’s attendance at the Republican National Convention, a trip organized by the Obama administration’s State Department for scores of diplomats.

The Mueller report: “The office investigated several other events that have been publicly reported to involve potential Russia-related contacts. For example, the investigation established that interactions between Russian Ambassador Kislyak and Trump campaign officials both at the candidate’s April 2016 foreign policy speech in Washington D.C. and during the week of the Republican National Convention were brief, public and non-substantive.”

Concerning Mr. Sessions’ brief meeting with Mr. Kislyak in his Senate office, the Mueller report said, “The investigation also did not establish that a meeting between Kislyak and Sessions in September 2016 at Sessions’ Senate office included any more than a passing mention of the presidential campaign.”

After the Mayflower press frenzy, Mr. Sessions, then the attorney general, testified before the Senate that June.

“I did not have any private meetings, nor do I recall any conversations with any Russian officials at the Mayflower Hotel,” Mr. Sessions said. “I did not attend any meetings at that event. Prior to the speech, I attended a reception with my staff that included at least two dozen people and President Trump. Though I do recall several conversations I had during that pre-speech reception, I do not have any recollection of meeting or talking to the Russian ambassador or any other Russian officials.”

Mr. Barr continued his criticism of the press last week during an appearance on the podcast “Verdict with Ted Cruz,” a Senate Republican from Texas.

“One of the stunning things, I’m sure you’ll agree, is that the media just went hellbent for leather on pushing this Russiagate story that Trump was essentially an agent of Russia,” Mr. Barr said. “And they were merciless. And up until recently you had former senior government officials sort of talking knowingly about how the president was going to be indicted and so forth and so on. Is there anyone standing up now saying that President Trump is an agent of a foreign power? Whoops. They got it wrong. And you wouldn’t know that ‘cause there has been no retraction, no readjustment by the media. … They’re just on to the next false scandal because their purpose seems to be to cripple this administration and drive it from office at any cost.”

The Mueller report provided no evidence that Mr. Trump, during his long career as a hotel and golf course developer, was ever a spy or an informant for Russia, or that he even interacted with Kremlin officials. The Trump Organization has never built anything in Russia.

On Monday, White House press secretary Kayleigh McEnany called on The Washington Post and the New York Times to return their Pulitzer prizes for their Russia coverage, saying that much of it was inaccurate.