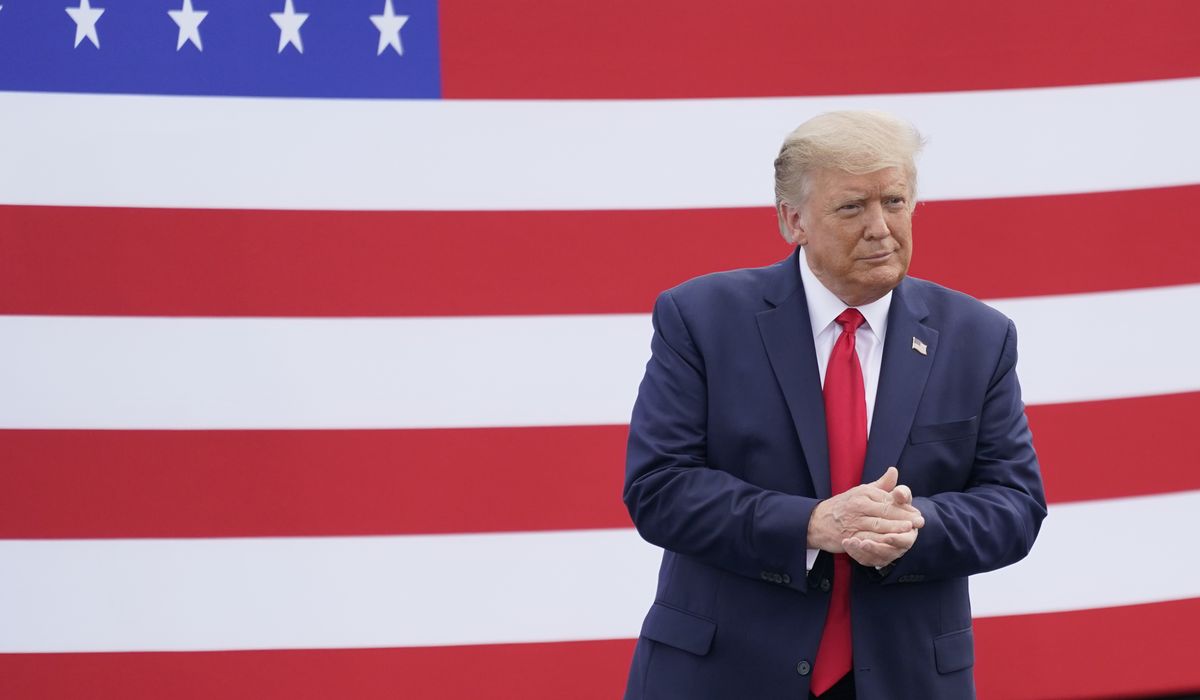 A Norwegian politician announced Wednesday that he nominated President Trump for the 2021 Nobel Peace Prize, citing Mr. Trump’s brokering of a historic normalization of relations between the United Arab Emirates and Israel.

Mr. Trump and the White House hailed the announcement, and bookmakers quickly scrambled to readjust his odds to win a prize that has been given to just four other U.S. presidents.

Christian Tybring-Gjedde, a far-right member of the Norwegian parliament, said the UAE-Israeli agreement can open the door for broader peace deals in the Middle East.

“No matter how Trump acts at home and what he says at press conferences, he has absolutely a chance at getting the Nobel Peace Prize,” said Mr. Tybring-Gjedde, who also nominated Mr. Trump for the award in 2018 for his diplomatic efforts to denuclearize North Korea.

“For his merit, I think he has done more trying to create peace between nations than most other Peace Prize nominees,” Mr. Tybring-Gjedde told Fox News.

In his nomination letter to the Nobel Committee, Mr. Tybring-Gjedde also cited Mr. Trump’s “key role in facilitating contact between conflicting parties and … creating new dynamics in other protracted conflicts, such as the Kashmir border dispute between India and Pakistan, and the conflict between North and South Korea, as well as dealing with the nuclear capabilities of North Korea.”

The recipients of the 2020 Nobel prizes are set to be announced next month.

The nominations can be submitted by politicians, heads of state, university professors and previous winners, among others.

The White House trumpeted the nomination as a testament to the president’s “bold” vision on diplomacy.

“There’s a tremendous sense of optimism in the Middle East and people thinking about what is possible and how can we move forward to improve our respective countries, bring the region together, settle old disputes and create new futures and new opportunities,” Mr. Kushner, who has been deeply involved in the Middle East peace talks, told reporters on a conference call.

The Norwegian Nobel Committee doesn’t publicly comment on nominees. Under its rules, the information is required to be kept secret for 50 years.

Ethiopian Prime Minister Abiy Ahmed Ali won the award last year “for his efforts to achieve peace and international cooperation, and in particular for his decisive initiative to resolve the border conflict with neighboring Eritrea.”

Betfair, an online gambling website, said Wednesday that after Mr. Trump’s “shock inclusion,” he is now a 20-1 favorite to win the prize.

The World Health Organization, which has emerged as a leading global voice during the COVID-19 pandemic, was a narrow favorite to win, at 5-2.

Greta Thunberg, the 17-year-old Swedish climate activist who has tangled with Mr. Trump and was also nominated for the award last year, was close behind at 3-1, and New Zealand Prime Minister Jacinda Ardern was at 5-1.

The Black Lives Matter movement was at 16-1.

Rep. Michael Waltz, Florida Republican, said that by all rights Mr. Trump could win if he gets a fair shake.

“President Obama got it for basically existing and blinking, so if you look at the actual accomplishments — which really is the story of [Trump’s] presidency — you look at what he is actually getting done compared to all the rhetoric that’s out there, and it’s incredible,” Mr. Waltz said on Fox News.

Mr. Tybring-Gjedde acknowledged that Mr. Trump likely faces an uphill climb in winning over the committee.

“It is now to hope that the Nobel Committee is able to consider what Trump has achieved internationally and that it does not stumble in established prejudice against the U.S. president,” he said.

James Carafano, a foreign policy expert at the Heritage Foundation, said the nomination was interesting but that the prize itself has lost some credibility.

“I think under the old standards of where the Nobel Prize actually reflected an actual achievement as opposed to just a political sentiment of the people giving the award, yeah, of course it would merit consideration,” Mr. Carafano said.

The five-member Norwegian Nobel Committee, which decides on the Peace Prize, is appointed by the Norwegian parliament.

Committees based in Sweden select the Nobel Prize winners in other categories such as physics and chemistry.

Mr. Trump would be the fifth U.S. president to be awarded the Peace Prize.

President Obama won the prize in 2009 for his “extraordinary efforts to strengthen international diplomacy and cooperation between peoples.”

Many critics, and even Mr. Obama himself, said the award was likely premature for the newly sworn-in president.

“It’s not like you’re a dissident who’s been in prison,” Mr. Carafano said. “I think they need to do some soul-searching. Maybe this is a part of restoring credibility to the Nobel Prizes. They’re actually going to give the award [based] on achievement and they’ll maybe even consider giving it to somebody they don’t like.”

Theodore Roosevelt was awarded the prize in 1906 for helping broker peace in the Russo-Japanese War, and Woodrow Wilson won it in 1919 after helping establish the League of Nations.

Jimmy Carter was honored in 2002, well after he left office, “for his decades of untiring effort to find peaceful solutions to international conflicts, to advance democracy and human rights, and to promote economic and social development.”

Mr. Trump has talked about getting the award for his historic summit with North Korean Leader Kim Jong-un but appears resigned to the fact that he is an underdog.

“I’ll probably never get it, but that’s OK,” Mr. Trump said last year. “They gave it to Obama. He didn’t even know what he got it for.”