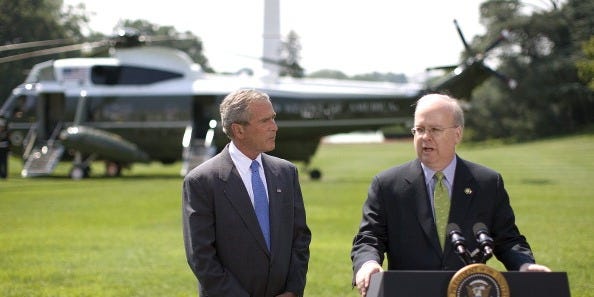 The longtime GOP operative known as “Bush’s brain” isn’t being paid by the Trump campaign, one Republican familiar with the arrangement said, adding that Rove has an incentive to work for the current commander in chief because it provides an opportunity to keep his name in the mix as the next GOP candidates start looking to staff up their campaigns for 2024.

“Rove is looking at the bigger picture, and there is life after Trump,” the Republican said.

Even for Trump’s orbit, Rove’s decision to help Trump is an odd pairing and one many Republicans around Washington either didn’t know or want to talk about. Trump hasn’t hidden his disdain for his two most recent GOP presidential predecessors, neither of whom voted for him in 2016.

During his last campaign, Trump famously savaged the Bush family to the point where he didn’t attend the 2018 funeral of its matriarch, former first lady Barbara Bush, and was only reluctantly invited to former President George H.W. Bush’s funeral a few months later. Trump earlier this month responded to a video from former President George W. Bush calling for unity in the country amid the coronavirus pandemic by chiding him for not speaking up on his behalf during his impeachment.

Republicans familiar with the Rove-Trump alliance said it’s as much about political convenience as it is party loyalty. While many establishment members of the GOP dislike Trump’s demeanor and affinity for scandals, Rove and others view the president in the same light as they did in 2016 as a far better alternative to a Democrat in the White House. For the Trump campaign, Rove’s informal role adds decades of institutional knowledge about winning national elections and an inherent entry point for otherwise skeptical party stalwarts.

Rove did not comment for this story, but asked about this report six hours later on Fox News Radio, he downplayed his role with the campaign.

Asked by Fox News Radio host Guy Benson if it would be “fair to say you are occasionally informally advising the Trump campaign?” Rove replied, “I think even that’s too far. Occasionally Brad is kind enough to call me and to say, ‘What do you think about this?’ And I’m happy to give him my unvarnished advice and he can do with it what he will.”

The Trump campaign did not immediately return a request for comment Thursday.

Rove has been a mainstay in GOP politics for four decades, most famously through his connections to the Bush family. George W. Bush, who endearingly nicknamed Rove “Turd Blossom,” leaned on him during an unsuccessful congressional bid in 1978 and later used him as a key adviser during winning runs for governor of Texas and then president.

Since he left the Bush White House in summer 2007, Rove has been an outspoken conservative commentator and a key behind-the-scenes figure in helping the GOP build out a data-heavy operation to find, persuade, and turn out voters. He appears regularly on Fox News as a contributor to the conservative network, often making headlines defending Trump and slamming Democrats. On Monday, he criticized a virtual commencement speech by former President Barack Obama, calling it a “political drive-by shooting.”

Rove’s role helping the Trump campaign has been largely kept under wraps. Last weekend, The New York Times reported that Rove attended a meeting with Trump and other political advisers where he told the president he’d fallen behind on messaging critical of the presumptive 2020 Democratic nominee, former Vice President Joe Biden.

His efforts come as Trump campaign advisers are concerned about a new round of polling due out from the president’s 2020 pollster Tony Fabrizio, which is expected to show that Trump is continuing to have problems in the critical battlegrounds of Pennsylvania and Michigan, two longtime Democratic-leaning states he won in the last election en route to an upset for Hillary Clinton.

Trump’s dip in the polls following the onset of the coronavirus pandemic sparked increased chatter among Republicans that Parscale could be in danger of getting pushed aside in the campaign. But Republicans close to the tight-knit group running Trump’s reelection bid said the rumors were inflated and that Parscale and Kushner maintained a tight grip on their power while reporting directly to the president.

Despite the two seeming to be worlds apart, Parscale and Rove do share a connection that’s been pivotal to the party’s success at winning elections. Trump’s campaign manager started working for the Trump family business as a web developer before transitioning during the 2016 race to take on a raft of new responsibilities connected to voter outreach, digital messaging, and advertising.

For his part, Rove won plaudits for driving voters to turn out in 2004 through the use of “microtargeting” — cross-checking consumer data against traditional voter metrics like age, sex, and party registration — a technique credited with helping Bush secure a second term. Rove later institutionalized that work at the Republican National Committee by helping create the Data Trust, a repository for information about GOP-inclined voters.

While Rove had talked occasionally with Trump during the 2016 campaign and after he became president, his coordination with Parscale started picking up after the 2018 midterm elections as the president’s focus turned to the reelection campaign.

Rove’s 2020 work isn’t just about Trump. He’s also working with the president’s campaign to help push resources down the ballot to House and Senate races in play in November. That’s something Trump’s often criticized 2016 campaign team was unable to do in the chaos of the last presidential election cycle, a Republican familiar with the effort said.

The former Bush aide is also backing Trump from outside the campaign. The super PAC Rove helped start, American Crossroads, is taking the president’s side this cycle after sitting out the 2016 race. So far, American Crossroads has spent $367,000 in the 2020 race supporting Trump, according to data compiled by the Center for Responsive Politics.

Trump Said He’d Force Governors to Open Churches ‘Right Now,’ Even Though That’s Not a Thing He Can Do