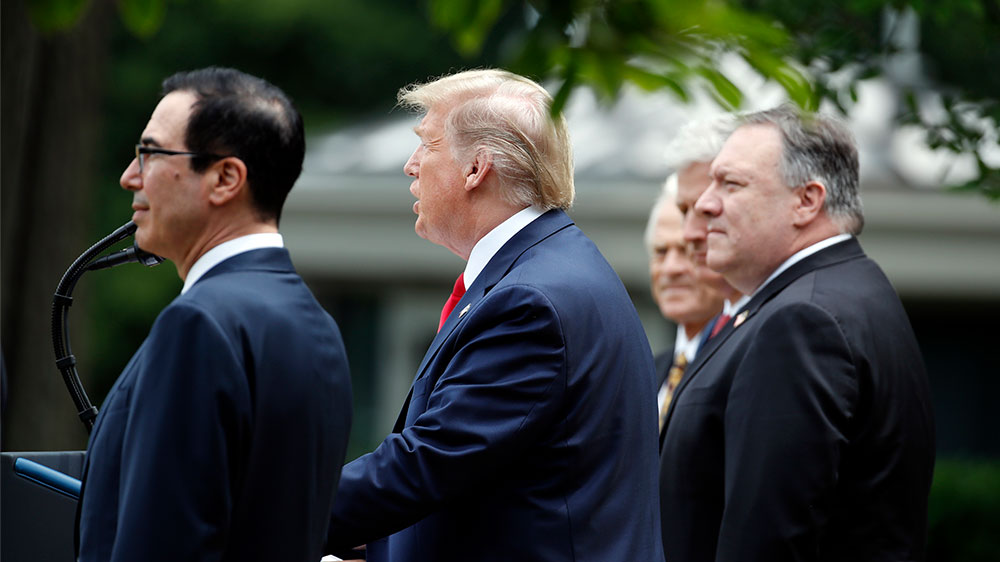 United States President Donald Trump on Friday said he was directing his administration to begin the process of eliminating special treatment for Hong Kong in response to China’s plans to impose new security legislation in the territory.
Trump made the announcement at a White House news conference, saying China had broken its word over Hong Kong’s autonomy. He said its move against Hong Kong was a “tragedy” for the people of Hong Kong, China and the world.
More:

“We will take action to revoke Hong Kong’s preferential treatment,” he said, adding that the US would also impose sanctions on individuals seen as responsible for smothering Hong Kong’s autonomy.
Trump said he was directing his administration to begin the process of eliminating policy agreements on Hong Kong, ranging from extradition treatment to export controls.
He said he would also issue a proclamation on Friday to better safeguard vital university research by suspending the entry of foreign nationals from China identified as potential security risks – a move believed to be aimed at Chinese graduate students studying in the US.
The moves come after China forged ahead with plans to impose new national security legislation and after US Secretary of State Mike Pompeo said the territory no longer warrants special treatment under US law that has enabled it to remain a global financial centre.

Earlier on Friday, representatives from the US and the United Kingdom raised concerns about China’s Hong Kong plans at the United Nations Security Council, prompting protests from both China and Russia.
The 15-member council informally discussed Hong Kong in a closed virtual meeting after China opposed a US call on Wednesday for a formal open council meeting, arguing that it was not an issue of international peace and security.
US Ambassador to the UN Kelly Craft asked: “Are we going to take the honourable stand to defend the human rights and the dignified way of life that millions of Hong Kong citizens have enjoyed and deserve … or are we going to allow the Chinese Communist Party to violate international law and force its will on the people of Hong Kong?”
“This legislation risks curtailing the freedoms that China has undertaken to uphold as a matter of international law,” the UK’s acting UN Ambassador, Jonathan Allen, said after the council discussion. “We are also extremely concerned that … it will exacerbate the existing deep divisions in Hong Kong.”

Diplomats said Russia and China responded during the council discussion by criticising the US over the Minneapolis killing of an unarmed black man – who was seen on video gasping for breath while a white police officer knelt on his neck – and its handling of growing unrest.
“Why US denies China’s right to restore peace & order in Hong Kong while brutally dispersing crowds at home?” Russia’s Deputy UN Ambassador Dmitry Polyanskiy posted on Twitter after the council discussion.
China’s UN Ambassador Zhang Jun said in a statement after the meeting that the US and UK should “mind their own business,” adding that: “Any attempt to use Hong Kong to interfere in China’s internal matters is doomed to fail.”
Continue Reading…

United States President Donald Trump has escalated his war on social media companies, signing an executive order on Thursday challenging the liability protections in US law that serve as a bedrock for unfettered speech on the internet. The move followed Twitter’s decision to apply fact checks to two of his tweets about voting.  More: US… 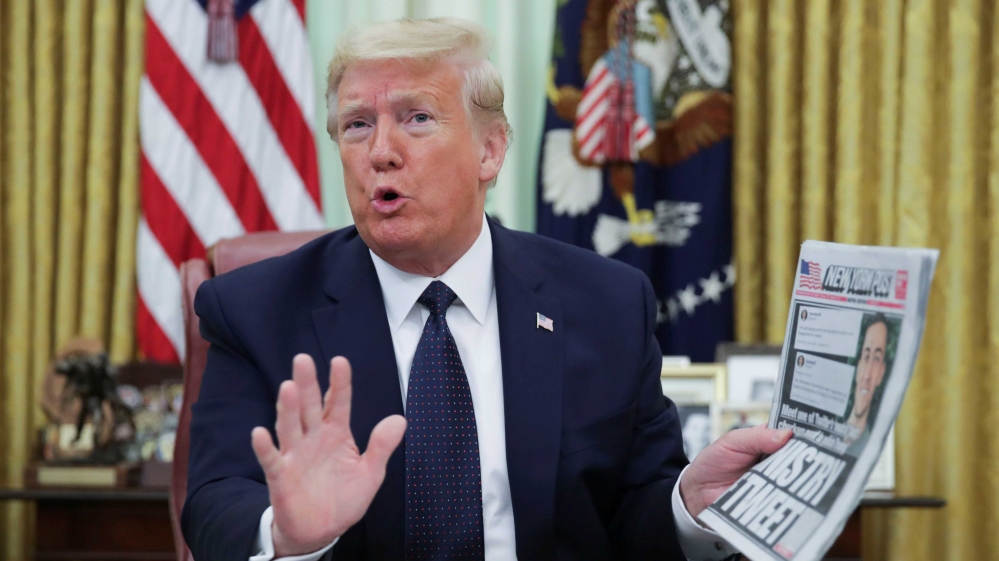 United States President Donald Trump has escalated his war on social media companies, signing an executive order on Thursday challenging the liability protections in US law that serve as a bedrock for unfettered speech on the internet.
The move followed Twitter’s decision to apply fact checks to two of his tweets about voting.
More:

The Conspiracy Virus: COVID-19 misinformation in the US

Trump says he is taking hydroxychloroquine despite FDA warnings

Trump said the fact checks were “editorial decisions” by Twitter and amounted to political activism. He said it should cost those companies their protection from lawsuits for what is posted on their platforms.
Trump and his allies, who rely heavily on Twitter to attack their foes, have long accused the tech giants of targeting conservatives on social media by fact-checking them or removing their posts.
“We’re fed up with it,” Trump said, claiming the order would uphold freedom of speech.
Companies like Twitter and Facebook are granted liability protection under Section 230 of the Communications Decency Act because they are treated as “platforms”, rather than “publishers”, which can face lawsuits over content.
“What I think we can say is that we’e going to regulate it,” Trump said before signing it/
Twitter called the order “a reactionary and politicized approach to a landmark law” and said attempts to weaken Section 230 would “threaten the future of online speech.”
The order directs executive branch agencies to ask independent rule-making agencies including the Federal Communications Commission and the Federal Trade Commission to study whether they can place new regulations on the companies.
Jack Balkin, a constitutional law professor at Yale University said Trump, who is seeking a second term in November, “is seeking to frighten, coerce, scare, cajole social media companies to leave him alone and not do what Twitter has just done to him.”
Experts are doubtful that much could be done without an act of Congress although Trump has said he would push for legislative action as well.
A similar executive order was previously considered by the administration, but shelved over concerns that it could not pass legal muster and that it violated conservative principles on deregulation and free speech.
‘Plainly illegal’
On Wednesday, Twitter CEO Jack Dorsey tweeted, “We’ll continue to point out incorrect or disputed information about elections globally.”
Dorsey added: “This does not make us an ‘arbiter of truth.’ Our intention is to connect the dots of conflicting statements and show the information in dispute so people can judge for themselves.”
On the other hand, Facebook CEO Mark Zuckerberg told Fox News his platform had “a different policy, I think, than Twitter on this.”
“I just believe strongly that Facebook shouldn’t be the arbiter of truth of everything that people say online,” he said.

A reporter takes a smartphone photo of Trump during a news conference at the Hanahan City Hall in Hanahan, South Carolina, the US [File: Richard Ellis/EPA]

The president’s critics, meanwhile, criticised the platforms for allowing him to put forth false or misleading information that could confuse voters.
“Donald Trump’s order is plainly illegal,” said Senator Ron Wyden, a Democrat and advocate for internet freedoms. He is “desperately trying to steal for himself the power of the courts and Congress … all for the ability to spread unfiltered lies.”
Trump’s proposal has multiple, serious legal problems and is unlikely to survive a challenge, according to Matt Schruers, president of the Computer and Communications Industry Association, a Washington, DC-based organisation that represents computer and internet companies.
It would also seem to be an assault on the same online freedom that enabled social media platforms to flourish in the first place – and made them such an effective microphone for Trump and other politicians.
“The irony that is lost here is that if these protections were to go away, social media services would be far more aggressive in moderating content and terminating accounts,” Schruers said.
Continue Reading… 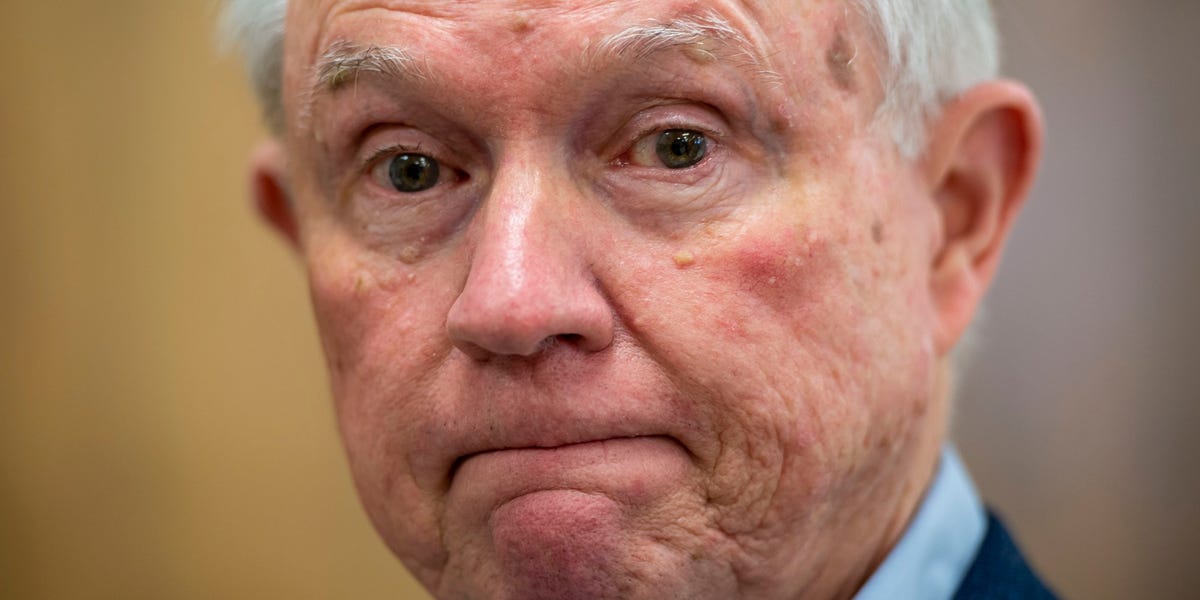 President Donald Trump continued a roughly 24-hour-long Twitter spat with his former attorney general, Jeff Sessions, accusing him of having “ruined many lives” due to his decision to recuse himself from the Russia investigation.

“Jeff, you had your chance & you blew it. Recused yourself ON DAY ONE (you never told me of a problem), and ran for the hills. You had no courage, & ruined many lives,” Trump tweeted Saturday evening. “The dirty cops, & others, got caught by bigger & stronger people than you. Hopefully this slime will pay a big… price.”

He continued: “You should drop out of the race & pray that super liberal [Sen. Doug Jones] … gets beaten badly.”

One day earlier, Sessions had lashed out at Trump in a tweet after Trump urged Alabama voters, “Do not trust Jeff Sessions.”

“Look, I know your anger, but recusal was required by law. I did my duty & you’re damn fortunate I did,” Sessions tweeted Friday night, in response to one of Trump’s tweets. “It protected the rule of law & resulted in your exoneration. Your personal feelings don’t dictate who Alabama picks as their senator, the people of Alabama do.”

Trump has long complained about Sessions and his decision to recuse himself — even bashing him publicly while Sessions was still the attorney general.

Trump ousted Sessions in November 2018, but Sessions has continued to praise Trump’s agenda, and has campaigned on a platform of supporting him.

The primary runoff between Sessions and Tuberville was initially scheduled for March, but has been delayed until July due to the coronavirus.