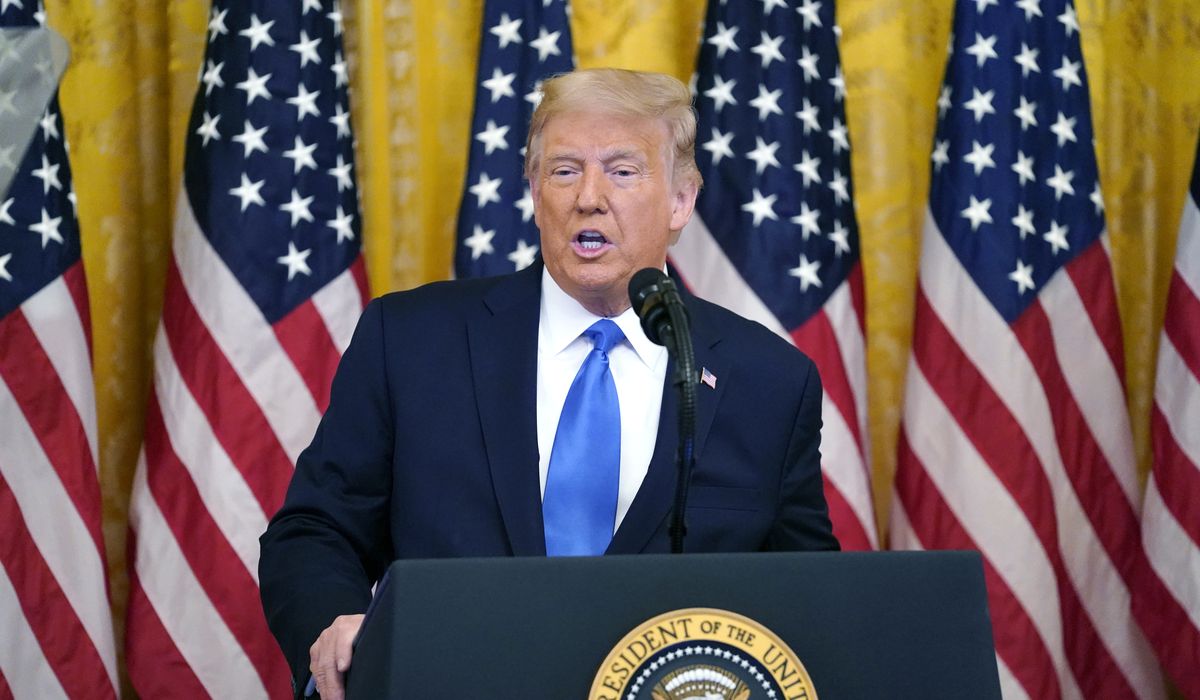 President Trump announced tough new sanctions against Cuba’s tourism industry Wednesday and honored veterans of the 1961 Bay of Pigs invasion of Cuba at the White House, as he aggressively courts Hispanic voters in Florida by rolling back the Obama administration’s outreach to the communist nation.

The president said U.S. travelers to Cuba won’t be allowed to bring back rum or cigars as souvenirs, effective Thursday. The administration also is barring Americans from staying at more than 400 hotels and rental properties owned by the Cuban government — nearly all the hotels in Cuba.

“These actions will ensure that U.S. dollars do not fund the Cuban regime and go directly to the Cuban people,” Mr. Trump said during an East Room ceremony honoring 23 veterans of the failed 1961 invasion. “We will not lift sanctions until all political prisoners are freed, freedoms of assembly and expression are respected, all political parties are legalized and free elections are scheduled.”

The president is pushing hard to increase his support among Hispanic voters, including Cuban Americans, about two-thirds of whom live in Florida. He also has placed a Cuban American judge from Florida, Barbara Lagoa of the 11th U.S. Circuit Court of Appeals, on his short list of candidates for a Supreme Court nomination that he is scheduled to announce Saturday.

Mr. Trump will hold a campaign rally Thursday night in Jacksonville, Florida, followed by a roundtable Friday with Hispanic supporters in the Miami area, as he gains in polls with the crucial voting bloc.

“The big story is the poll numbers: ‘Trump has gone through the roof with the poll numbers from Hispanics,’” Mr. Trump told the Cuban Americans. “They’re all talking about it. I guess they didn’t know I love you, but I do. But they’re all shocked.”

The 433 banned hotel and rental properties owned by the Cuban government or linked to government officials will be named in a list published by the State Department. Travel and tourism companies subject to U.S. laws will be barred from making reservations at the properties.

“The Cuban government’s profits from properties in the hospitality industry owned or controlled by the Cuban government … all at the expense of the Cuban people, who continue to face repression at the hands of the regime,” Secretary of State Mike Pompeo said in a statement. “Authorized travelers should instead stay in private accommodations, or ‘casas particulares,’ owned and operated by legitimately independent entrepreneurs.”

The Treasury Department also is restricting participation in conferences and sporting events in Cuba. Anyone subject to U.S. law must apply for specific authorization to take part in such activities.

Mr. Trump has been imposing sanctions on Cuba since the start of his presidency and accuses the Castro regime of repression and of aiding the government of socialist Nicolas Maduro in Venezuela. The administration has suspended flights to Cuba, except for Havana, limited family remittances from the U.S. and sanctioned shipments of Venezuelan oil.

Mr. Trump said of a liberated Cuba, Venezuela and Nicaragua, “You will have that very soon. A lot of things are going on right now that I can’t tell you about.”

The president’s efforts in Florida took a hit this week when the Miami Herald reported that he applied in 2008 to register his Trump trademark in Cuba for commercial activities, including investments in real estate, hotels, casinos and golf courses. The application was approved in 2010 and expired in 2018, after he took the Oval Office.

“American citizens are already banned from traveling to Cuba because of the coronavirus, and Trump has privately sought to do business with the country for years and ignored the embargo,” Mr. Gutierrez said. “He’s filed trademarks with the Cuban government to make money on golf courses, hotels and more, but now that he’s lagging in the polls, he’s just using our foreign policy for his own political gain.”

Mr. Trump criticized former President Barack Obama and Mr. Biden for making “a weak, pathetic, one-sided deal with the Castro dictatorship that betrayed the Cuban people and enriched the communist regime.” The 2015 agreement restored diplomatic and some economic ties with the U.S.

“I canceled the Obama-Biden sellout to the Castro regime,” Mr. Trump said. “Today, we reaffirm our ironclad solidarity with the Cuban People, and our eternal conviction that freedom will prevail over the sinister forces of communism. My administration stands with every citizen of Cuba, Nicaragua and Venezuela in their fight for liberty.”

Mr. Trump, noting that September is Hispanic Heritage Month, said Hispanic Americans “uplift and inspire our nation. They’ve been so good to me.”

The veterans of Brigade 2506 endorsed Mr. Trump, following up on their endorsement of four years ago. Veteran Humberto Cortina praised the president’s policies.

“As a father and grandfather, I appreciate your leadership, Mr. President, and your vision for the future. And I look forward to your presidency for the next four years,” he said.

The Bay of Pigs invasion was a failed landing operation on the Cuban coast by Cuban exiles who opposed Fidel Castro. Backed by the CIA, the operation was planned during the Eisenhower administration and was launched from Nicaragua and Guatemala in the early days of President Kennedy’s administration.

More than 1,200 members of Brigade 2506 were captured and held prisoner in Cuba, and more than 100 were killed in the operation. The U.S. secured the release of nearly all prisoners after 20 months, and the last gained his freedom in 1986.

“Your bravery inspires us all,” the president told the surviving veterans.

“The veterans we honor today are a powerful testament to all that a free people can achieve,” Mr. Trump said. “In the past six decades, you have built strong families, thriving businesses and vibrant communities.”

He said the “courageous veterans here today bear witness to how socialism, radical mobs and violent communists ruin a nation.”

Pointing to civil unrest in the U.S., Mr. Trump said, “Now, the Democrat Party is unleashing socialist mobs on America. Today, we proclaim that America will never be a socialist country.”