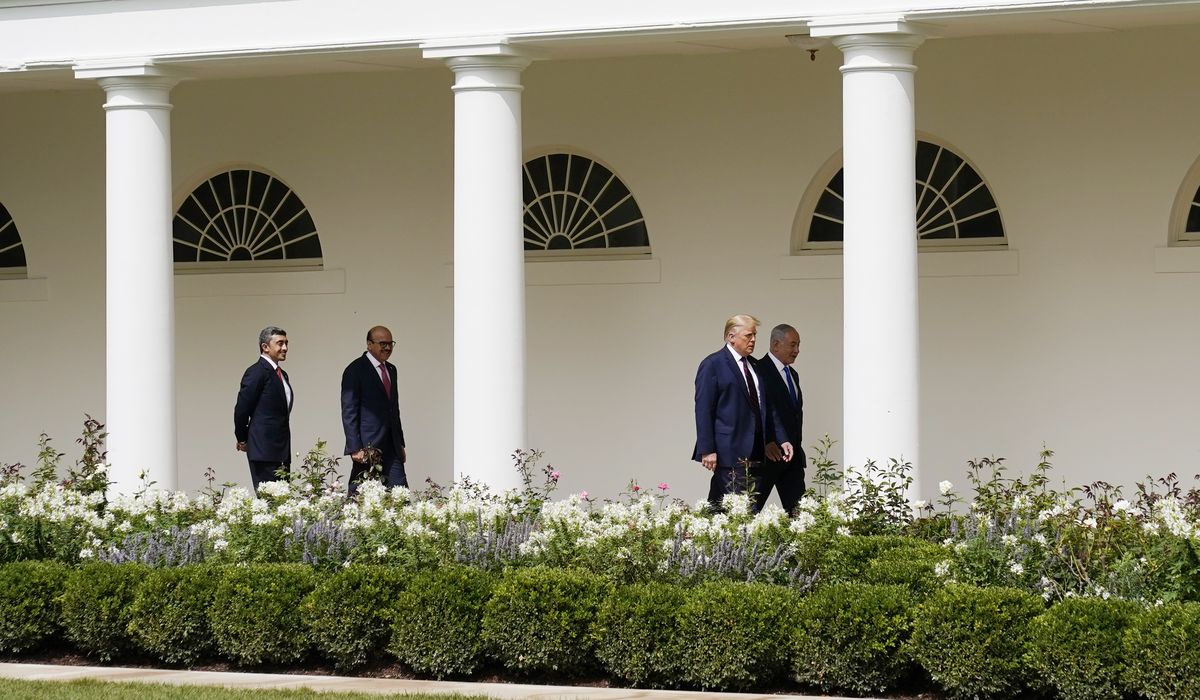 President Trump’s fresh approach to one of the world’s most intractable and dangerous problems, the Palestinian-Israeli conflict, culminated Tuesday in the signing of historic agreements with Israel, the United Arab Emirates and Bahrain to normalize their diplomatic relations.

The move also burnished Mr. Trump’s credentials as a statesman and a peacemaker less than two months before he faces voters for reelection.

In a ceremony on the South Lawn at the White House, the president said the breakthrough cooperation between Israel and the two moderate Arab, Muslim states is a major step toward ending war in the Middle East.

“We’re here this afternoon to change the course of history,” Mr. Trump said. “After decades of division and conflict, we mark the dawn of a new Middle East.”

Under the agreement, the first of its kind in more than a generation, the three countries agreed to exchange embassies and ambassadors. They will cooperate on a broad range of trade, education and health care issues.

Israel also agreed to suspend its annexation of territory in the West Bank for an undisclosed period.

Shortly after the ink dried in Washington, Palestinians in the Gaza Strip fired two rockets into Israel, injuring at least six people. Israeli forces reportedly intercepted one of the rockets with its Iron Dome defense system.

By compelling Gulf states to recognize Israel instead of waiting for the Palestinians to gain their own state, U.S. officials say the agreement will put pressure on the Palestinian Authority to return to negotiations. Mr. Trump said other Gulf states soon will join the agreement, known as the “Abraham Accords” in reference to the common traditions of Islam, Judaism and Christianity. He predicted Saudi Arabia will come into the fold soon.

“Thanks to the great courage of the leaders of these three countries, we take a major stride toward a future in which people of all faiths and backgrounds live together in peace and prosperity,” Mr. Trump said, flanked by the three other leaders on the iconic Truman Balcony.

“This day is a pivot of history,” Mr. Netanyahu said. “It heralds a new dawn of peace. This peace will eventually expand to include other Arab states. And ultimately, it can end the Arab-Israeli conflict once and for all.”

The UAE’s foreign minister, Abdullah bin Zayed Al Nahyan, said of the development, “We are witnessing a change in the heart of the Middle East, a change that will send hope around the world.”

Bahrain’s foreign minister, Abdullatif bin Rashid Al-Zayani, called the agreement an “historic step on the road to genuine and lasting peace” but cautioned that hard work still lies ahead.

“It is now incumbent on us to work urgently and actively to bring about a lasting peace and security,” he said. “Our people deserve a just and comprehensive and enduring two-state solution to the Palestinian-Israeli conflict, which is the foundation, the bedrock of such peace.”

Merissa Khurma, Middle East program manager at the Wilson Center in Washington, said the agreements mark “a new and important shift in the region’s geopolitics.”

“Arab-Israeli peace is no longer conditional on resolving the Palestinian-Israeli conflict and addressing the issue of Palestinian statehood, which has defined regional relations for decades,” she said.

Ms. Khurma said economic and military cooperation with Israel by the UAE and Bahrain, which are adversaries of Iran, “will shift the political and security dynamics in the region, particularly vis a vis Iran.”

Jim Phillips, a Middle East specialist at the Heritage Foundation, said the agreements could lead to a broader Arab-Israeli peace agreement including Saudi Arabia, Oman, Morocco and Sudan.

“It is a vindication of the Trump administration’s ‘outside-in’ negotiating strategy, which focused on pragmatic Arab states on the periphery while trying to coax the Palestinian Authority back into negotiations with Israel,” Mr. Phillips told The Washington Times. “For Israel, Bahrain and the UAE, it clears the way for trade, investment, technological cooperation, tourism, and most importantly, strategic cooperation against Iran, regarded by all three and the U.S. as the chief threat to regional stability.

“Iran’s hostility brought Israel, Bahrain and the UAE closer together, and Iran stands to be the biggest loser due to enhanced Arab-Israeli ties.”

Secretary of State Mike Pompeo, speaking at a virtual event hosted by the Atlantic Council, said the administration’s approach flipped a decades-old script in Washington that had given Palestinians a “veto right” over any Middle East negotiations.

“We laid out a vision for peace that had another element — that was the deep recognition that the primary destabilizing force in the Middle East was not the conflict between Israel and the Palestinians, but was rather the threat posed by the extraterritorial ambitions of the clerical regime in Iran,” Mr. Pompeo said. “We flipped what the previous administration was doing on its head.”

A wrinkle in the negotiations was the UAE’s interest in buying F-35 fighter jets from the U.S., a move opposed by Israel. Mr. Trump said he’ll “work it out,” noting that the UAE has fought on the side of the U.S. in four wars.

During his visit, Mr. Netanyahu also pressed the White House for $8 billion more in military aid, including more F-35s.

When Mr. Trump took office nearly four years ago, Democrats predicted he would be a warmonger. Last week, he was nominated for the Nobel Peace Prize as a result of the Middle East agreements.

The president, who pulled the U.S. out of the Obama administration’s nuclear deal with Iran, said Tehran would receive more favorable treatment from Democratic nominee Joseph R. Biden if he wins the presidency.

“I’m going to make a good deal with Iran,” he told reporters. “But I think they should wait until after the election. Because a dream for those countries would be ‘Sleepy Joe.’”

The White House invited some congressional Democrats to the ceremony, and House Foreign Affairs Committee Chairman Eliot L. Engel of New York was among those who attended. House Armed Services Chairman Adam Smith, Washington Democrat, called the agreements a “diplomatic breakthrough [that] represents a positive step that will bolster regional stability.” But he said peace in the Middle East “will only be attainable if Israeli-Palestinian negotiations restart in earnest, so as to preserve a two-state solution.”

House Speaker Nancy Pelosi dismissed the event as “a distraction” organized by Mr. Trump to divert voters’ attention from the COVID-19 pandemic.

Republican Sen. Mitt Romney of Utah, who has criticized the administration’s foreign policy repeatedly, praised the president and his advisers for their “hard-won efforts.”

“Forging new partnerships between our friends in the Middle East is critical to countering the region’s malign actors such as Iran and is in the best interest of U.S. national security,” Mr. Romney said.

“It’s not something that my critics thought was possible.”

Before the signing, the president hosted each of the leaders separately in the Oval Office. He gave a symbolic key to the White House to Mr. Netanyahu, calling it “the big day.”

“Even Bibi gets tired of war,” he joked.

Mr. Netanyahu told the president, “You have the key to the hearts of the people of Israel.”