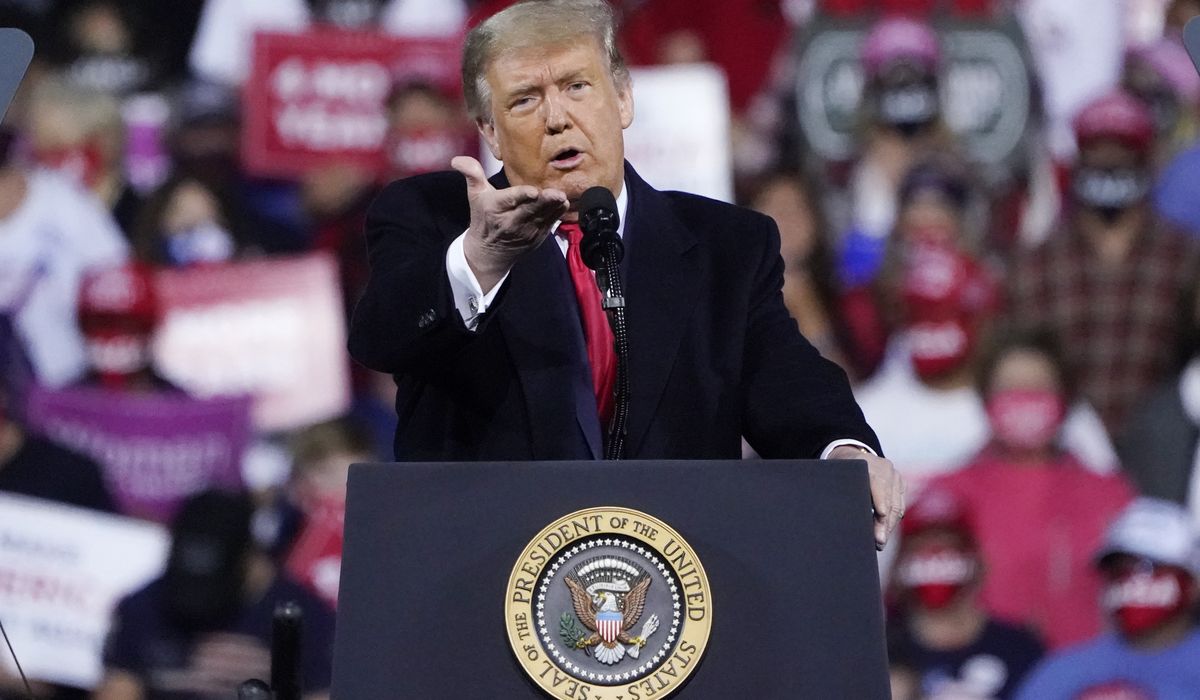 President Trump said Saturday it cannot be “more clear” that he’s empowered to fill the vacant Supreme Court seat left by the death of Justice Ruth Bader Ginsburg and that his pick will be a woman, beaming as a North Carolina crowd chanted, “Fill that seat!”

“It will be a woman — a very talented, very brilliant woman,” he said.

Mr. Trump said he’s got a constitutional right to ensure the high court has a full complement of justices, as the Senate gears up for a nasty fight over filling a vacancy so close to Election Day.

Mr. Trump soaked in his right to name a third justice in his first term after paying homage to Justice Ginsburg, who died late Friday of pancreatic cancer. He extolled her record of delivering landmark rulings and her “devoted to justice.”

“You may agree, you may not agree with her, but she was a tremendous inspiration to all Americans,” Mr. Trump said.

The president highlighted Justice Ginsburg’s well-documented friendship with late Justice Antonin Scalia, a conservative who was popular with his base.

“Our thoughts and prayers are with her family, thank you very much,” he said.

The crowd responded with respectful silence before erupting in vocal support for Mr. Trump’s push to fulfill his “moral” responsibility and fill the seat

“We have plenty of time, there’s a lot of time. You’re talking about January 20th, right?” he said.

Mr. Trump is rallying in swing states on an almost-daily basis, as polls show him trailing to former Vice President Joseph R. Biden, the Democratic nominee.

North Carolina’s 15 electoral votes will be a key prize on Nov. 3.

Mr. Trump won the state by over 3 percentage points in 2016 but it appears to be a tighter race this year, with Mr. Biden leading by less than 1 point in Real Clear Politics’ average of polls.

The president isn’t suffering from a lack of confidence.

“If I lose to him, I don’t know what I’m going to do. I will never speak to you again. You’ll never say no. How do you lose?” he told supporters Saturday.

Justice Ginsburg had been ill for some time, but her death sent shockwaves through Washington and 2020 races to determine who controls the White House and Congress — the Senate, in particular.

“It does change the focus, without a doubt,” Mr. Trump’s chief of staff, Mark Meadows, told reporters on the flight into North Carolina.

The president covered other topics nonetheless, from his insistence the country is “turning the corner” on the coronavirus pandemic to lambasting Hunter Biden, the former vice president’s son, who’s had done business in Ukraine and China.

He also complained about the media, saying they failed to cover his twin nominations for the Nobel Peace Prize by Scandinavian lawmakers.

“I got the Nobel Peace Prize nomination, a peace-prize Nobel nomination and they didn’t cover it,” he said.

Mr. Trump said “Fill the seat” should be emblazoned on a T-shirt and polled the crowd on whether they want a woman to sit on the court or not. The “man” option received tepid cheers compared to raucous cheers for the female option.

Mr. Trump also gave a shout-out to Sen. Thom Tillis of North Carolina, one of several vulnerable Senate Republicans in this cycle.

His Democratic challenger, Cal Cunningham, is leading by the low-single digits in most polls.