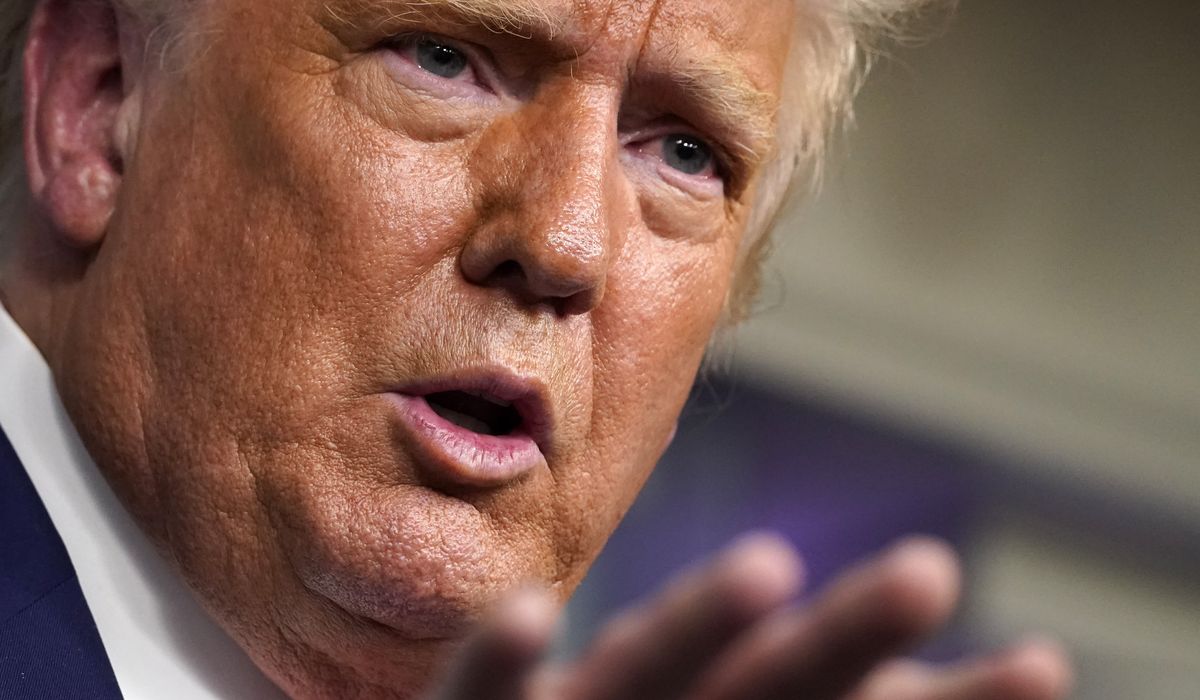 President Trump on Wednesday said the government is poised to begin distributing a coronavirus vaccine as soon as next month, potentially giving the country and his reelection campaign a shot in the arm.

The administration said as many as 700 million doses could be dispensed by the end of March.

“We’re very close to that vaccine as you know and I think much closer than I think most people want to say,” Mr. Trump said at a White House press conference, bucking some members of his health team, who are less optimistic.

But Democratic presidential nominee Joseph R. Biden had a vaccine briefing Wednesday in Delaware, and while he took pains to differentiate his distaste for Mr. Trump from the medical efforts, he came out of it saying he doesn’t trust Mr. Trump to play it straight.

“Let me be clear. I trust vaccines, I trust scientists, but I don’t trust Donald Trump. At this moment, the American people can’t either,” Mr. Biden said in a speech from Wilmington, Delaware.

Increasingly, campaign politics infects the chase for a vaccine and every other aspect of the fight against the coronavirus pandemic.

The Trump campaign accused the former vice president and his running mate, Sen. Kamala Harris of California, of endangering lives with rhetoric that echoes “anti-vaxxers.”

Mr. Trump said from the White House that Mr. Biden is promoting “anti-vaccine theories” and that he’s hoping to deliver the first doses of a vaccine before Election Day.

“We think we can start sometime in October,” Mr. Trump said. “That will be from mid-October on. It may be a little later than that.”

While the candidates traded jabs, the Trump administration started to roll out its priorities for the staged rollout of the vaccine. Officials said they plan to dispatch some doses to distribution sites within 24 hours of approval, and that Americans will not “pay a dime” for the shots.

However, the chief of the Centers for Disease Control and Prevention told Congress that distributing enough doses to regain a sense of normal will take until mid-2021.

“I think there will be vaccine that initially will be available some time between November and December, but very limited supply and will have to be prioritized,” Dr. Robert Redfield, the CDC director, told members of the Senate Appropriations Committee. “If you’re asking me ‘When is it going to be generally available to the American public, so we can begin to take advantage of vaccine to get back to our regular life?’ I think we’re probably looking at late second-quarter, third quarter 2021.”

Mr. Biden echoed Dr. Redfield’s words in his speech, saying a vaccine would offer a path to normalcy but “once we have it, we’re going to take months to distribute it.”

Dr. Redfield stressed that persons with the highest need would get the shots sooner than mid-2021, though Mr. Trump wasn’t happy, claiming the CDC director misspoke.

A top adviser, Scott Atlas, said 700 million doses should be available to Americans by the end of March.

The coronavirus is looming over the presidential race, with polls showing that voters disapprove of the way Mr. Trump has handled COVID-19 but don’t blame him for the virus.

Mr. Biden has leaned into the issue, calling for total transparency in the development and delivery of a vaccine.

Following a briefing from experts, Mr. Biden said the White House must spell out the criteria it is using to prove the safety of the vaccine and to have scientists validate those findings. He also said the administration must share how it plans to deliver the vaccine fairly and equitably.

Mr. Biden said as president, he would implement a distribution plan that includes a detailed timetable for when people can get the vaccine and instructions for how the shots should be shipped and stored.

“I will provide the leadership necessary to carry out that plan,” Mr. Biden said. “I will level with the American people. I will take responsibility and I will support rather than tear down the experts responsible for the day-to-day execution of that plan.”

Mr. Trump said a plan isn’t needed because he released one that very morning.

“It’s all set, we have our military lined up,” Mr. Trump said.

The “strategic distribution overview” says the federal government will work with state and local partners to promote the vaccine to the public and ensure they are transported safely through their contractor, McKesson Corp.

The administration said it is working to make sure no American pays out-of-pocket to get the vaccine, though health providers will be reimbursed for their work by private insurers or government programs.

The goal is to vaccinate the American public to achieve a level of herd immunity “where there is no longer sustained transmission of this virus,” said Dr. Redfield.

Once a vaccine is available, officials plan to distribute the first doses to health-care workers who may be exposed to infected patients and then to essential workers who cannot socially distance on the job, such as food-distribution employees, and teachers and school staff.

As the effort progresses, officials will be tracking supply to make sure regions do not have too little — or too much — of the vaccine compared to demand.

Officials also said they will make sure recipients get the right vaccine at the right time. For instance, vaccines from Pfizer and Moderna are not interchangeable from dose to dose.

A vaccine is considered society’s best chance to regain its footing amid a pandemic that began in Wuhan, China, in December and has killed nearly 1 million people worldwide. With the U.S. death toll likely to eclipse 200,000 by the weekend, the vaccine is increasingly becoming a political football.

Surrogates for the Trump campaign scolded the Biden campaign for casting doubt on the unprecedented effort to produce a vaccine for the newly discovered pathogen.

“That is very dangerous for the health of America,” said Rep. Brad Wenstrup, Ohio Republican and a physician, told reporters on a conference call.

The congressman said the vaccine is being developed safely and people should be “very excited about the progress that has been made.”

Federal and state officials are trying to manage the outbreak while they wait for a vaccine. They’ve pleaded with Americans to maintain social distancing and wear a face covering to keep potentially infectious droplets from traveling in the air.

“I might even go so far as to say that this face mask is more guaranteed to protect me against COVID than when I take a COVID vaccine,” Dr. Redfield told senators, holding up his mask for the dais.

He said the eventual vaccine might only protect 70% of recipients, roughly in the range of what the annual flu vaccine achieves, but there is ample scientific evidence that masks will offer more protection from the droplets that the virus needs to spread.

While Mr. Biden reissued his call for a nationwide mask mandate, Mr. Trump pushed back on his CDC director once again.

“It’s not more effective by any means than a vaccine,” Mr. Trump said. “The mask is not as important as the vaccine.”

Also Wednesday, the White House said it recorded a new infection among a staff member on campus, though it didn’t provide more details.

“It’s not anybody that was near me,” Mr. Trump said.