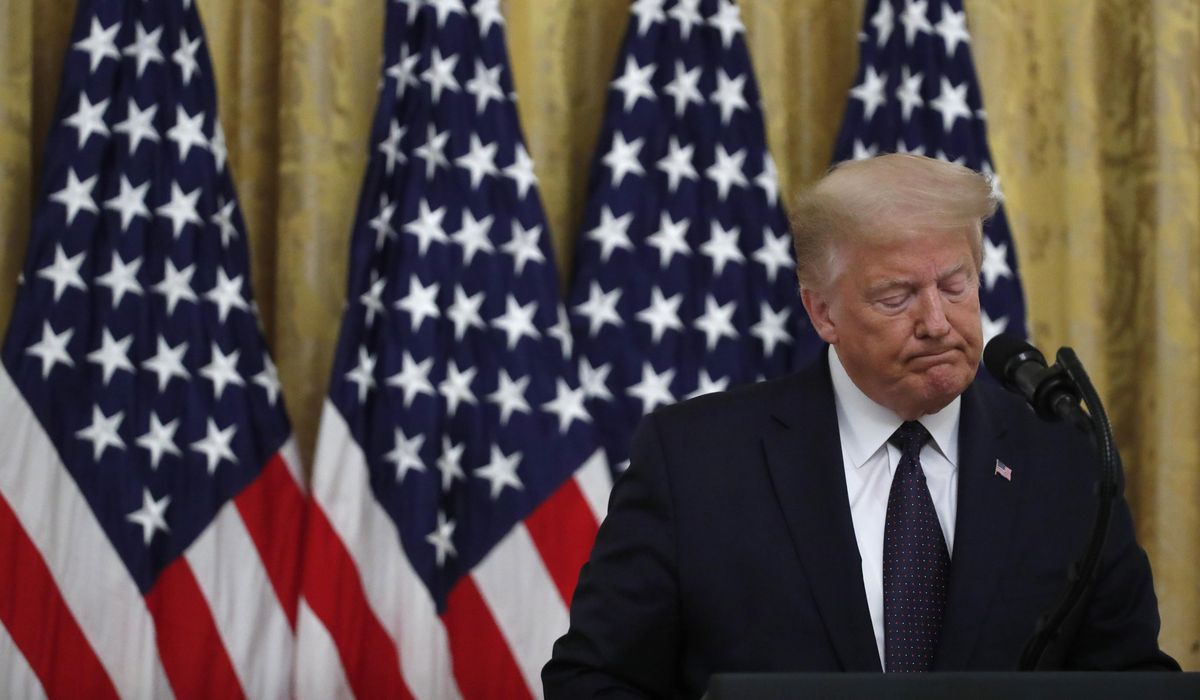 President Trump said Thursday he’ll soon release a new list of conservative potential nominees for the Supreme Court for his second term, a move that he said is “more important than ever” after a string of high-court rulings that have gone against his administration.

He added, “Based on decisions being rendered now, this list is more important than ever before (Second Amendment, Right to Life, [Religious] Liberty, etc.) – VOTE 2020!”

In the 2016 campaign, Mr. Trump released a list of conservative jurists that he promised to use for his high court nominees if elected. The unusual move was credited with winning over many conservatives.

Among the 21 candidates eventually placed on the list were Neil M. Gorsuch and Brett M. Kavanaugh, who are now both of Mr. Trump’s appointees sitting on the Court.

Although conservatives hold a majority on the nine-member Court, several rulings have gone against the president recently. On Thursday, the high court ruled against the administration’s effort to revoke the Obama-era DACA program for young illegal immigrants.

Mr. Trump said of the recent rulings, “Do you get the impression that the Supreme Court doesn’t like me?”

“The recent Supreme Court decisions, not only on DACA, Sanctuary Cities, Census, and others, tell you only one thing, we need NEW JUSTICES of the Supreme Court,” Mr. Trump tweeted. “If the Radical Left Democrats assume power, your Second Amendment, Right to Life, Secure Borders, and Religious Liberty, among many other things, are OVER and GONE!”

He said the rulings against his administration should motivate people to vote for him in November.

“These horrible & politically charged decisions coming out of the Supreme Court are shotgun blasts into the face of people that are proud to call themselves Republicans or Conservatives,” Mr. Trump tweeted. ”=We need more Justices or we will lose our 2nd. Amendment & everything else. Vote Trump 2020!”

President Trump said Friday night that he’ll take imminent executive action to extend federal unemployment benefits, defer payroll taxes and suspend housing evictions after contentious negotiations with congressional Democrats collapsed earlier in the day. “We gave them their chance, but they view it as an election enhancement,” the president said. “We are going to do… 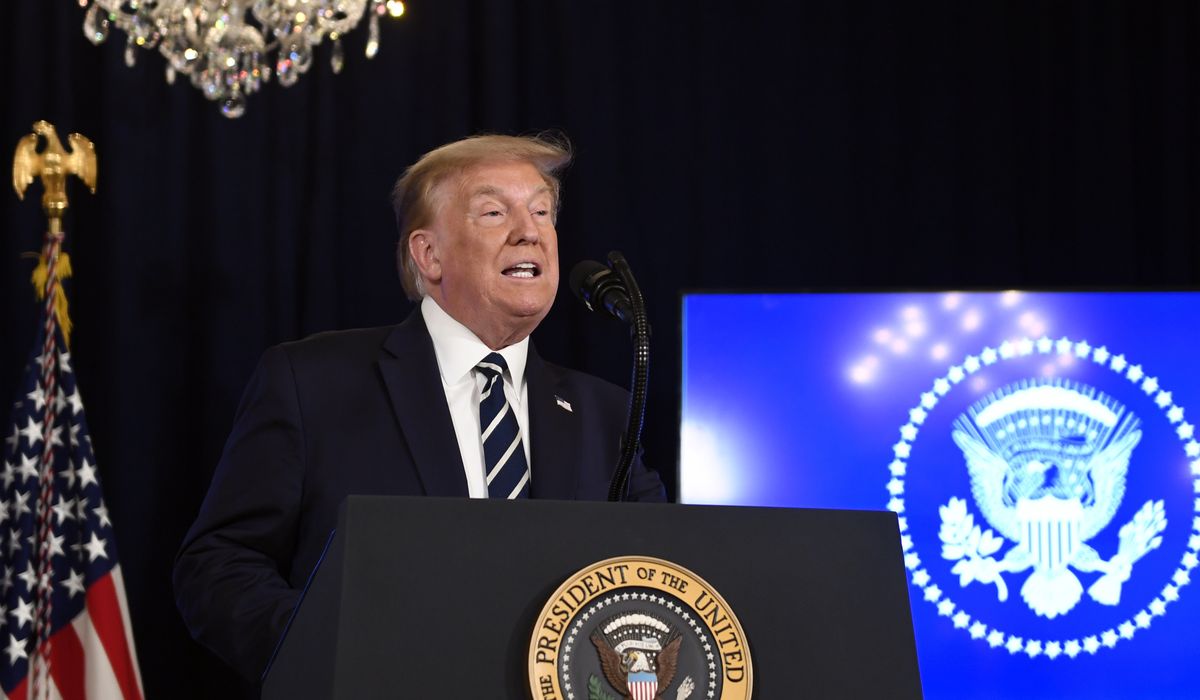 “We gave them their chance, but they view it as an election enhancement,” the president said. “We are going to do it in a way that’s just much easier.”

Speaking at a hastily arranged press conference at his golf club in Bedminster, New Jersey, with a crowd of club members for a cheering section, the president cited the news Friday that employers added 1.8 million jobs in July. He said, “We must ensure that the progress continues.”

As he has for the past week, Mr. Trump said he is ready to take executive action to declare a moratorium on evictions in federally backed housing, suspend student loan payments, extend federal unemployment benefits and defer payroll taxes through the end of the year, retroactive to July 1.

“If Democrats continue to hold this critical relief hostage, I will act under my authority as president to get Americans the relief they need,” Mr. Trump said.

He said he could take the action “by the end of the week.”

Asked about opponents suing to stop him, the president replied, “Probably we get sued. But people feel we can do it. We have the money. We have plenty of money.”

Administration officials say there is about $1 trillion unspent from the $2.2 trillion CARES Act that provided coronavirus relief in March.

White House Chief of Staff Mark Meadows and Treasury Secretary Steven T. Mnuchin said earlier Friday that they would recommend to Mr. Trump that he take the executive actions as soon as this weekend, after another day of talks with congressional Democrats failed to produce a deal.

Mr. Trump said his administration has been negotiating “in good faith to reach an agreement with Democrats in Congress.”

The president said he is ready to defer payroll taxes, which the government imposes on up to 15.3% of wages and self-employment income, split between employees and employers. He also dangled the possibility that it could be extended into the new year, after the November election.

“I can extend it at a certain period. Hopefully, I will be here to do the job,” Mr. Trump said.

His comment about deferring those taxes, for the first time, suggested that workers and employers would be required to repay the taxes to the IRS at some point, although it wasn’t immediately clear.

House Speaker Nancy Pelosi and Senate Minority Leader Charles E. Schumer said Friday that the White House refused to meet them halfway between their demand of $3.4 trillion in coronavirus relief and Senate Republicans‘ proposal of roughly $1 trillion. Democrats are seeking more than $900 million in aid for states and cities as part of their request.

Several times during the president’s frequently partisan remarks, the audience of roughly 100 people at the golf club cheered Mr. Trump and applauded.

When a reporter told the president that there were “dozens of people who are not following the [coronavirus] guidelines in New Jersey,” the crowd booed, and Mr. Trump challenged the journalist.

The crowd cheered and applauded.

“They pretty much all have masks on,” the president told reporters. “I call it peaceful protest, because they heard you were coming up, and they know the news is fake.” 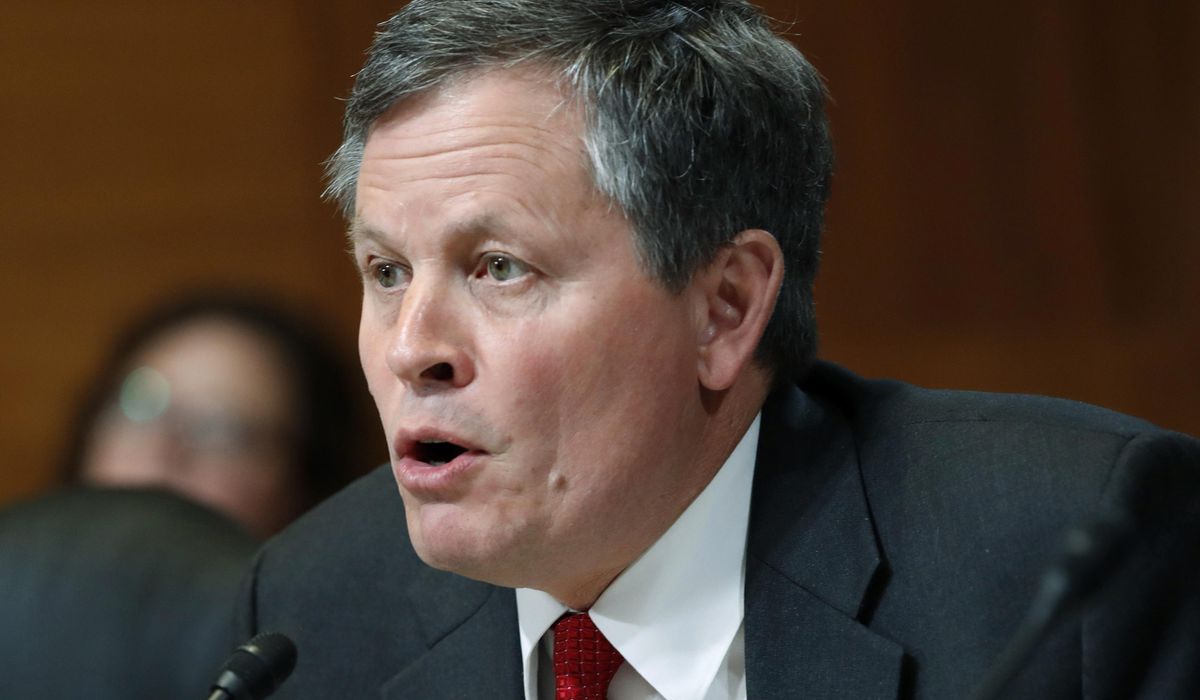 Daines is running against Democratic Gov. Steve Bullock in a key battle that could help determine the majority party in the U.S. Senate.

Daines, writing on Twitter, thanked voters for their support in Tuesday’s primary election and added: “Let’s win this in November!”

Trump responded with: “No contest. Steve blows him away. So important for Montana. I’ll be there to help Steve win big!!!”

Daines responded: “Montana can’t wait to have you back, Mr. President!”

No dates have been announced. Montana’s current coronavirus-related directives include a restriction on groups of more than 50 in which social distancing cannot be maintained.

The president acknowledged at his fourth rally that his interest in the Senate race stemmed from anger at Tester, whom he blamed for the withdrawal of his first nominee to head the U.S. Department of Veterans Affairs, White House physician Ronny Jackson.