In one message shared by the president, John Stahl, a conservative who gathered only 3% of the vote in his bid for election to California’s 52nd House district in 2012, called former Democratic presidential candidate Hillary Clinton a “skank.”

Like Trump, Stahl is fond of referring to political opponents with insulting nicknames, a review of his Twitter feed reveals.

In another messages shared by Trump, Stahl aimed insulting jibes at House Speaker Nancy Pelosi and Stacey Abrams, who narrowly lost the mid-term race for the governor’s office in Georgia, and is a leading contender to be nominated Joe Biden’s running mate on the Democratic presidential ticket.

Pelosi last week referred to Trump as “morbidly obese” after he admitted to taking hydroxychloroquine, to ward off the coronavirus, which has been shown to cause heart problems.

But some critics have warned that Democratic leaders should not stoop to the name-calling that Trump has long indulged in, amid debate on how best to counter the president’s insults and personal attacks.

With Trump under increasing pressure for his administration’s faltering response to the coronavirus pandemic — which has now killed more than 100,000 Americans — he has doubled down on the personal insults, smears and conspiracy theories about opponents that distinguished his 2016 campaign.

The president has a long record of making demeaning and sexist comments about women, and his presidential candidacy featured the release of the infamous Access Hollywood tapes in 2016, where he boasted of groping women.

But some observers have noted that the president’s incendiary comments and provocations are now getting significantly less attention than they once attracted, as America battles its worst public health crisis in decades.

The president in response to allegations of sexism has pointed to his record of promoting women to senior positions in his administration and businesses.

Some analysts believe that Trump’s use of divisive rhetoric could cost him votes from women in November’s election.

Polls have consistently shown a huge gender gap in how men and women view Trump, with a Gallup survey in March finding that while 49% of men approve of Trump, only 36% of women do.

And recent surveys show his support among one of the key demographics who helped propel him to victory in 2016, white working-class women, may be slipping. Many view him as impulsive and divisive, according to a report by McClatchy last November.

Republican advisers have warned the president that his low standing am0ng white suburban women has gotten worse during the coronavirus crisis, and presents a significant problem for his chances of reelection, reported theDaily Beast in April.

As coronavirus spreads, few leads but many theories on origin

Hong Kong, China – The blame game between China and the United States on the origin of the coronavirus pandemic has fuelled a host of theories, some more believable than others.  At the start of the outbreak in December, the most mainstream assumption was that the virus originated from a so-called wet market in Wuhan,… 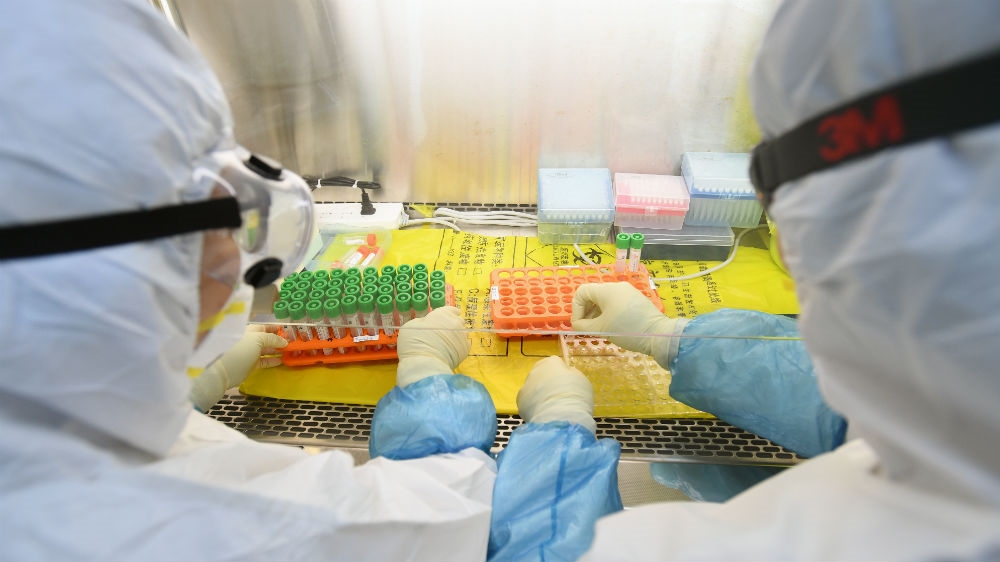 Hong Kong, China – The blame game between China and the United States on the origin of the coronavirus pandemic has fuelled a host of theories, some more believable than others.
At the start of the outbreak in December, the most mainstream assumption was that the virus originated from a so-called wet market in Wuhan, the Chinese city where the first COVID-19 cases were reported.
More:

US, China spar over coronavirus origin

China in coronavirus propaganda push as ties with US worsen

But as the virus spread globally, the role of public-health laboratories in Wuhan came under increasing scrutiny.
In two labs in Wuhan, long-running experiments with bat viruses helped scientists quickly identify the coronavirus as most likely to have come from the nocturnal mammal, but those same labs have also fuelled biosafety concerns.
The practice of collecting viruses from bats first burst into public view in the early weeks of the outbreak when Shi Zhengli, a noted scientist with the Wuhan Institute of Virology, refuted a swirl of online accusations both at home and abroad that the coronavirus may have leaked from her institute, where a lab certified as BSL-4, the highest level for handling dangerous pathogens, opened three years ago.
Director-Generalof the World Health Organization Tedros Adhanom Ghebreyesu has called such speculation part of an “infodemic” of fake news surrounding the coronavirus, while other public health officials said they belong with the slew of conspiracy theories claiming that the virus was engineered (all scientists who have studied the genome of the virus agree that would be impossible).
But some scientists, both within China and elsewhere, say an accidental leak remains a possibility – insofar as there is no evidence to disprove it.
“There is nothing ‘fake’ about lab accidents,” said Richard Ebright, a molecular biologist and director at the Waksman Institute of Microbiology at Rutgers University in New Jersey, US. “There also is nothing ‘conspiratorial’ about lab accidents.”

Experts from the World Health Organization (WHO) and Chinese joint team visited Wuhan, the city where the new coronavirus purportedly originated, in February when the outbreak there was at its peak [File: China Daily via Reuters]

Bat research
In China, research on bat viruses began in earnest shortly after the SARS epidemic subsided.
The 2003 outbreak, which originated in the southern province of Guangdong, proved particularly deadly in parts of Asia. Of the more than 8,000 people infected, 84 percent of the fatal cases were in China. The virus was later traced to a palm civet that had been infected by a bat.
Bats are most prevalent in the caves in Yunnan province in China’s southwestern borderland.
So, over the past 10 years, Shi and other Wuhan virologists have made numerous expeditions to collect viruses from different bat species, building up Asia’s largest virus bank, according to the institute’s newsletter.
“Through their work on bats, they’ve found a huge diversity of SARS-like virus in bats and flagged some of these viruses that may have an impact on human health,” said Leo Poon, a virologist at the University of Hong Kong who co-authored a paper with Shi in 2010.
Poon said once the genome of the coronavirus was sequenced in early January, Shi was able to confirm its likely source as a bat by retrieving a bat virus sample from her store that was 96 percent similar.

Some scientists have suggested the pangolin, the world’s most trafficked mammal, could have been an intermediary for the coronavirus; the animals are smuggled from countries like Malaysia for their scales and meat [File: Bazuki Muhammad BM/JS/Reuters]

To raise its research profile, the Wuhan institute had sought out foreign expertise in establishing China’s first BSL-4 lab.
Working with the Jean Merieux BSL-4 Laboratory in Lyon, France, the institute had the3,000 square metres (32,292 square feet) lab certified by both Chinese and French authorities for operations by early 2017.
Staff went through extensive training in France, Canada, and the United States, as well as in-house, according to the WHO. There is no worldwide body overseeing such facilities, although the WHO publishes a Laboratory Biosafety Manual and its guidelines widely followed.
In a report published after a December 2017 consultative meeting on high and maximum containment labs, Dr Kasunobu Kojima, the WHO’s focal point for biosafety and laboratory security who was in the process of updating the manual noted: “Risk does not arise from the pathogen alone, but results from the process.”
Shi did not respond to Al Jazeera’s request for an interview, but told Scientific America that the coronavirus did not match “any of those of the viruses her team had sampled from bat caves”.
Accidents can happen
The BSL-4 lab was not the only laboratory in the city of 11 million people that was collecting bat viruses.
In mid-February, scientists from two of China’s most prestigious polytechnics, including one in Wuhan, circulated a pre-print paper, one that has not undergone peer review, detailing accidents involving bats at the lab of the Wuhan Center for Disease Control and Prevention (CDC). After being attacked and urinated on by the bats, a researcher quarantined himself for 14 days.
The CDC lab is located280 metres (919 feet) from the seafood market and across the street from the hospital that were the sites of the earliest clusters of COVID-19 cases. The authors made a circumstantial case for the virus “probably originate[ing] from a laboratory in Wuhan”.
As long as no scientist has been able to marshal the evidence to the contrary, to Ebright this remains a possible scenario.

He points out that after the initial outbreak, SARS virus leaked from labs in Singapore and Taipei, as well as twice in Beijing.
And last December, a leak of the bacterium Brucella from a veterinary lab in Gansu province infected more than 100 people.
SARS and other coronaviruses are not considered airborne or lethal so experiments on them are allowed in laboratories of a lower safety level, where full-bodysuits and complete decontamination for lab technicians are not necessarily required. Anyone handling the virus could become an unwitting carrier.
Scientists who are sceptical of the lab leak hypothesis believe there was probably an intermediate host for the virus before it made the leap to humans, as there was during the 2003 SARS outbreak.
COVID-19 coronavirus bears such a close resemblance to the SARS coronavirus that it was officially termed SARS-CoV-2.
Yet, Shi and her American collaborators have shown that in a laboratory environment bat coronaviruses can jump directly to humans.
Market cleared, disinfected
Even as the lockdown in Wuhan and the surrounding Hubei province has been eased in recent days, the search for the intermediary host is likely to prove challenging.
The wild animals that were believed to be on sale illegally at the seafood market – which the scientists see as specimens – were destroyed after it was shut down in early January soon after the first known cluster of cases emerged there. The whole area has been disinfected and scrubbed.
A peer-reviewed paper published in Nature in late March said Chinese scientists had discovered coronavirus genomes that were 85.5 to 92.4 percent similar to SARS-CoV-2 in wild pangolins smuggled to China from Malaysia in 2017. The similarity suggests a pangolin as a likely intermediary but is not close enough for any definitive conclusion to be drawn.
With the US now the new epicentre of COVID-19, American and Chinese officials in recent weeks have ratcheted up their rhetoric on which country is to blame for the outbreak, re-kindling the controversy over the source of the coronavirus.

Workers in protective suits disinfected the Huanan seafood market, where the novel coronavirus is believed to have first surfaced, in early March [File: CNS Photo via Reuters]

As US President Donald Trump doubled down by calling it a “Chinese virus”, a spokesman from China’s foreign ministry tweeted that it was the US military officials visiting Wuhan who had brought the infection with them.
“Chinese officials don’t own his statement, but also haven’t disowned his statement, either,” said Yangyang Cheng, a US-trained physicist who frequently writes on the intersection of politics and science in her native China.
“This reflects a bolder and more aggressive attitude from the highest level of the Chinese government.”
Continue Reading…