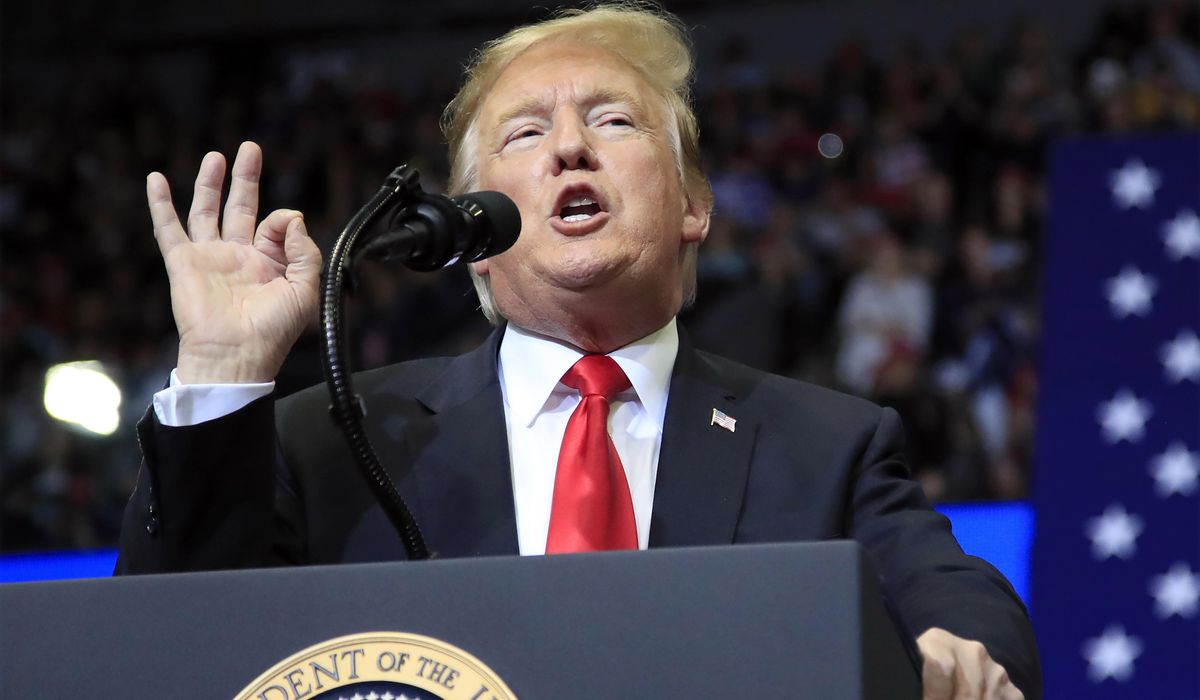 The White House said Sunday that President Trump will nominate a replacement for the late Supreme Court Justice Ruth Bader Ginsburg “very soon,” and the president promised to pick a woman as he quickly seized on the vacancy as an urgent issue to motivate his voters.

As Trump supporters take up the chant of “fill that seat,” Judge Amy Coney Barrett has emerged as the front-runner on the president’s short list of candidates, according to people familiar with the discussions. She is a conservative judge on the 7th U.S. Circuit Court of Appeals in Chicago; the president interviewed her for a seat on the high court in 2018.

“The president is prepared to make a nomination very soon,” Marc Short, chief of staff to Vice President Mike Pence, said Sunday on CNN’s “State of the Union.” “He’s narrowed his list. And he looks forward to making a nomination and fulfilling his obligation as president.”

Mr. Trump said, “It will be a woman — a very talented, very brilliant woman.”

The president’s swift movement to choose a replacement for the liberal Justice Ginsburg, who died Friday at age 87 after a long battle with cancer, underscored the stakes of the nomination.

The vacancy presents Mr. Trump with the opportunity to forge a solidly conservative majority on the court in just four years, after his appointments of Justices Neil M. Gorsuch in 2017 and Brett M. Kavanaugh in 2018.

It also gave Mr. Trump an opening to redefine the presidential election in a year dominated by the COVID-19 pandemic, economic shutdowns, and the erosion of law and order.

“It does change the focus, without a doubt,” said White House Chief of Staff Mark Meadows.

Trailing Democratic nominee Joseph R. Biden in national polls, Mr. Trump moved quickly to emphasize what’s at stake with the Supreme Court and his “moral duty” to make a nomination as soon as possible.

Democrats and two Republican senators, Susan M. Collins of Maine and Lisa Murkowski of Alaska, are calling on Mr. Trump to wait until after the outcome of the presidential election to make a nomination. Two other Republicans would have to agree with them to prevent the 53-47 Republican majority from approving a Trump pick.

The president told thousands of supporters at a campaign rally in North Carolina on Saturday night that he has an obligation to act now.

“So Article 2 of our Constitution says the president shall nominate justices of the Supreme Court,” Mr. Trump told the crowd in Fayetteville. “I don’t think it can be any more clear. … I don’t think so.’”

“Fill that seat,” the crowd chanted.

“That’s what we’re going to do. We’re going to fill the seat,” Mr. Trump said to cheers. “Right now, we’re here and we have an obligation to the voters, all of the people, the millions of people, that put us here.”

In 2016, Mr. Trump won over many evangelical voters by releasing a list of conservative potential Supreme Court nominees from which he would choose if elected. He did so again two weeks ago and called on Mr. Biden to disclose his own list. Mr. Biden has not.

“The Supreme Court was a very central issue in both the 2016 presidential election and then the 2018 midterm elections where, by the way, I didn’t run,” Mr. Trump said. “The bad news for the Democrats is we are more enthusiastic now. We are getting crowds [even in] this pandemic.”

Supporters at the president’s campaign rally in North Carolina agreed that the nomination battle will motivate Mr. Trump’s base.

“It was God’s perfect timing in this election,” Paulette Fittshur, 59, a resident of Leland, North Carolina, told Reuters. “It’s a golden opportunity for conservatives.”

Democrats, too, say the vacancy is firing up their base. ActBlue, the online fundraising platform for Democratic candidates, reported raising a record $70.6 million Saturday after Justice Ginsburg’s death.

Pro-life activists are excited about the chance to put another conservative on the high court, especially because the next justice will replace a pro-choice jurist.

Judge Barrett, 48, a former law professor at the University of Notre Dame, clerked for Justice Antonin Scalia. She is a strict originalist who thinks a judge should “enforce her best understanding of the Constitution rather than a precedent she thinks is clearly in conflict with it,” she wrote in a 2013 Texas Law Review article.

Judge Barrett and her husband, Jesse, have seven children. During her 2017 confirmation hearing to serve on the 7th Circuit, Judge Barrett tangled with the Senate Judiciary Committee’s top Democrat, Dianne Feinstein of California, over her Catholicism.

“The dogma lives loudly within you, and that’s of concern when you come to big issues that people have fought for years in this country,” Mrs. Feinstein told Judge Barrett.

The judge replied, “It’s never appropriate for a judge to impose that judge’s personal convictions, whether they arise from faith or anywhere else, on the law.”

Judge Lagoa, 52, of the 11th Circuit, is the first Hispanic woman to serve on the Florida Supreme Court.

A first-generation Cuban American, she is said to have caught the president’s attention for several reasons: She is a conservative, is relatively young, hails from a battleground state with 29 electoral votes that Mr. Trump badly needs to win, and has an ethnicity that could bring more Hispanic women to his side.

She is also a former assistant U.S. attorney. In 2000, she worked as a private attorney pro bono on a legal team that defended the Miami-based relatives of Elian Gonzalez, the Cuban boy in a high-profile custody dispute between his father in Cuba and his extended family in Miami.

In her speech accepting the Florida Supreme Court appointment in 2019, Judge Lagoa said she would not engage in judicial activism.

“It is the role of judges to apply, not to alter, the work of the people’s representatives,” she said.

The Senate confirmed her for the 11th Circuit seat last November by a lopsided vote of 80-15.

Judge Lagoa’s parents fled Fidel Castro’s Cuba in the mid-1960s. She referred to their experience when she was sworn in to Florida’s high court in May 2019.

“Many of those in this room are the children and grandchildren of individuals who fled from dictatorship,” she said at the time. “Through hard work, education, faith and a strong community, they succeeded. Because of the shared experiences of our parents and grandparents many of us in this room have a special appreciation for the rule of law. We understand what it means when individual liberties, respect for private property, and basic human rights are abandoned by a government. This is why the oath I just took is not just words on a piece of paper to me. Unlike the country my parents fled, we are a nation of laws and not of men.”

Judge Rushing, 38, is a favorite of evangelical groups. She clerked for Justice Gorsuch when he served on the 10th U.S. Circuit Court of Appeals, and for Supreme Court Justice Clarence Thomas.

Another candidate is Kate Todd, deputy assistant to the president and deputy counsel to the president. Despite the president’s pledge to pick a woman this time, he also has expressed interest in Judge Amul Thapar of Kentucky, who sits on the 6th U.S. Circuit Court of Appeals. He is a favorite of Senate Majority Leader Mitch McConnell, Kentucky Republican.