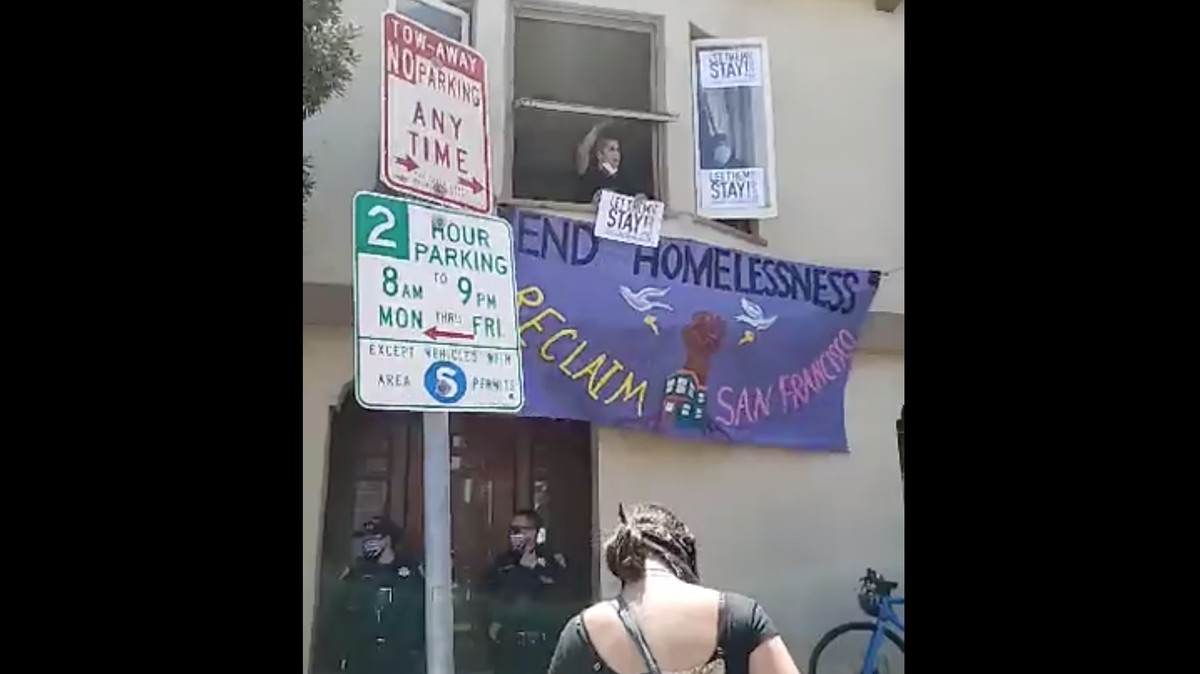 The women, Jess Gonzalez and Couper Orona, said they’re part of a larger group called Reclaim SF. With the help of activists, they moved into the property located in the city’s Castro neighborhood on May 1. According to a Facebook livestream posted by Reclaim SF, several masked San Francisco police officers lined up outside throughout the occupation, and by late Friday afternoon, they had ordered crowds of activists and supporters to disperse or face arrest.

The city is under a “shelter-in-place” order and has banned large gatherings. The San Francisco Police Department did not immediately respond to a request for comment about whether protesters were arrested, but Reclaim SF posted a video to Twitter that appeared to show one person being dragged to the ground and handcuffed while holding a dog.

Gonzalez, who was evicted a year ago and has lived in a vehicle ever since, said in a news release Friday that being “back inside would be like winning the lottery.” City records indicate the property she’s in now is 1,142 sq. feet, and features 7 rooms, although it wasn’t immediately clear who owns the property.

“It’s outrageous that while houses sit empty, we’re unable to safely shelter in place,” Gonzalez, who works as a dog-walker, said in a statement.

San Francisco, a city with nearly 8,000 homeless people, has almost 12,000 vacant properties — more than enough to house every person living in San Francisco’s myriad encampments and shelters. The women want the city’s mayor, London Breed, to use her emergency powers to seize the vacant properties for homeless housing.

“I love my city and I am there for my community, but the way our leaders have ignored our pleas for support is heartbreaking,” said Orona, a retired firefighter and self-described “street medic,” in a news release Friday. “We need permanent housing, and we need it now. We can’t wait another day.”

Gonzalez and Orona said they took inspiration for Friday’s action from the homeless founders of Moms4Housing. The group had occupied a vacant home in nearby Oakland for months until they eventually won the ability to purchase it from its investor-owner and preserve it as permanently affordable housing.

Back in March — when California was in the early stages of its own coronavirus outbreak — a new group of moms also claimed a state-owned property in Los Angeles’ El Sereno neighborhood. They demanded housing for homeless people, especially during the pandemic, too.

Gonzalez and Orona’s occupation is the latest in a series of protests against Breed. On Thursday, homeless people, physicians, and religious activists held a “die-in” outside Breed’s apartment, saying she failed to meet a deadline to provide 8,000 homeless people with hotel rooms. The hotel rooms were ordered by the City’s Board of Supervisors via emergency ordinance on April 14, but the city had only secured 2,500 as of Thursday, according to the San Francisco Chronicle. Breed previously said the deadline was unrealistic.

The emergency order was prompted by one San Francisco shelter that recorded an outbreak of more than 100 people, though individuals there were relocated to hotels or other isolation sites.

“In terms of our total homeless population, San Francisco has done more than any city in the country to move people into hotels, RVs, and other alternative housing sites,” Andy Lynch, a spokesperson for the mayor’s office, said in a statement.

“We have over 1,000 people right now who are in hotel rooms that we have secured, opened, and properly staffed to help ensure the safety of both the residents and the people working at these sites. We’ve secured over 2,700 rooms in total, and just this week we opened another four hotels with 294 rooms. We’re continuing to move more people into these sites every day as we respond to this pandemic,” he added.

Kim Jong Un Has Suddenly Reappeared — at a Fertilizer Factory