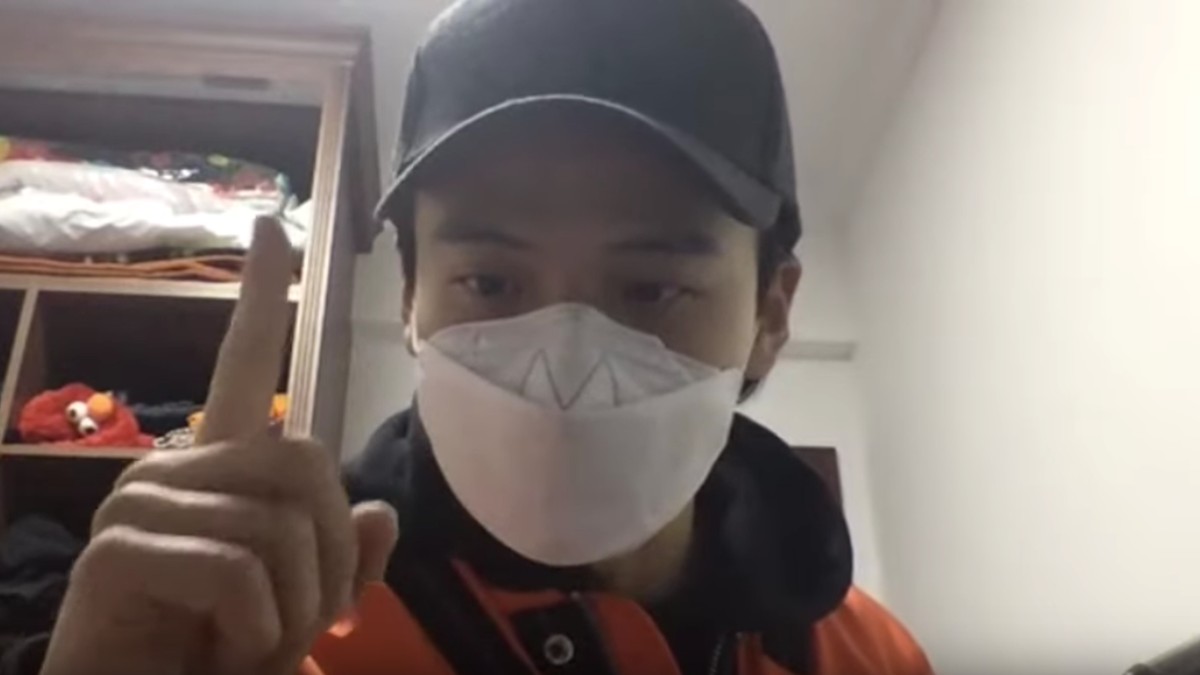 A citizen journalist who was exposing the reality of life inside the Wuhan lockdown zone at the epicenter of the coronavirus outbreak was detained by China’s security forces at his apartment in Wuhan — and the whole thing was captured on camera.

Li Zehua is a former employee of state-run television station CCTV who quit and went rogue earlier this month to report on the situation in Wuhan, and has posted videos from crematoriums, virology labs, and funeral homes inside the lockdown zone.

Li is the third citizen journalist to be detained by authorities in Wuhan in recent weeks and was live streaming on YouTube from his apartment in the city when unnamed officials arrived at his door and stopped the recording.

Li was also secretly streaming the scene to a friend via Skype, and that footage, which was subsequently uploaded to YouTube, shows the people searching through Li’s flat before that video too goes dark.

READ: Here’s how China is hunting down its coronavirus critics

Li’s friend, who refers to himself as “stone,” confirmed to VICE News that Li was taken away by unidentified officers and has not been heard from since Wednesday. He added that Li knew he was being followed but said no one knows who took him, where he was being held — or why.

In recent days, China has been hailing the success of its efforts to stop the spread of coronavirus as infection numbers and the death rate begins to decline. But China’s security officials are showing no signs of slowing down in their efforts to silence dissenting voices critical of the regime and its response to the coronavirus.

As the coronavirus outbreak escalated in February, Li, who was working as a presenter for the state-run television channel CCTV7, suddenly quit his job and moved to Wuhan to document what was happening on the ground.

“But why did I resign from CCTV? The reason is that I hope more young people, more people like me, can stand up,” Li said in his final video.

Li was also inspired by the work of other citizen journalists, such as Chen Quishi and Fang Bin, both of whom were detained over two weeks ago and have not been heard from since.

Since arriving in the city on Feb. 16, Li documented the situation in the Baibuting Community, an area hit particularly hard by the epidemic.

In total Li posted six videos from Wuhan before he disappeared, including one showing a man lying on the ground in the middle of the street, and one featuring interviews with migrant workers who were forced to set up camp in the underground parking garage at Wuchang Railway Station.

One of Li’s most shocking videos showed him talking to porters at a crematorium in the city who said they were being given high wages in order to transport corpses.

On Wednesday, hours before he was detained, he posted another video from his car as he drove around Wuhan.

“I’m suddenly being chased down by the state security police,” Li told the camera. “The car they’re driving isn’t a police car. They’re chasing me, so I can’t live-stream any more. I will just have to leave you with this clip. I’m in Wuhan right now. I’m driving really fast because they’re chasing me. I’m sure that they want to hold me in isolation. Please help me!”

Hours later, at his residence, Li began recording a video when there was a knock on the door. He addressed the men asking if it was OK if he said a few things before they came in.

He begins by saying he admires the people who have tracked him down:

“I admire the diverse methods you employed under the light of day to track down my position so accurately. The way too that you managed to pressure my friends to come over,” Li says, according to a translation from the is China Media Project, an independent research program at the University of Hong Kong.

Li says that throughout his time in Wuhan he abided by all the rules in relation to wearing protective gear and never broke the law.

Since the outbreak began, China’s censors have been working overtime to silence critical voices. They have erased the grief and anger of hundreds of thousands of people in the wake of the death of the whistleblower doctor Li Wenliang. They have silenced social media accounts even if they are not located in China. And they have tracked down critics and knocked on their door seeking an apology.

But all this effort has failed to stop people from having their say.

“The Chinese government’s attempt to silence those who exposed the real situation of the coronavirus outbreak in Wuhan and other parts of China has created opposite effects,” Patrick Poon, Amnesty International’s China researcher, told VICE News. “Instead of scaring off people from further exposé, Li Zehua’s example has shown how a former state media program host would even risk his own safety to release videos to expose the real situation on the ground.”

‘You’re Scumbags’: We Went to the GOP’s Annual Confab and Had a Nice Chat With Seb Gorka