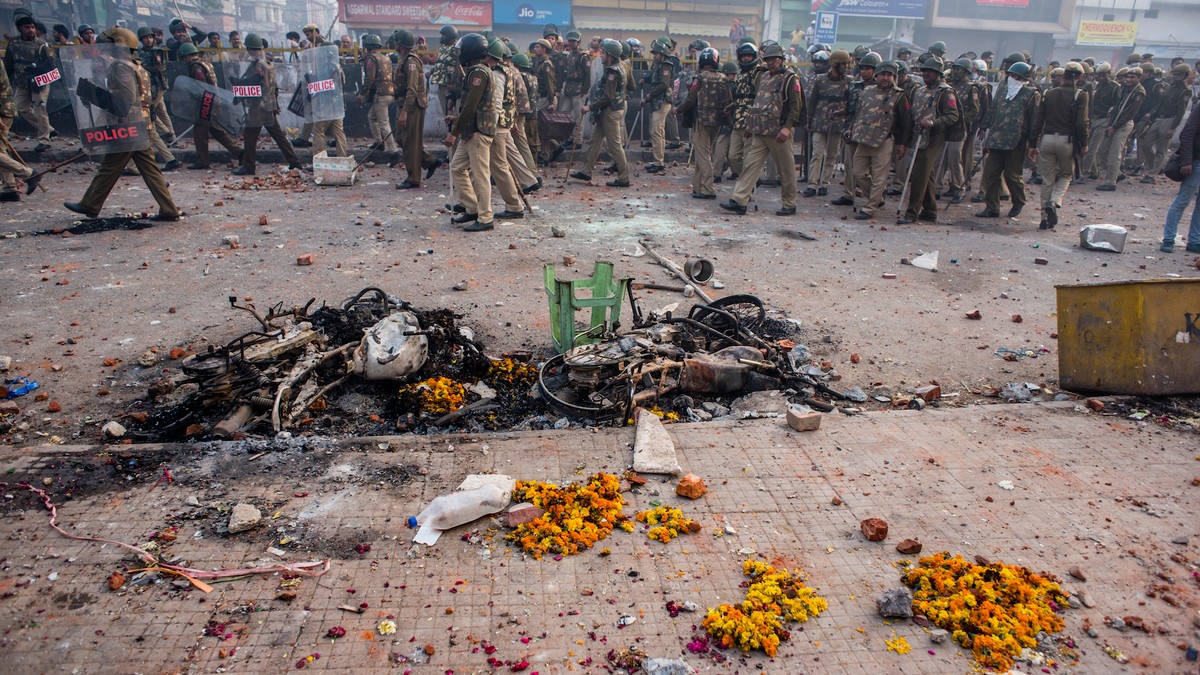 The 22-year-old Muslim student bolted the door as the group, one of many that have rampaged through Muslim neighborhoods in the Indian capital in recent days, tried to force its way inside.

The mob eventually broke in, before torching a motorbike on the doorstep, choking the house with thick black smoke, while police watched. Ahmad’s family of six — along with a neighboring Muslim family of six who had taken refuge in their home — were forced to flee to the roof, eventually escaping by climbing over a wall to another Muslim neighbor’s house.

“The scenes that I saw haunt me,” Ahmad told VICE News, his voice breaking as he recounted the 90-minute ordeal. “Our lives were at stake. These people were lunatics.”

The mob then torched his home, along with other buildings nearby, including the local mosque, storming the building and flying a Hindu nationalist flag from the mosque’s minaret.

“They tore pages from the Holy Koran,” said Ahmad, whose family is now sheltering in a safe house and don’t know if they will ever return to their neighborhood of Ashok Nagar. “We’ve been shaken from the inside. I never thought this could happen.”

New Delhi descended into violence this week because of tensions over the Citizenship Amendment Act, a controversial new law passed by India’s Hindu nationalist government in December. The act creates a pathway to citizenship for undocumented immigrants from three neighboring Muslim-majority countries, as long as they aren’t Muslim.

Opponents, who see the law as an attempt by Prime Minister Narendra Modi’s ruling Bharatiya Janata Party (BJP) to undermine the status of Indian Muslims, have protested against the law for months. But violent attacks started on Sunday after a mob led by a local BJP politician confronted protesters with a provocative speech that’s now being investigated by the authorities, triggering ugly clashes along religious lines.

In the days since, 25 people have been killed and about 200 people hospitalized with injuries including gun and knife wounds, acid burns, and from beatings. While most of the reports of violence have been of Hindu nationalist gangs targeting Muslims, authorities say Hindus have also been among the victims.

Muslims were seen fleeing their homes in the city’s northeast Wednesday in a desperate bid to escape the mobs. VICE News spoke to activists and journalists who said many others remained trapped in their homes, afraid to go outside but also terrified of being visited by the nationalist lynch mobs that have been going from house to house assaulting Muslims and burning their homes.

“It’s a devastating situation right now,” said one activist, who did not want to be named.

“[Hindu nationalist] goons are going to houses of Muslims and banging on the doors, wanting to get inside to thrash them or kill them. People are saying whether we are in our homes or in the streets, we’re going to get persecuted and killed.”

Ismat Ara, a journalist for Indian news site Firstpost, told VICE News she had just returned from Mustafabad, a Muslim neighborhood that’s been affected by the violence.

“A woman, crying, came to me and asked me to let the world know that they don’t want riots,” she said. “They are scared, and the men of their families are risking their lives by guarding the houses in case somebody tries to enter.”

Politicians and judges compared the attacks in the capital Wednesday to infamous episodes in India’s recent history where large-scale violence broke out between religious groups.

“This is [the] Gujarat Model,” tweeted Manish Tiwari, referring to a three-day period of intercommunal violence in the state of Gujarat in 2002, in which 790 Muslims and 254 Hindus were killed. The state was governed by Modi at the time.

“We can’t let another 1984 happen,” said a statement from judges in Delhi’s High Court, referring to the massacre that occurred when organized mobs rampaged through New Delhi and murdered about 2,800 Sikhs.

Modi, who hosted President Donald Trump on his first state visit there this week, broke his silence on the unrest Wednesday, saying police were working to restore order.

But activists and analysts say they have little faith in the authorities to effectively deal with the situation.

The mobs are hard-line supporters of the BJP’s Hindu nationalist ideology, and the violence was sparked by a provocative speech by a local BJP leader Sunday. Meanwhile there have been many reports and footage, besides Ahmad’s, of police standing idly by while the right-wing mobs attacked, or even joining in the assaults.

READ: Facebook has become a “megaphone for hate” against Muslims in India

“There’s literally no distinction between the police and the right-wing goons. We don’t know who the police are any more,” the activist, who did not want to be named, told VICE News. She provided a video of police working to destroy surveillance cameras.

Champa Patel, head of the Asia-Pacific program at international affairs think tank Chatham House, told VICE News that it was “deeply ironic” that Trump had praised Modi for his work on religious freedom Tuesday, as his BJP party had routinely stoked religious tensions.

“The BJP denies it is biased against the Muslims. Their words don’t mean much given their longstanding incendiary rhetoric against this community,” she said.

“It is hard to have confidence that the authorities can really curb the violence, when they have done so much to foster it.”

“Everybody knows the politics of the ruling party,” he said. “These people have always done their politics ‘Divide and rule.’”

Cover: Indian police and paramilitary forces walk past charred bikes and flowers scattered on a road that was destroyed in clashes between groups supporting and opposing the Citizenship Amendment Act on February 24, 2020 in Delhi, India. (Photo by Yawar Nazir/ Getty Images)

The First Legal Safe Injection Site in the U.S. Is Set to Open Next Week. Here’s Why That Matters.