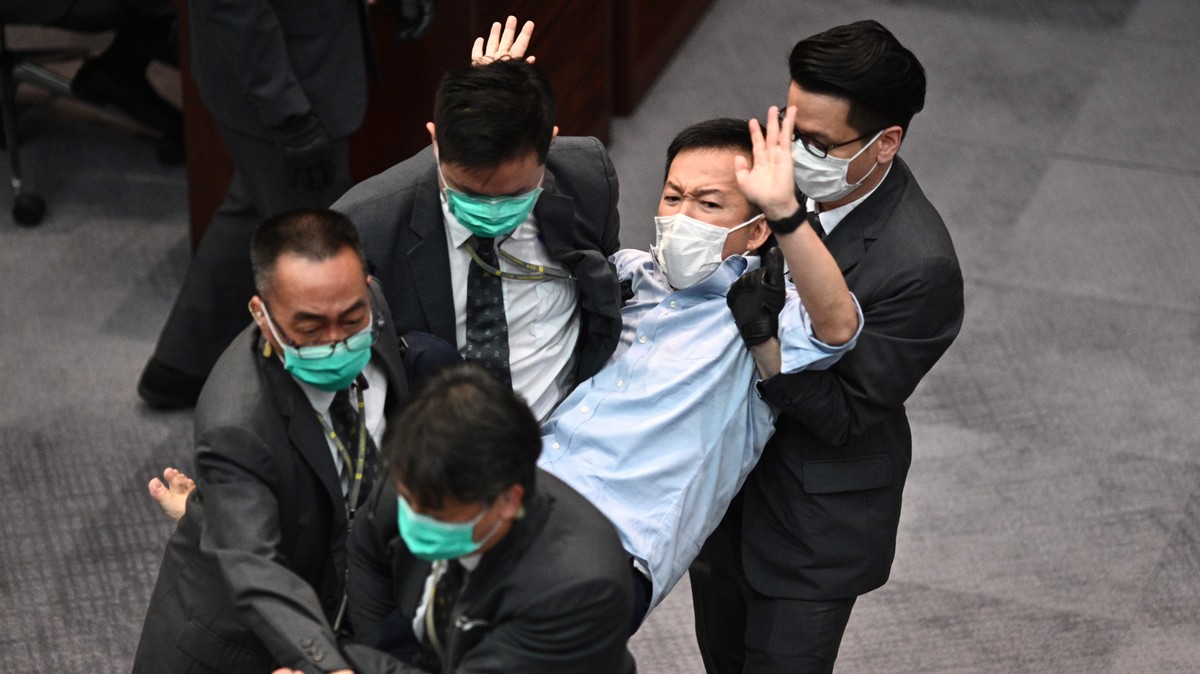 A straight-up fight erupted between pro-democracy and pro-Beijing lawmakers in Hong Kong’s legislature Friday. One man dragged an opponent across the floor by his shirt collar, while paramedics carried another out on a stretcher.

The wild scenes, sparked by a dispute over which side should lead an important committee, signaled a sharp return to the political tensions that had paralyzed the semi-autonomous Chinese city for months before the coronavirus hit. Crowds of pro-democracy protesters, drawn out by calls to mobilize in the wake of the clashes, gathered on the streets near the legislature Friday evening.

Hong Kong’s House Committee, responsible for scrutinizing bills before sending them for a final vote, has been deadlocked for months over the election of a new chair. The disagreement has resulted in a major backlog of legislation, including a controversial bill that would make it a criminal offense to disparage the Chinese national anthem.

Friday’s chaos was triggered when pro-Beijing lawmaker Starry Lee dashed for the podium ahead of the session of the House Committee, during a scramble by rival lawmakers to occupy the chair.

“I have the right to start this meeting,” said Lee, attempting to lead the committee from behind a ring of security guards, while pro-democracy lawmakers surrounded her chanting “Starry Lee has acted outside her powers.”

Some tried to force their way through the security cordon to reach the speaker’s chair, prompting Lee to order them to be evicted by security, while others hurled abuse. Pro-democracy lawmaker Claudia Mo called Lee a “vicious Beijing little worm.”

Ray Chan, of the pro-democracy People Power party, ran barefoot through the chamber as he tried to get past security guards, before he was eventually dragged away by his shirt collar by pro-Beijing lawmaker Kwok Wai-keung, of the Federation of Trade Unions.

“I’m in the ER. I was terrorised by Kwok Wai-keung’s unprovoked & violent assault in Legco,” Chan later tweeted from hospital, adding that the incident showed his opponent’s “true colors.”

Another pro-democracy lawmaker, Andrew Wan of the Democratic Party, appeared to injure his back and was eventually carried out on a stretcher by paramedics. Another pro-democracy voice, Kwok Wing-kin, was dragged away by security guards after he hurled a stack of papers into the chamber.

Hong Kong’s legislature was the scene of scuffles a year ago over a proposed extradition law with Beijing, which eventually spawned the mass protest movement that shook the city for months, and led to protesters storming the complex in July.

The arrival of coronavirus, and the need for social distancing, spelled an end to the mass protests that had drawn hundreds of thousands of people into the streets. But as the threat has subsided, political tensions have ticked up again.

In April, 15 people including senior politicians, lawyers, and a publisher were arrested in a round-up of pro-democracy activists. Beijing has also ratcheted up its rhetoric against the protest movement in recent weeks and described it as a “political virus.”

Early Friday morning, at least seven people were injured when an armed group turned up at one of the city’s Lennon Walls — displays of Post-It notes bearing messages of the city’s protest movement — vowing to tear down the protest site.

Cover: Pro-democracy lawmaker Raymond Chan (C) is carried away by security following scuffles after pro-Beijing lawmaker Starry Lee (not seen) sat in the chairpersons seat before a key committee meeting at the Legislative Council in Hong Kong on May 8, 2020. (Photo by Anthony WALLACE / AFP) (Photo by ANTHONY WALLACE/AFP via Getty Images)

Here’s What Just Happened With Tara Reade and Joe Biden