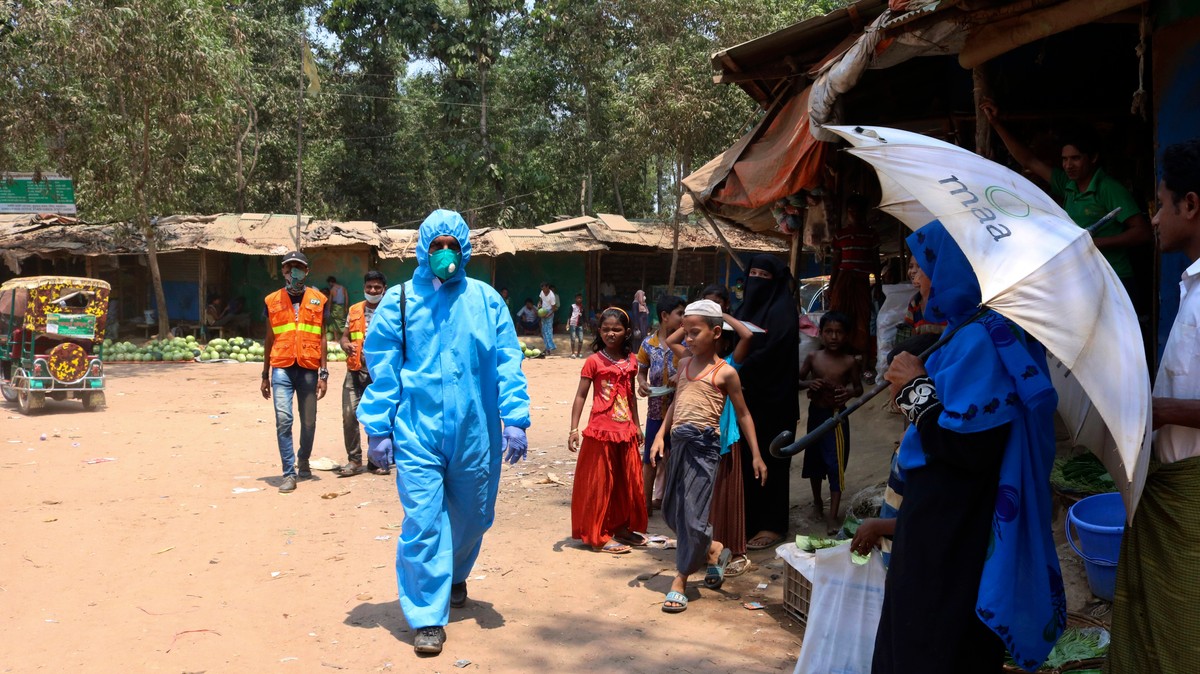 Aid groups are warning of a devastating coronavirus outbreak after COVID-19 was confirmed in the world’s largest refugee settlement, where nearly 900,000 vulnerable Rohingya refugees live in overcrowded and dirty conditions.

The confirmation of the first case in the camps at Cox’s Bazar in Bangladesh late Thursday, was “the realization of a nightmare scenario,” said Daniel P. Sullivan, senior advocate for human rights at Refugees International.

Dr. Shamim Jahan, Save the Children’s health director in Bangladesh, said in a statement that authorities were now facing “the very real prospect that thousands of people may die” in the camps.

“This pandemic could set Bangladesh back by decades,” he said.

Aid groups have long warned that it would be almost impossible to contain an outbreak in the sprawling mass of 34 camps, which are home to about 855,000 Rohingya Muslims, most of whom arrived after fleeing a wave of genocidal violence in neighboring Myanmar in late 2017. In the camps, refugees are packed into flimsy shelters at an average density of about 103,000 people per square mile.

READ: Coronavirus is a “ticking time bomb” on the doorstep of the world’s biggest refugee settlement

The camps have been under a strict lockdown for weeks, with aid groups ordered to drastically cut back their operations in a bid to prevent transmission of the virus into the refugee population, since the first cases were detected in the nearby town of Cox’s Bazar in late March.

“But despite all our efforts, it wasn’t enough,” Deepmala Mahla, Asia regional director for the humanitarian nonprofit CARE, told VICE News. “It’s inside our door now. I’m deeply concerned.”

The U.N.’s refugee agency confirmed the infection, saying the patient, a Rohingya refugee, was being isolated and contact tracing was being carried out. But aid groups and officials fear the virus may have already spread widely.

READ: A Rohingya refugee recalls her escape from Myanmar

Testing in the camps is woefully inadequate, with only 93 tests carried out on refugees until Tuesday, according to the World Health Organization, and social distancing and frequent handwashing is impossible. Refugees live crowded together in one-room shacks, share overburdened toilet and bathing facilities, and many lack adequate access to soap and water.

The confirmed case could not have come at a worse time, just weeks before the start of monsoon season which routinely brings flooding, deteriorating the already poor sanitary conditions in the camps. Sullivan said the monsoons, combined with the underlying poor health of the camp’s residents, made for “a witch’s brew of conditions in which the virus is sure to thrive.”

READ: Coronavirus just hit one of the most vulnerable parts of war-torn Syria

That view is shared by the U.S. ambassador at large for international religious freedom, Sam Brownback, who has previously visited the camps. “It is [so] incredibly crowded that the COVID virus will spread through there very rapidly,” he told reporters Thursday.

The arrival of coronavirus in the camps comes as Bangladesh, one of the world’s poorest and most densely populated countries, is battling an outbreak that is rapidly gathering pace, despite a nationwide lockdown having been in place since March 26. The country has reported 18,863 cases of COVID-19 and 283 deaths.

Cover: In this April 15, 2020, photograph, a health worker from an aid organization walks wearing a hazmat suit at the Kutupalong Rohingya refugee camp in Cox’s Bazar, Bangladesh. (AP Photo/Shafiqur Rahman)

How Trump and Mitch McConnell Have Taken Over the U.S. Court System