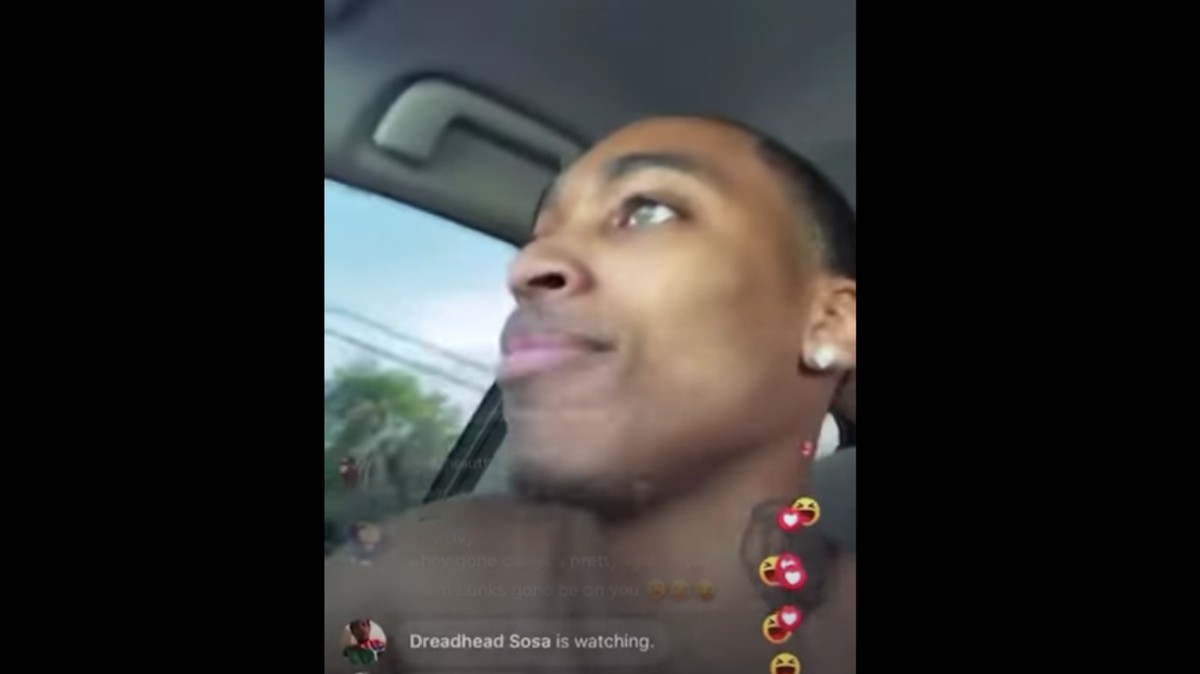 A young man was shot and killed by an Indianapolis cop Wednesday night following a high-speed police chase that appeared to have been partially streamed to Facebook Live, as the driver laughed and sang along to music.

The Indianapolis Metropolitan Police Department hasn’t identified the victim, nor the officer involved in the shooting, which quickly sparked protests at the location of the man’s death, according to the Indianapolis Star.

People shouted “Murder” and “No justice, no peace” as more officers arrived to scene. Family members who gathered there told the Star that the deceased man was 21-year-old Sean Reed, and that they had watched his death unfold on Facebook.

The ACLU of Indiana joined advocates in calling for an investigation into Reed’s death, and a detailed account of what actions officers took to de-escalate the incident.

Police said in a statement Wednesday night the officer involved in the killing has been placed on administrative leave pending further investigation. They haven’t confirmed the authenticity of the livestream, which has since spread widely across social media platforms, but told reporters they’re aware of it.

Both the officer and the victim are black, police said. Police told local NBC affiliate WTHR that they recovered a gun near the scene that was not the officer’s.

The police department said the pursuit started at 6 p.m., after Police Chief Randal Taylor and Deputy Chief Kendale Adams saw a Toyota Corolla “driving recklessly” on the highway, nearly striking other vehicles and “disobeying all traffic signals.” The two officers asked for assistance as they pursued the vehicle, which they said was going about 90 mph.

Around 6:16 p.m., the Toyota turned into the back of a local business. The driver hopped out and ran, according to police, while ignoring commands to stop. Police chased him on foot before an officer deployed his taser, “at which point there was an exchange of gunfire between the driver and the officer,” according to the police statement. The driver was dead by the time emergency services arrived.

In the unconfirmed video of the incident, titled “high speed chase lol,” a shirtless man filmed himself driving a Toyota as police followed behind, singing along to his music. “Tell ‘em to bail me out!” he said multiple times, laughing. “I can’t go back to jail, y’all,” he added.

“Hey sis, I’m sorry, I love you though, you know I had to,” he adds later in the video, which has since been removed from Facebook.

His sister, Jazmine Reed, later told WTHR that she watched the live broadcast. She raced to the location he mentioned in the video.

“Come on baby!” he said as police closed in.

Later, he seemed to grow nervous. After he announced that he was turning onto Michigan Road, where police said the chase concluded, he began talking faster, frantically shouting into his phone. “Somebody come get my stupid ass!” he said to nearly 4,000 viewers, according to the Indianapolis Star. “Please come get me!”

He started to run. Someone can be heard yelling at the man off-camera. “Fuck you,” he replied. Several gunshots ring out.

“Oh my god, oh my god,” someone can be heard yelling off-camera. At that point, the video was pointed at the sky. “Shit. Oh Fuck!” The driver’s music continued playing through his phone.

A separate video appears to record the conversation around the driver after he died. The camera was still trained at the sky. Officers can’t be seen on-screen.

“Looks like it’s going to be a closed casket, homie,” a person commented off-camera later on.

It’s not clear whether that person was a police officer.

“He didn’t think, you know, he’s 21,” Reed, his sister, said in a tearful interview with WTHR. “He didn’t always think before he do some things.”

“I got a two year old, and she loved her uncle so much,” Reed said.

She said he was a good person, formerly in the Air Force, and that police should have handled the incident without gunfire. If he were in jail, Reed said, “I could’ve talked to him on the phone, we could’ve did video chats, he could’ve been behind bars. But now I got to look at him, he’s going to be in a casket the next time I see him.”

Cover: A screen shot appears to show Sean Reed during a Facebook Live stream of his high-speed chase with police. (Facebook)