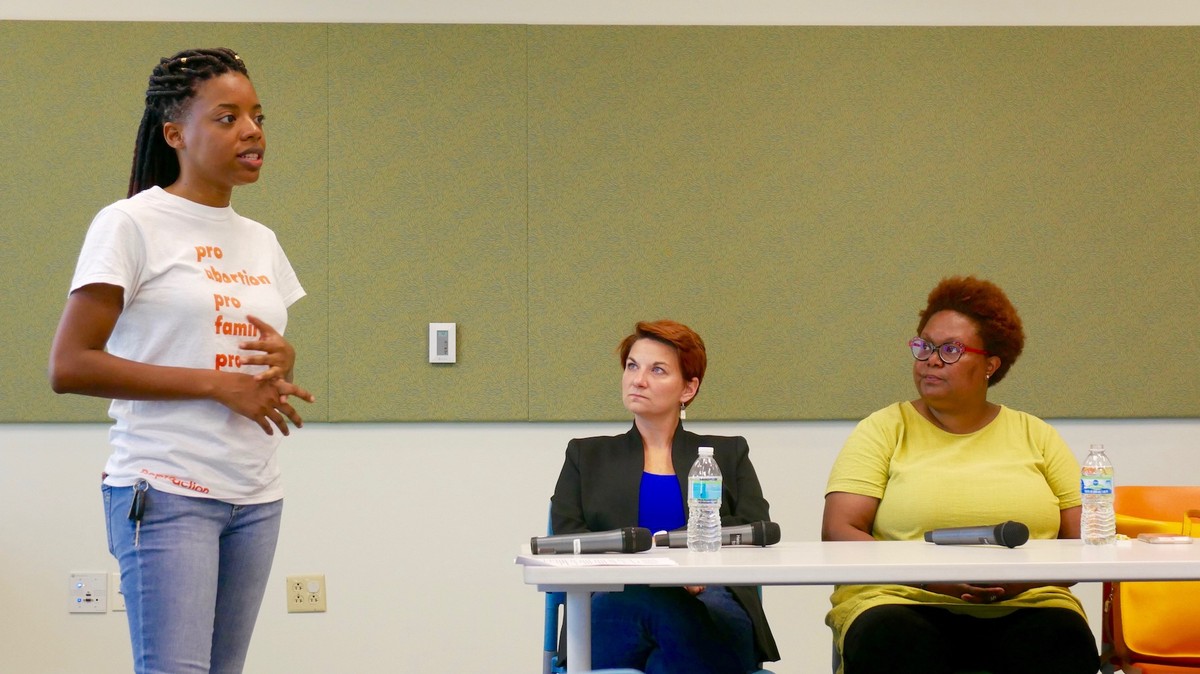 COLUMBIA, Missouri — In the Columbia Public Library, just past a room where a Bible study was wrapping up, a group of people gathered in a conference room to learn how to have an abortion at home.

What happens when you self-induce an abortion? one woman asked the panelists, who sat at a table in the front of the room.

“It depends a little bit on how far along in pregnancy you are. The earlier in pregnancy, generally, the faster it works,” answered Colleen McNicholas, an OB-GYN who works at the last abortion clinic in Missouri. “I would say most people start bleeding within a couple hours of taking the medication.”

“It is very much, in fact, identical to having a miscarriage,” she added.

Abortion rights activists have long warned that overturning Roe v. Wade, the 1973 Supreme Court decision that legalized abortion nationwide, won’t stop people from trying to end their pregnancies — instead, it’ll just force them underground, to the so-called “back alleys.” Advocates spent decades trying to protect the nation’s dwindling supply of abortion clinics, often armed with the motto, “We won’t go back!”


But while Wednesday marks 47 years since Roe was decided, the landmark ruling’s fall looks closer than ever. Over the past decade, states have enacted more than 500 restrictions on abortion, including, in 2019, a handful of bans that would essentially eliminate abortion if they ever went into effect. This March, the Supreme Court will hear arguments in its first abortion rights case since Brett Kavanaugh’s confirmation cemented its conservative majority. Fearing the possibility of a post-Roe United States, some advocates — including those who help run clinics — are working to exorcise the bloody specter of the coat hanger.

Americans can truly never “go back” to the days before Roe, advocates say, because they can now safely order abortion-inducing pills online and safely “self-manage” a first-trimester abortion. And they want to spread the word about how to do it.

Shortly after Donald Trump won the presidency in 2016, the reproductive justice group Reproaction decided to start hosting gatherings to teach people about self-managed abortion. So far, Reproaction has hosted 21 meetings across Arkansas, Missouri, Ohio, Texas, Virginia, and Washington, D.C. — including the one in Columbia — where activists tell attendees about a regimen recommended by the World Health Organization. That protocol details how a drug called misoprostol can induce an at-home abortion, right down to the number of doses you would need to take and when.

Pamela Merritt, Reproaction’s co-founder, told VICE News that she sees self-managed abortion not only as a kind of insurance policy if Roe goes under but also as a way to simply expand the menu of options for abortion.

Reproaction has activists all over the country but frequently focuses on Virginia, Missouri, Wisconsin, and D.C. As a progressive group, it lives in what Merritt calls the “left flank” of the American abortion rights movement, connecting reproductive health care to issues like mass incarceration, gun violence, and the Standing Rock protests. Its activists are also uncompromising about their support for abortion: The local organizer behind the Columbia forum wore a T-shirt emblazoned with the bright orange words “pro-abortion, pro-family, pro-justice” rather than the more traditional and euphemistic “pro-choice.”

READ: A Congressman compared Missouri to something out of ‘The Handmaid’s Tale.’

Reproaction is an aberration among abortion rights activists. Even just a few years ago, some of the more mainstream reproductive rights groups tried to distance themselves from self-managed abortion.

In 2015, Planned Parenthood’s then-president, Cecile Richards, decried a survey from the Texas Policy Evaluation Project that found that up to 240,000 Texas women have tried to end a pregnancy on their own in their lifetime, calling their actions “desperate measures.” Researchers suggested that their discovery may be tied to Texas’ severe regulations on abortion clinics, which have left them an endangered species in the state.

“Most people thought we were well past the days of women taking matters into their own hands,” Richards said, “but laws that make it impossible to get safe and legal abortion are taking us backwards.”

Farah Diaz-Tello, senior counsel for If/When/How, an organization that supports self-managed abortion, can see where opponents are coming from. She characterized their attitude as, “We worked really hard to get good, high-quality care for people who need abortions. And are we now saying that people are going to — we’re going to send them off into the wilds of the internet to receive their care? That is not the feminist ethic that has driven abortion care to this day.”

“I was 17 when Roe v. Wade passed, and I remember marching for it. And it makes me so angry that we’re here again.”

But Colleen McNicholas’ very presence on the Reproaction panel signaled how rapidly attitudes toward self-managed abortion have changed over the last few years: She’s the chief medical officer for Planned Parenthood of the St. Louis Region and Southwest Missouri.

During the panel, she told attendees, “Every kind of abortion you could get is safer than being pregnant. Especially in the state of Missouri.”

“So long as we have a safe option that can be accomplished outside of a clinical or medical setting, there’s no reason that shouldn’t also be available,” McNicholas added in an interview. “It doesn’t abdicate our responsibility to also find ways to make in-clinic or in-hospital or medicalized abortion available to these communities as well. We need to do that, too. But we can do both together.”