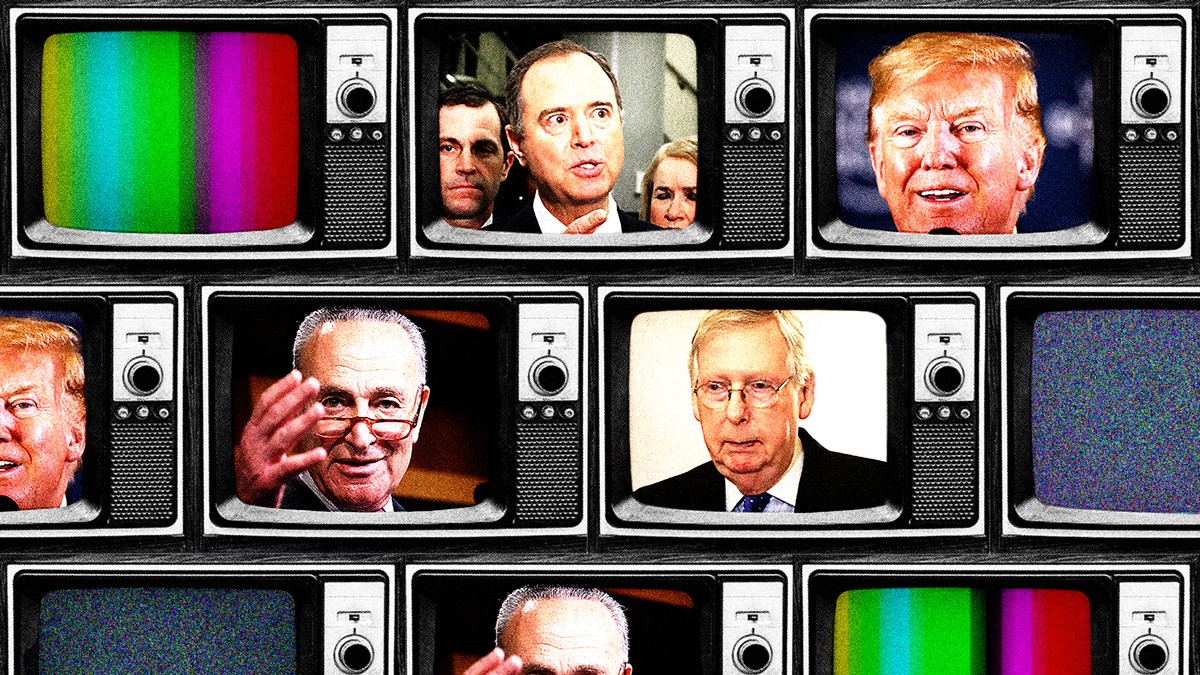 And, like everything in contemporary Washington, lawmakers of all stripes are blaming all the made-for-TV drama on the other side, even as they jockey for viral moments in the YouTube era.

No real-life witnesses? Democrats have a workaround: Video clips from previous House hearings and cable news interviews. Trump’s media-pro defense team, meanwhile, comes to the floor with a staggering 1,368 combined appearances on Fox News. The four Democratic senators running for president suddenly forced into jury duty? They’re all but leaping in front of the cameras in the Capitol hallways.

New rules are keeping reporters penned outside the Senate chamber, so they can’t easily question senators, even as the TV interview station in the Capitol’s basement has grown so popular that lawmakers are literally lining up for TV hits.

This peculiar Washington spectacle reflects a trial destined to acquit Trump, which both sides will want to spin in their favor as the November election draws near. Spoiler alert: In the end, Trump will argue the trial vindicated him. Democrats will say they proved beyond any reasonable doubt that Trump and GOP lawmakers staged the cover-up of the century.

As both sides scramble to control the media narrative, they dismiss their opponents as mere grifters riffing for the cameras.

“The whole case that was laid out by Adam Schiff was made for television.”

“The whole case that was laid out by Adam Schiff was made for television,” Meadows told VICE News. “He’s been so redundant that it makes a Geico commercial look casual.”

Senate Minority Leader Chuck Schumer (D-N.Y.) begged to differ, of course — in front of an array of cameras.

“The arguments of the president’s lawyers were like a Fox News show: A lot of finger-pointing and nothing to do with the actual facts,” Schumer said.

This isn’t business as usual. The Senate passed a special resolution to allow screens on the Senate floor.

Senators watched a clip of Trump calling on both Ukraine and China to investigate former Vice President Joe Biden. They heard Trump, whose lawyers oppose all witnesses, say he’d “love” to see his top aides testify.

They even watched Trump brazenly assert that Article II of the U.S. Constitution means “I have the right to do whatever I want as president.” They heard Mick Mulvaney, Trump’s acting chief of staff, say, “There’s going to be political influence in foreign policy.”