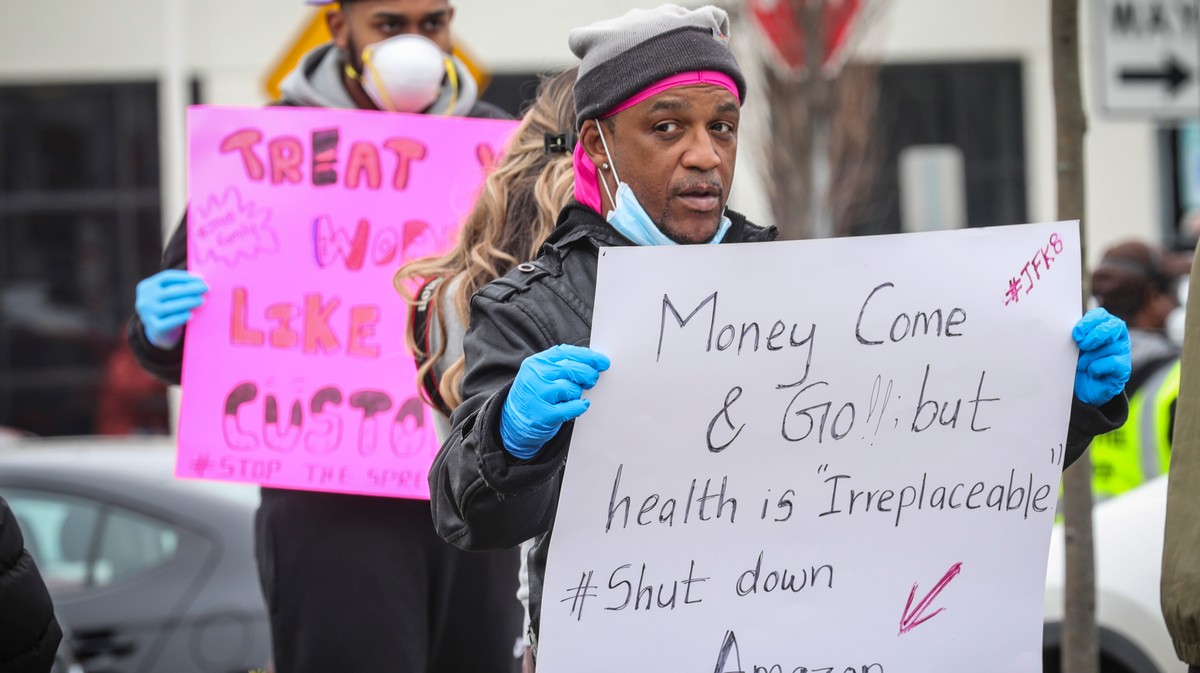 After he helped organize some of his fellow workers to walk out at an Amazon warehouse on Staten Island over coronavirus-related safety concerns, Chris Smalls was fired from his job. Amazon says he violated a company order to self-quarantine and put his fellow workers at risk of contracting the coronavirus; he says it’s retaliation.

“It’s a shame on them,” Smalls told VICE News. “This is a proven fact of why they don’t care about their employees, to fire someone after five years for sticking up for people and trying to give them a voice.”

Amazon says that they fired Smalls for “violating social distancing guidelines and putting the safety of others at risk.”

“He was found to have had close contact with a diagnosed associate with a confirmed case of COVID-19 and was asked to remain home with pay for 14 days, which is a measure we’re taking at sites around the world,” Amazon said in a statement provided to VICE News. “Despite that instruction to stay home with pay, he came onsite today, March 30, further putting the teams at risk. This is unacceptable and we have terminated his employment as a result of these multiple safety issues.”

Amazon has publicly confirmed that two workers at the JFK8 warehouse have tested positive for coronavirus, though Smalls told VICE News Monday that he believes several more workers have contracted the illness than Amazon is publicly confirming. Smalls told VICE News Monday that workers were walking off the job in an effort to force Amazon to shut down the facility and sanitize it, with full pay for workers while the facility was closed.

READ: Amazon workers in New York have started walking off the job: ‘This is a cry for help’

Smalls disputed the order to self-quarantine, and said that when he was ordered to go home last Saturday, it was never made clear to him when the quarantine order was supposed to have started. Amazon said earlier this month that the first worker who tested positive last reported to work on March 11, nearly three weeks ago, according to Motherboard.

“You put me on quarantine for coming into contact with somebody, but I was around [my co-worker] for less than five minutes,” he told VICE News. “[The co-worker] was with my associates for ten-plus hours a week, I’ve been communicating with [management] all week but no one else was put on quarantine.” (Amazon did not immediately respond to an email Tuesday morning asking how many people at the site have been ordered into self-quarantine.)

The company confirmed that no one else was fired Monday, and said that no one would be let go or be disciplined for participating in the action. Still, the decision to fire Smalls drew rebuke from Athena, a coalition of progressive social and economic justice groups working to counter Amazon’s outsized influence on the economy and public policy.

“Chris, along with many of his colleagues in New York and around the country, have dared to tell the truth about the dangerous conditions at Amazon facilities,” the directors of Athena, Make the Road NY, and New York Communities for Change said in a joint statement. “We can only conclude that instead of listening to the people who are actually risking their lives on the front lines, Amazon would rather they just shut up about Amazon working conditions, which are now a national public health concern.”

Aside from the fact that he was fired yesterday, Amazon and Smalls don’t agree on much. Following the publication of a story on the walkout yesterday, Amazon contacted VICE News to dispute both the size of the protest and Smalls’ job title and role. The company said Smalls wasn’t an assistant manager and didn’t supervise employees, both of which Smalls disputed. (In other media reports, Smalls has also been described as a “process assistant” and a “manager assistant.”)

And while the organizers said over 60 workers walked off the job at the JFK8 warehouse Monday, Amazon said just 15 walked off — “less than half a percent of associates” who work at the 5,000-plus employee warehouse, the company said in a statement. The company also claimed that any additional workers captured in the total just happened to be on their lunch break at the time.

“They have no idea what they’re talking about. They spin stuff, they lie, they downplay, I’m not a manager all of a sudden; I’m an hourly associate,” Smalls told VICE News. “That’s what they do to the press. They tell y’all bunch of lies and everything. It is what it is.”

On Monday night, Smalls got some powerful backup: New York Attorney General Tish James tweeted her support for him, said she was “considering all legal options,” and called on the National Labor Relations Board to investigate.

“Amazon, this is disgraceful,” James tweeted.

Though he said he expected to be fired after the leading role he played in the walkout, Smalls said he plans to pursue action against the company for his dismissal. “It’s a no brainer. Anyone can see this is a direct target,” he said.

Amazon Workers in New York Have Started Walking Off the Job: ‘This Is a Cry for Help’