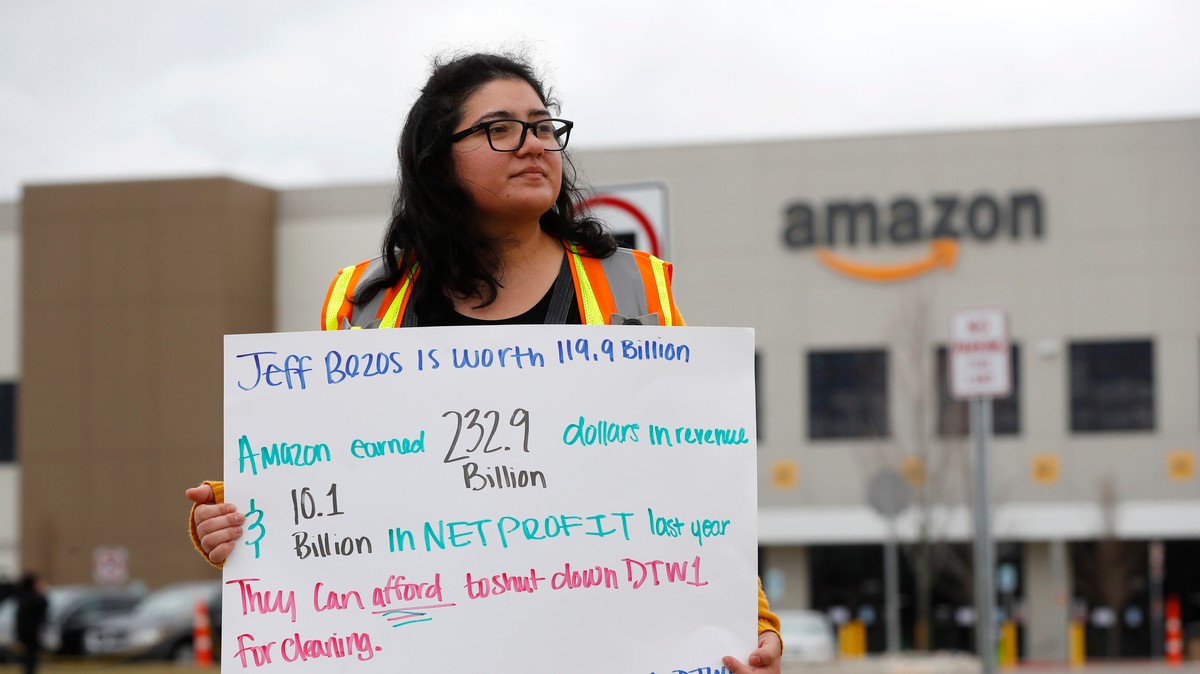 “While we continue to investigate, the information so far available to us raises concerns that Amazon’s health and safety measures taken in response to the COVID-19 pandemic are so inadequate that they may violate several provisions of the Occupational Safety and Health Act,” James’ office wrote in a letter to Amazon dated April 22, according to NPR. (James’ office declined to provide a copy of the letter but confirmed its existence in an email to VICE News.)

Amazon’s safety practices have come under heavy criticism in the past few months from its own employees, workers advocacy groups, and elected officials, as the company has taken an even larger role in the U.S. economy due to the coronavirus shutdown.

It’s not limited to New York, either. Over the weekend, dozens of workers at a facility in Minnesota walked out to protest the firing of staffer Faiza Osman, who was staying home out of fear she could contract the illness and spread it to her children. Osman has since been reinstated without Amazon ever confirming she was fired in the first place, according to Motherboard.

Last month, the company fired Staten Island warehouse worker Christian Smalls, alleging that he put his fellow workers at risk by breaking a company-imposed quarantine. But Smalls says he was fired in retaliation for organizing protests calling for increased transparency and better safety measures from Amazon, and according to leaked notes from an April 1 meeting of senior executives including Jeff Bezos, Amazon general counsel David Zapolsky suggested focusing the company’s PR efforts on Smalls and making him “the face of the entire union/organizing movement.”

The letter from James’ office cites “serious concern that Amazon may have discharged [Smalls] in order to silence his complaints and send a threatening message to other employees that they should also keep quiet about any health and safety concerns,” according to NPR.

“This Office has learned that many workers are fearful about speaking out about their concerns following the termination of Mr. Smalls’ employment,” the letter said, according to NPR.

“This is a particularly dangerous message to send during a pandemic, when chilling worker speech about health and safety practices could literally be a matter of life and death.”

Smalls has hired Atlanta-based attorney CK Hoffler, who is the president of the National Bar Association and serves as the chair of Rev. Jesse Jackson’s Rainbow PUSH Coalition, to “lead and coordinate Smalls’ legal, civil, and human rights team against Amazon,” according to an April 25 press release from the firm. Smalls described the letter from James’ office as “amazing and powerful” in a text to VICE News.

“I’m grateful for the efforts put into the letter on behalf of the AG office and appreciative of my legal team that’s been working together to get all the facts together,” Smalls told VICE News.

Emails from VICE News to Smalls and Athena, an Amazon workers and consumer advocacy group, were not immediately returned.

Amazon spokesperson Rachael Lighty declined to comment on the letter from James’ office directly, but repeated the company’s claim that it fired Smalls for breaking social distancing guidelines, and said that protest “does not provide blanket immunity against bad actions, particularly those that affect the health, safety, or well-being of their colleagues.”

Lighty also insisted that Amazon has taken steps to protect employees, including implementing more than 150 new “process updates” and providing masks to employees. “We encourage anyone interested in the facts to compare our overall pay and benefits, as well as our speed in managing this crisis, to other retailers and major employers across the country,” Lighty said.

Cover: Breana Avelar, a processing assistant, holds a sign outside the Amazon DTW1 fulfillment center in Romulus, Mich., Wednesday, April 1, 2020. Employees and family members are protesting in response what they say is the company’s failure to protect the health of its employees amid the new coronavirus COVID-19 outbreak. (AP Photo/Paul Sancya)

New York City Tenants Want the State to Cancel Their Rent. So They’re Going on Strike.