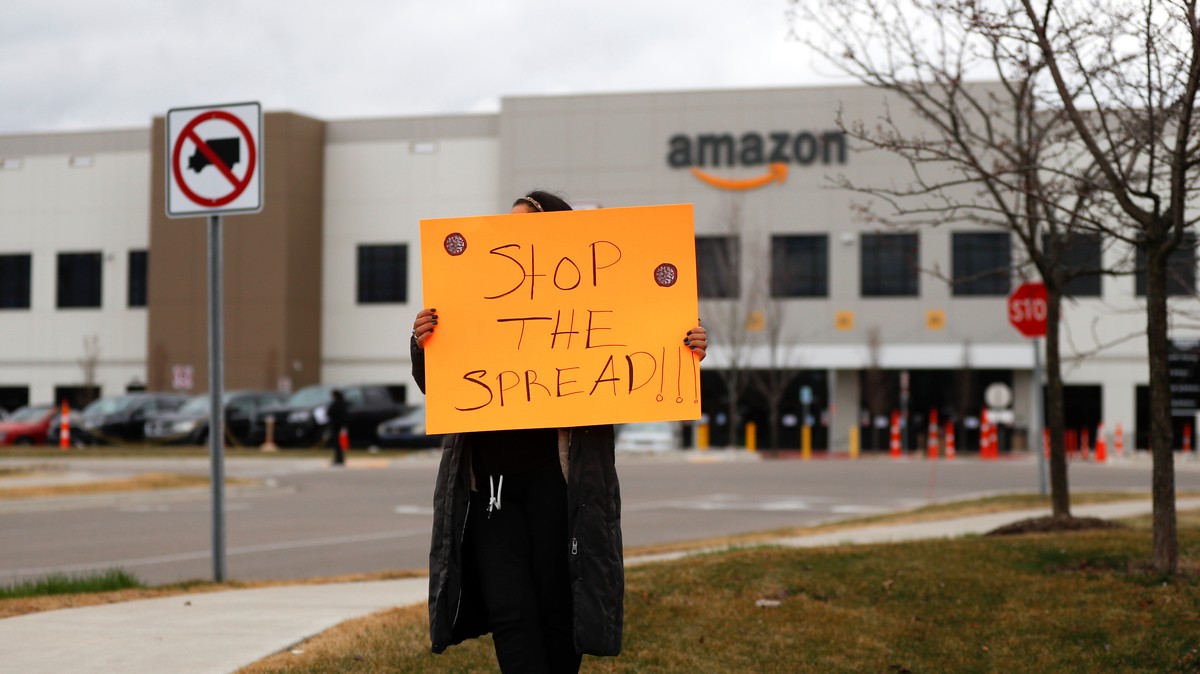 For the second Monday in a row, Amazon workers at the JFK8 fulfillment center on Staten Island are planning to walk off the job due to concerns that the company isn’t taking worker health and safety seriously during the coronavirus pandemic.

Warehouse workers and Athena, a coalition of labor and social justice groups that formed to take on Amazon, are calling on the company and New York Gov. Andrew Cuomo to shut down work at the warehouse until it’s been deep-cleaned and sanitized, with full pay for those who can’t work during the closure, among other demands.

As of last Wednesday, there were five confirmed coronavirus cases at the facility, according to the Verge. Advocates now say the warehouse employees have heard of at least 25 confirmed cases of coronavirus, and that the company is texting workers at the site “almost daily” with reports of new cases.

“They’ve been sending out these mass texts in bulk every single day, and we’ve been tallying them up,” Christian Smalls, a former worker at the warehouse who organized last week’s walkout and was fired the same day, told VICE News on Monday. “But that’s just the ones they’ve sent out. There are managers they’ve been quarantining and not telling people about.” Smalls estimated that there’s at least 30 cases at the facility.

So far, there have been confirmed positive cases in over 50 Amazon facilities nationwide, according to the New York Times. Amazon did not immediately respond to a request to confirm the number of positive cases at the Staten Island site.

Amazon has steadfastly denied accusations that they’re not taking worker health and safety seriously. “We are all learning and adapting quickly through this process, and [Amazon employee] feedback has led to changes to over 150 processes across operations and the rollout of significant health and safety measures,” Dave Clark, Amazon’s senior vice president of worldwide operations, wrote in a company blog post last week.

The measures being implemented include temperature checks, personal protective equipment, and “daily audits” of new safety measures, according to Clark. He also said that the company has hired over 80,000 new workers as part of an initiative announced last month to bring on 100,000 new employees to meet the surge in demand for delivery services.

Among the workers’ other demands are an extension of paid time off for employees who haven’t tested positive but are showing symptoms of the coronavirus; currently, those employees are encouraged to use unpaid sick leave or earned paid time off, according to a BuzzFeed News report published last week.

The walkout at the Staten Island fulfillment center comes after similar labor actions last week at a Chicago delivery station and a Michigan fulfillment center. After last week’s protest at JFK8, Smalls was fired in what he said was retaliation.

Amazon claimed that he was fired for breaking a company-imposed paid quarantine by showing up to the protest, but a leaked memo from an internal meeting obtained by VICE News showed that the company’s senior leadership team discussed making Smalls “the face of the entire union/organizing movement.”

The company’s general counsel, David Zapolosky, also said that Smalls was “not smart or articulate.”

“I was frustrated and upset that an Amazon employee would endanger the health and safety of other Amazonians by repeatedly returning to the premises after having been warned to quarantine himself after exposure to virus Covid-19,” Zapolosky said in a statement to VICE News. “I let my emotions draft my words and get the better of me.”

READ: Amazon workers in New York have started walking off the job: ‘This is a cry for help’

Last week’s protest saw 62 workers walk off the job, according to organizers, although Amazon has pushed back on that number and said only 15 actually walked off and many of the rest were on a lunch break. Similarly, the company said that fewer than 15 workers walked off in Romulus last week, while organizers claimed that at least 40 had done so, according to the Verge. (In his blog post, Clark said a “few hundred employees” had walked out in total.)

In a text message to VICE News, Smalls said that he expects “twice as many employees to participate in [Monday’s] event to cease operations and have demands met.”

While Smalls said he hasn’t spoken with anyone from Amazon’s corporate offices since his firing and last week’s leak, Smalls said he’s been in contact with Amazon workers across the globe. “I’ve talked to organizers from all over the world,” he said. “Germany, Canada, Japan, Brazil, the UK… they all reached out.”

Cover: A family member of an employee holds a sign outside the Amazon DTW1 fulfillment center in Romulus, Mich., Wednesday, April 1, 2020. Employees and family members are protesting in response to what they say is the company’s failure to protect the health of its employees amid the new coronavirus COVID-19 outbreak. (AP Photo/Paul Sancya)