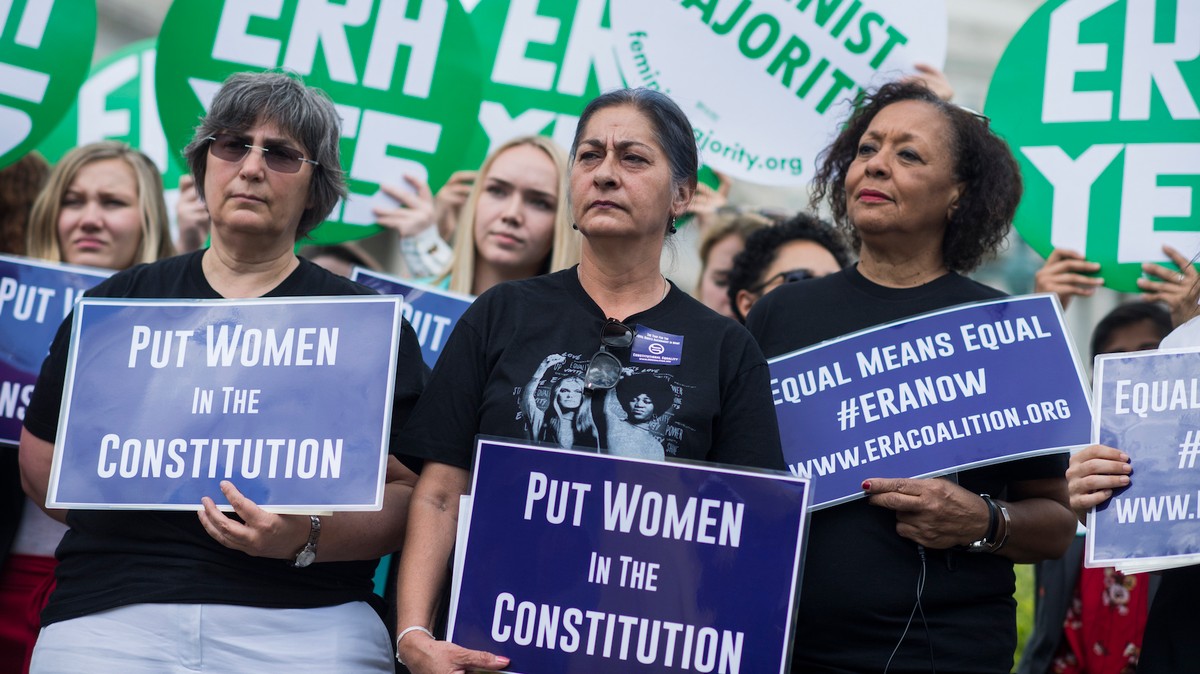 Nearly a century after it was first proposed and almost 50 years since it first passed in Congress, an amendment protecting women’s rights is set to finally make its way into the U.S. Constitution.

On Tuesday, Virginia legislators in both the state Senate and House are expected to vote to pass resolutions in support of ratifying the Equal Rights Amendments, which declares, “Equality of rights under the law shall not be denied or abridged by the United States or by any state on account of sex.”

While those 24 words may seem simple, the century-long battle to enshrine them in the Constitution has been anything but. Even if Virginia succeeds in becoming the 38th state to ratify the ERA, meaning that the amendment theoretically has enough state support to become official, all three branches of the U.S. government are already facing questions about whether it’s simply too late.

READ: The war to ratify the Equal Rights Amendment just took a hit. But the battle isn’t over.

The resolution to support the ERA passed Tuesday afternoon in the Virginia House of Delegates, where debate was interrupted with chants of “ERA!” While the Virginia Senate has voted to ratify the ERA in the past, Tuesday marked the first time that the House has done so — thanks, in large part, to the wave of Democrats that swept into office in Virginia’s November elections and flipped the state legislature from red to blue.

“It’s really about women understanding that our fundamental rights are not guaranteed,” Jennifer Carroll Foy, a Virginia House Delegate and lead sponsor of the ERA resolution, told VICE News before the vote. “Sex discrimination is still rampant. So we understand that we have to take a seat at the table, because that is the only way that our interests will be protected.”

The idea of an ERA was first proposed in 1923 by suffragette Alice Paul. But Congress didn’t pass the amendment until 1972, when the women’s rights movement was arguably at its height in the United States. Three-quarters of the nation, or 38 state legislatures, needed to ratify the ERA before it could join the Constitution. Congress initially gave the states until 1979 to do so, then bumped the deadline until 1982.

“What you see now is a culmination of so many people’s efforts over the years to come to a fruition.”

By then, a conservative movement against the ERA had mobilized, arguing the amendment would force women into military combat, undermine men’s mandate to support their wives and children, and legalize same-sex marriage. The “Stop ERA” campaign successfully derailed the amendment: Only 35 states had ratified it by 1982.

At the time, Carroll Foy was just about 1 year old. But while the country has changed quite a bit since the 1980s, she says the amendment is still necessary in order to raise the standards used to judge the constitutionality of laws that may discriminate on the basis of sex. She points to the #MeToo movement and the historic wave of women who won elections in the 2018 midterms as proof that women are now realizing they still need more rights and representation.

“There’s been women who’ve been beaten, and who’ve marched and rallied and fought for their entire lives for this issue,” Carroll Foy said. “What you see now is a culmination of so many people’s efforts over the years to come to a fruition.”

In 2017, Nevada legislators voted to become the first state in more than three decades to ratify the ERA. A year later, Illinois followed suit.

READ: What it’s like to flip the House as a female candidate in 2018.

Virginia’s vote on Tuesday won’t officially count as a vote to ratify; both legislative chambers must also vote to pass one another’s resolutions, which they’re expected to do. Once that happens, the ERA will head to the archivist of the United States, who is in charge of “publishing” all Constitutional amendments.

Under normal circumstances, that publication would be little more than a ceremonial signoff. But thanks to the ERA’s unique history, it’s set to become an obstacle.

“It could be that those conservatives on the court basically reverse that 100 years of precedent to strike down the ERA.”

Modern advocates for the ERA say that Congress’ ratification deadlines don’t matter, because they weren’t included in the original text of the amendment. In early January, the Department of Justice announced that its Office of Legal Counsel disagreed with that analysis. The office concluded instead that the deadlines are valid, so the ERA is “no longer pending before the states.”

The archivist’s agency has said that it will abide by the Department of Justice’s opinion, unless a court order says otherwise. Two federal lawsuits have already been filed against the archivist over the ERA, and those could well end up at the Supreme Court.

But historically, neither the executive nor the judicial branch of government really has any authority in the amendment process, said Robinson Woodward-Burns, an assistant professor of political science at Howard University who has written about the ERA. He believes that the Supreme Court may shunt the question of the ERA to Congress.

“There’s sort of a longstanding precedent that suggests that the court would have to recognize either Congress’ time limits or willingness to lift those time limits. Now, we do have a conservative court,” Woodward-Burns said. “It could be that those conservatives on the court basically reverse that 100 years of precedent to strike down the ERA.”

Congress has already tried to weigh in, as Democratic legislators like New York Rep. Carolyn B. Maloney and California Rep. Jackie Speier have previously introduced legislation that would, respectively, either restart the ratification process entirely or lift the deadline. But although Republican Sens. Lisa Murkowski, of Alaska, and Susan Collins, of Maine, have lent their support to pro-ERA legislation in the past, those measures would almost certainly flail in the GOP-controlled Senate.

“If we had a Democratic president and if Democrats had a Senate majority, I would say there wouldn’t even really be a debate about whether the amendment is valid,” Woodward-Burns said. “There would probably still be lawsuits, but I think that bicameral congressional vote would basically seal the ERA into the Constitutional without any dispute.”

Now, though, “It’s more of a partisan issue than a constitutional crisis.”

Delta Dumped Jet Fuel on a Bunch of Elementary School Kids. What. The. Hell.