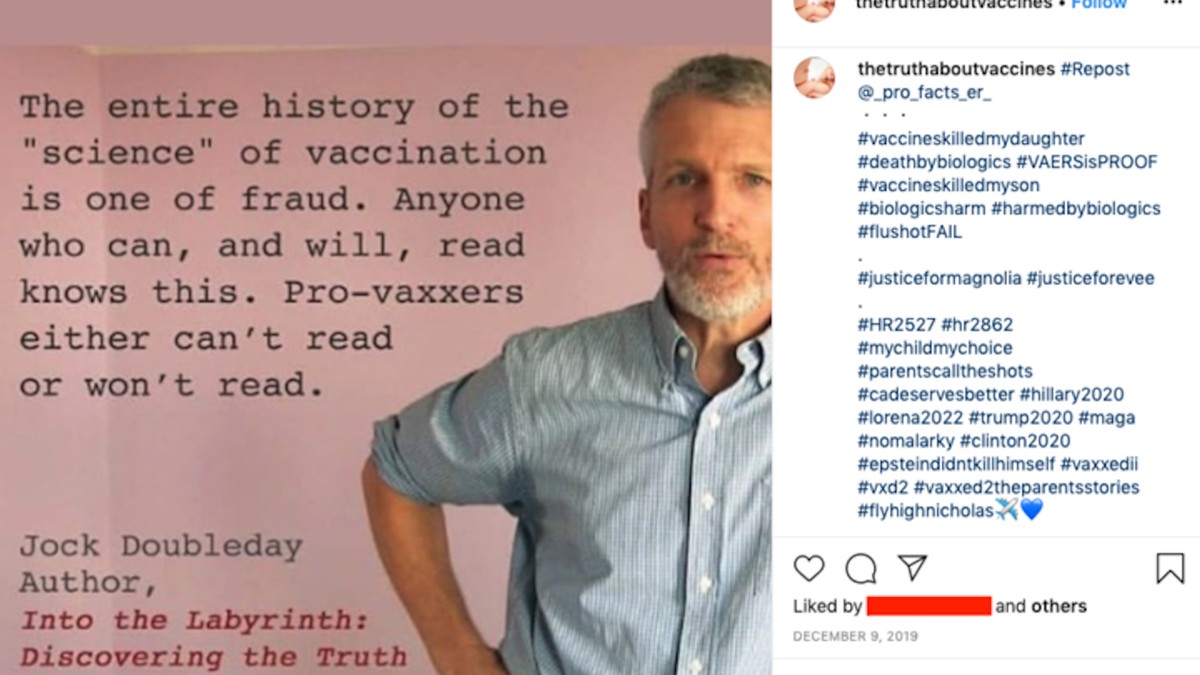 A network of more than two dozen accounts is pumping out hundreds — and perhaps more — of anti-vaxx Instagram posts with the tags, according to the social intelligence firm Storyful. It’s an early preview of how anti-vaxxers could use the chaos around the election as a springboard on social media.

“The biggest cause of vaccine hesitancy in this country is the lack of true vaccine science,” said a Monday post from a prolific account, @_pro_facts_er_, that included a misspelled take on the Bidenism, #nomalarky.

“It’s a cross-pollination into new communities and new audiences,” said Renée DiResta, research manager at the Stanford Internet Observatory. “They just want to piggyback on whatever is popping.”

An overwhelming majority of Americans believe in vaccines. Of the fraction who are hesitant, a miniscule slice of true believers push a big chunk of the misinformation on social media, said Sean O’Leary, a member of The American Academy of Pediatrics’ Committee on Infectious Diseases.

That’s thought to have contributed to dipping vaccination rates and the return of previously eradicated diseases, like measles, in countries including the United States.

“This stuff that they spread is so far from the truth, and yet it takes a hold.”

“That’s why you see so much frustration from pediatricians and policymakers,” O’Leary said. “This stuff that they spread is so far from the truth, and yet it takes a hold.”

Storyful found more than 300 examples of anti-vaxx Instagram users congregating around 2020 hashtags over the past two months. The uptick came after Instagram and parent company Facebook announced they would disable or limit the distribution of prominent anti-vaxx hashtags, such as #vaccineskill, that met an unspecified threshold for false or misleading content.

In a statement to VICE News, a Facebook spokesperson said it had cut the reach of the central account in the network, @_pro_facts_er_, as it reviewed other users.

“We work to limit the spread of vaccine misinformation on Instagram,” they added in a statement. “When an account repeatedly posts misinformation, we take action. This includes making content from that account harder to find, for example, by filtering it from Explore and hashtag pages.”

At least dozen other anti-vaxx accounts revolves around @_pro_facts_er_. It shares 61 percent of its nearly 14,000 followers with noted anti-vaxxer Robert F. Kennedy Jr., according to profile information published by Instagram. And its 4,700-plus posts largely veer toward vaccine-related fear mongering, which appears to be in service of opposing legislative proposals in Washington last year to bolster vaccination efforts.

“If we do not get up off our knees and stop worshipping scientists and doctors who have too little knowledge and have been given too much power, tomorrow we will not be able to get on a bus, train or plane,” one meme said.

Other content, which was often reposted by other accounts, hypes more ominously conspiratorial framing of government surveillance in healthcare. Although Instagram’s recent move to shield “Like” counts makes it difficult to gauge individual posts’ reach, they frequently drew up to a few dozen comments apiece.

The owner of @_pro_facts_er_, who launched the account in 2012, didn’t respond to VICE News’ messages seeking comment.

Tech companies have taken divergent approaches to this misinformation amid growing pressure from medical professionals over the past year. Facebook said it would curb medical misinformation in ads and organic posts, pointing users to official information and downranking certain content. While those efforts effectively cut down the reach of explicit tags like #vaccinescauseharm, they still allow conspiracy theorists some room to wiggle through the cracks.

Earlier this month, Facebook representatives told BuzzFeed News that while the company prohibits advertising misinformation around vaccines, it allows ads that oppose vaccination. Many users posting organic content simply raise questions about informed consent or the health benefits of vaccines, while others tweak the spelling of hashtags and account names to avoid censors and stay online.

Researchers and medical professionals have disagreed on whether that’s the right call. Ana Santos Rutschman, an assistant professor at the Center for Health Law Studies at St. Louis University, argued that anti-vaxx content is different than other forms of misinformation because of the public health risk.

The added difficulty is that bad actors are quick to innovate and work across platforms. On Twitter, which introduced a search tool pointing users to official information about vaccines, Storyful similarly tracked down nearly 300 posts over the past 30 days that used hashtags like #Trump2020 and #Maga. Three of the 10 most commonly shared links from the batch of tweets pointed users to Natural News, a far-right conspiracy site banned by Facebook.

“This is an ecosystem,” Rutschman added. “You put out one fire, but there’s something else raging elsewhere.”

This is What Iowans Really Care About Ahead of the Caucus