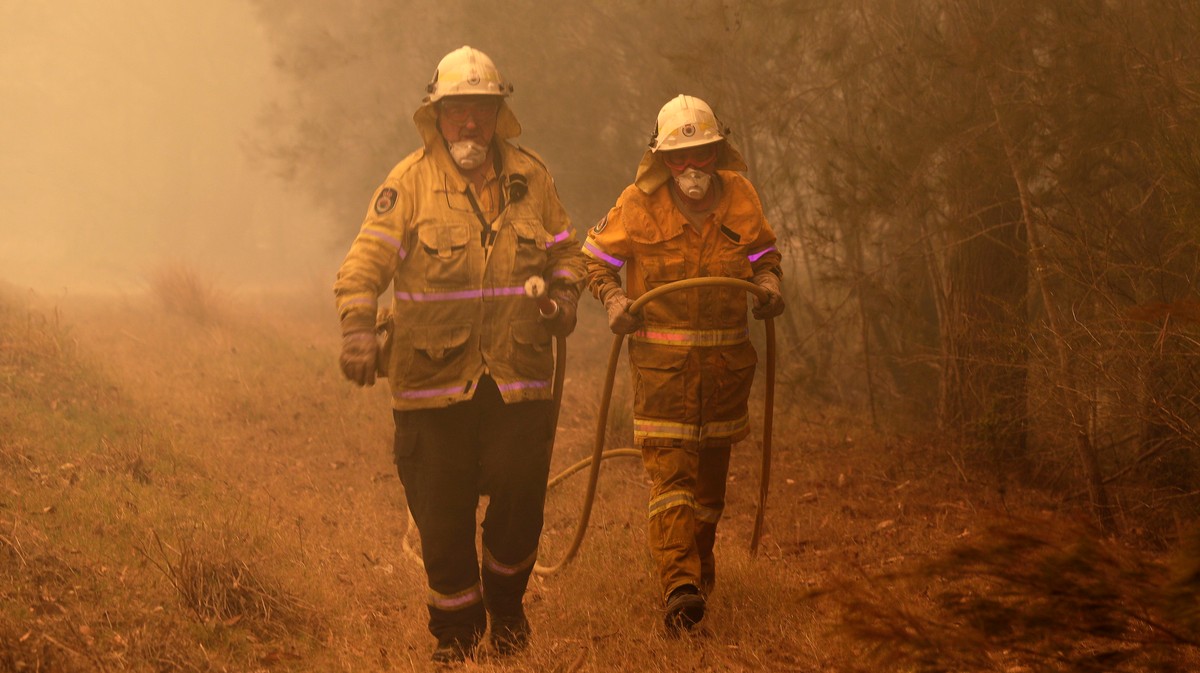 Rain in Australia’s fire-ravaged states on Monday might’ve felt like a reprieve, but officials have warned it didn’t actually do much to stop the rampant, deadly bushfires. In fact, authorities warned two wildfires — one in New South Wales (NSW), another in Victoria — could combine this week to form a “mega blaze.”

The rain served mostly to improve visibility and provide a window of time to move displaced people, but temperatures were expected to rise by Thursday, which officials warned would help fires take off again.

“There is no room for complacency,” NSW state Premier Gladys Berejiklian told reporters on Monday. “This morning it is all about recovery, making sure people who have been displaced have somewhere safe.”

Blazes in NSW and Victoria grew over the weekend, fed by high temperatures and spread by winds that propelled the flames across the country. At least 24 people have died, while some 12 million acres — an area larger than Switzerland — have been scorched. An estimated half a billion animals have been killed.

Australia has had to stretch its resources to try to fight the fires. The country has deployed troops to a level not seen since World War II and has called in the help of about 3,000 army reservists, as well as aircraft and naval ships, according to the Times.

“The government has not taken this decision lightly,” said Defense Minister Linda Reynolds. “It is the first time that reserves have been called out in this way in living memory.”

READ: ‘No way in or out’: Australians are fleeing to the beach to escape deadly wildfires

Prime Minister Scott Morrison has been criticized for how he’s handled the crisis — most notably, he was on vacation in Hawaii while the fires raged. He has since been more involved and on Monday he announced the creation National Bushfire Recovery Agency, which would receive about $1.4 billion in funding.

“It’s a long road ahead and we will be with these communities every step of the way as they rebuild,” he said.

‘This isn’t a bushfire; it’s an atomic bomb’

While the government’s response is massive and unprecedented, it’s still hard to fathom just how acute the crisis is. John Blaxland, a professor at the Strategic and Defense Studies Center at the Australian National University, told the Times the country hasn’t seen a crisis at this scale in its entire history.

“If this is the new normal, then that model is broken,” Blaxland told the Times.

READ: Australians trying to flee wildfires are getting stuck in massive traffic jams

Former Foreign Minister Julie Bishop said that while the government was doing the best it could, its plans for fighting climate change aren’t enough.

“We don’t have a national energy policy in this country and a national approach to climate change,” she said, according to the BBC.

There is a sense of hopelessness among some of the affected Australians in NSW and Victoria. The blazes keep burning and the bad keeps getting worse. Overhead, blood-red skies block the sun.

“I’ve got to be honest with you: This isn’t a bushfire; it’s an atomic bomb,” NSW Transport Minister Andrew Constance told ABC Radio Sydney. “It’s indescribable the hell it’s caused.”

Cover: Firefighters drag their water hose after putting out a spot fire near Moruya, Australia, Saturday, Jan. 4, 2020. Australia’s Prime Minister Scott Morrison called up about 3,000 reservists as the threat of wildfires escalated Saturday in at least three states with two more deaths, and strong winds and high temperatures were forecast to bring flames to populated areas including the suburbs of Sydney. (AP Photo/Rick Rycroft)

Al-Shabaab Is Escalating Its Assault on U.S. Forces in Africa