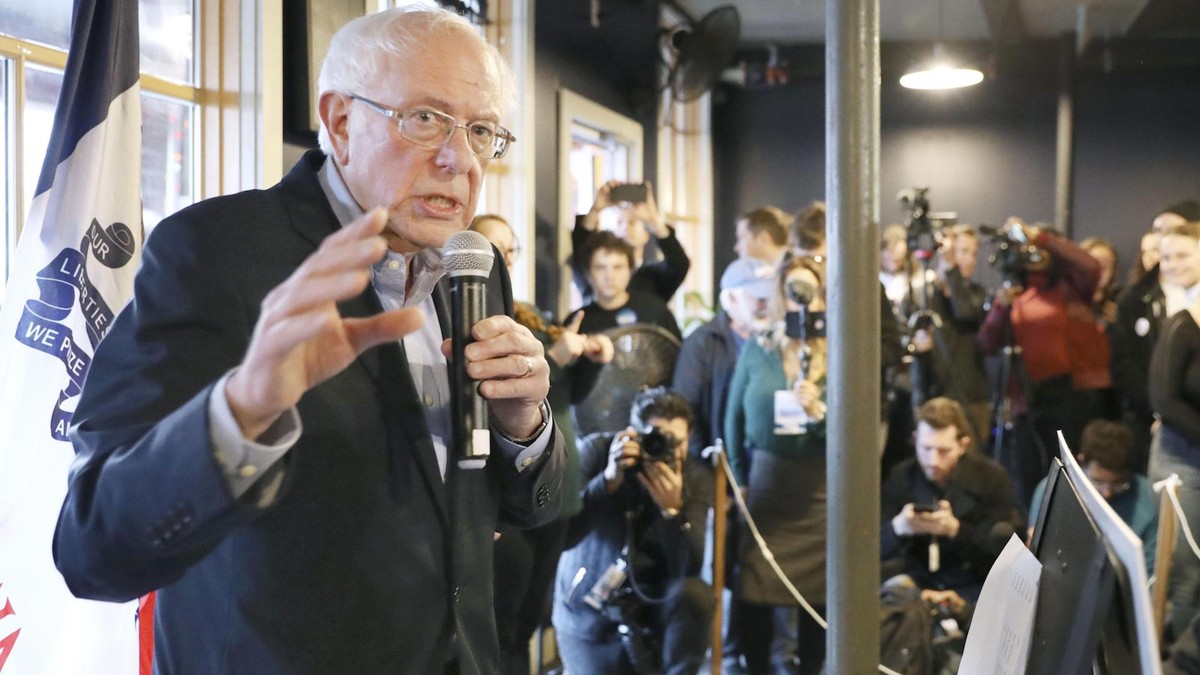 IOWA CITY, Iowa — As Bradley Hamilton got ready to go knock on doors for Sen. Bernie Sanders Sunday, he voiced cautious optimism for his candidate’s chances. But like a lot of Sanders supporters, he wasn’t so sure that the election wouldn’t be stolen.

“I know there’s a lot of bureaucratic machinations that can prevent him from winning Iowa,” the molecular biologist said, bouncing his young daughter on his shoulders. He added he thinks “Bernie was cheated” out of the nomination in 2016 and warned of “an institutional blockade to any actual left candidate gaining power in this country.”

This time, Bernie might just pull it off. And that’s triggering a lot of 2016 PTSD from all corners of the Democratic Party.

Sanders heads into Monday night’s Iowa caucuses as the slight favorite in a close four-way race. He’s currently leading the polls in New Hampshire, has pulled within striking distance of Joe Biden in national polls, and is edging up in Nevada and South Carolina.

Establishment-leaning Democrats seemed to suddenly realize that Sanders has a real path to the nomination and panicked in response. Sanders has delighted in their discomfort. “You can tell how good I feel by how nervous the establishment is getting,” Sanders declared in a campaign video released Sunday.

READ: What happens if nobody wins Iowa?

And while Sanders avoided responding directly to their new attacks, his allies have counter-punched hard as he’s repeatedly predicted he’ll win the state. The Iowa caucuses are culminating with both sides picking at the scabs of 2016 — and starting to draw new blood.

Sanders has been feuding with Joe Biden for weeks over Social Security. But the old fight really got going last week when Hillary Clinton made a series of disparaging comments about Bernie. Then a pro-Israel Democratic super PAC launched an ad that questioned Sanders’ electability and highlighted his recent heart attack.

John Kerry, who’s out in Iowa acting as a top Biden surrogate, was overheard in a Des Moines hotel lobby by an NBC News reporter discussing “the possibility of Bernie Sanders taking down the Democratic Party — down whole,” in a conversation where he speculated about jumping into the 2020 race.

The Democratic National Committee’s decision to change its debate qualification requirements to make it easier for billionaire Michael Bloomberg to qualify after its rules blocked a number of well-established Democrats from making the debate stage enraged Sanders supporters. And then a Politico story that a handful of DNC members were talking about reinstating superdelegates’ powers poured jet fuel on that anger.

That’s led to a series of clapbacks from Sanders allies.

Rep. Rashida Tlaib (D-Mich.) booed Clinton while she was onstage at a Friday Sanders rally in suburban Des Moines — and encouraged the crowd to do the same. She later apologized. But the next night in Cedar Rapids, film director Michael Moore made a point to exaggerate the efforts of a handful of DNC members, claiming the organization is “going to try to find a way to let them [superdelegates] vote on the first ballot in the convention.”

Sanders’ national co-chair Nina Turner called the appointment of some old Clinton allies to the DNC’s convention committee “a slap in the face.”

Sanders himself steered clear of these fights in his stump speeches across Iowa the last few days, and for months he’s encouraged supporters to stay away from relitigating 2016. But while his advisers downplayed the fissure, they refused to back away from the fight.

“You hear a lot of this chatter from inside Washington, and what they’re really concerned about is losing their personal power, prestige, money,” Sanders adviser Jeff Weaver told VICE News Sunday evening at a Super Bowl party for Sanders in downtown Des Moines.

“The nation’s got to come together against Trump at the end of this process. But let’s be clear: The establishment in the Democratic Party and the billionaire class can make that more likely to happen, if they play fair and don’t rig the system.”

Those tensions are so raw that two of the other candidates in the field are explicitly campaigning on their ability to move past them.

Elizabeth Warren’s final pre-caucus ad, which aired locally during the Super Bowl in Iowa Sunday night, features 2016 backers of Sanders and Clinton saying she’s the one who can pull the party together.

“We will, we must come together as a party and beat Donald Trump,” Warren declared Saturday in Cedar Rapids, getting one of her loudest rounds of applause.

“We need to look to the future, and can’t afford to get caught up in the fights from before,” Pete Buttigieg said Thursday night in Ankeny, before swiping at both Sanders and former Vice President Joe Biden by name. “Inside or outside of this party, the less 2020 looks like 2016, the better.”

That line got a huge cheer from the crowd — and would likely in any room full of Democrats. But as 2020 kicks into full swing with Monday’s Iowa caucuses, a sense of deja vu is setting in.