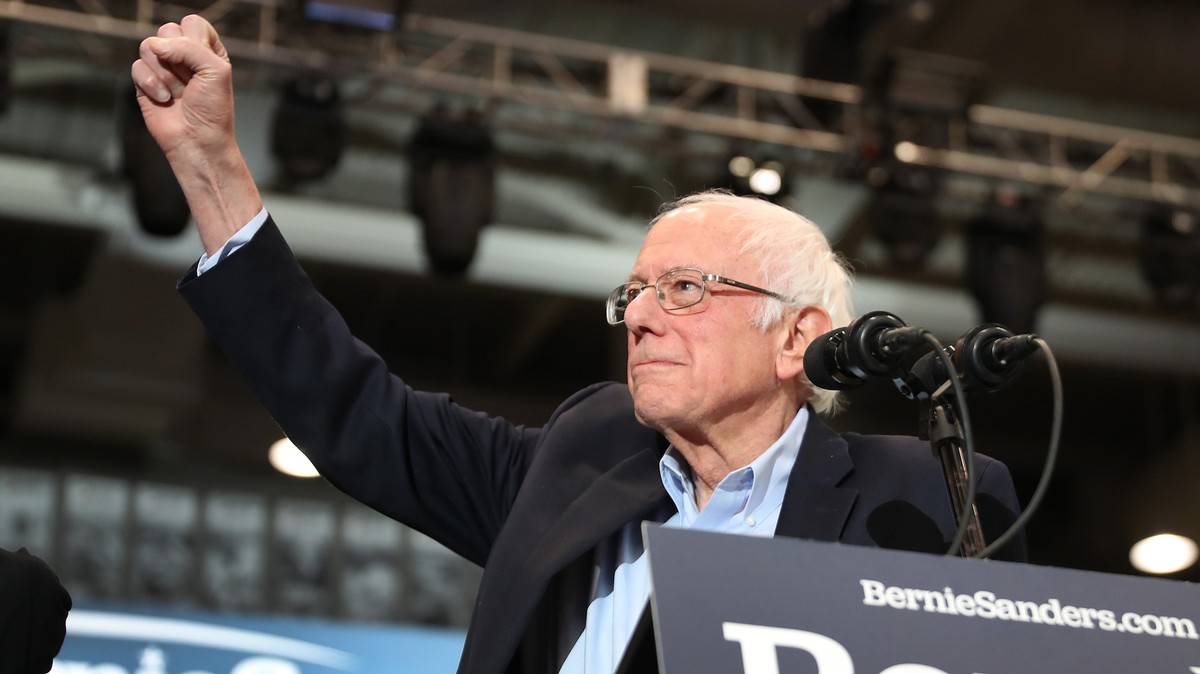 A week of polls, and an 8,000-person Monday-night rally at the University of New Hampshire point to a Bernie Sanders rout in the state he handily won over Hillary Clinton in 2016 — a welcome result for the senator’s supporters, of course, but not a surprise.

Short of an absolute blowout by Sanders, the primary will not have been a true stress test of the Vermont Independent’s campaign. He has proven to have a large enough base of dedicated supporters to win a plurality. But whether he can grow his coalition or win head-to-head will not be proven as long as the primary field stays crowded and any individual moderate candidate fails to break out.

“He has work to do,” said David Axelrod, a former senior adviser to President Barack Obama. “He’s got a high floor. It’s not clear where his ceiling is. His floor is high enough to keep him in the middle of this race, but it’s not high enough to win.”

Sanders is helped in New Hampshire by a traffic jam of moderates, especially a late surge by Sen. Amy Klobuchar, who is stealing support from Sanders’ strongest rival in Iowa, Pete Buttigieg. Polls this week showed Klobuchar rising after a strong debate on Friday night.

That surge has been reflected on the ground, too. She’s been drawing the biggest crowds of her campaign, including some 1,100 people to a Sunday rally in Nashua, N.H. Her supporters are optimistic she can draw in undecided voters, and polls have shown about a third of voters are still uncommitted.

“There’s going to be a big block of undecided voters; they’re going to break away,” Klobuchar delegate Michael Atkins said of Bernie. “That’s the bottom line, where they’re gonna go. That’s the question, and we don’t know the answer.”

Dave Lang, 56, drove from his home in Merrimack, N.H., to see Klobuchar. He used to be a Republican, until Donald Trump turned him off from the party. He’s undecided and was leaning toward Biden and Buttigieg, but Klobuchar recently piqued his interest.

“I know some of the local papers have endorsed her, and I watched the debate and I was curious about hearing directly from her,” he said. “I was impressed with her performance in the debate.”

Though Klobuchar has emerged as a formidable middle-ground candidate for people who think Biden is too old and Buttigieg is too inexperienced, her momentum may have come too late to make a realistic winning sprint in the state.

What her run definitely does is give Sanders supporters some peace of mind. Buttigieg has been the only candidate giving Sanders a real challenge, even beating him in one recent poll. But Klobuchar stealing votes from his pocket and a nasty Biden attack ad will probably flatten his support for the time being.

“The only thing that has me cautious about tomorrow is Buttigieg has done a great job with young people,” said Frank Rizzo, 70, a retiree and Sanders supporter from Dublin, N.H. “I’m thrilled that Amy Klobuchar pantsed Buttigieg at the debate. She pulled his pants down twice! And now Biden is finally growing a set and coming out with an ad. So I’m hoping that fight helps Bernie.”

Sanders’ backers, meanwhile, are emboldened after the mess in Iowa. New Hampshire state Rep. Chris Balch said Sanders supporters, himself among them, suspect the Democratic National Committee may be trying to suppress his candidacy. The irregularities, the delays; it’s enough to make them want to take to the streets if New Hampshire doesn’t turn out as they expect.

“There’s a very clear sense that Sanders needs to win, and win big, in New Hampshire.”

“There’s a very clear sense that Sanders needs to win, and win big, in New Hampshire,” he said. “If he does not, there are people that are just ready to revolt. They are not going to sit by and watch Sanders get screwed again.”

Though Buttigieg has shown he can draw young people into his coalition, his support just doesn’t compare to Sanders. A Monday night rally headlined by The Strokes drew 8,000 mostly young people, proof that his candidacy will be buoyed by his overwhelming support from people under 35.

At a rally earlier in the day at Franklin Pierce University in Rindge, New Hampshire, Jarred Perley, an environmental studies major, cheered along with a few hundred people as Sanders promised to erase student loan debt and legalize marijuana.

READ: The ACLU is coming for Biden and Klobuchar in New Hampshire

“I was on the fence for a while, but I have a lot of people that are full Bernie fans, and they’ve kind of, like, kept pushing for it,” he said. “I’ve got a single mom who’s got like six jobs, raising money to try and pay the bills, and this school education is very expensive, and I smoke weed, so I’m for Bernie.”

The size of Sanders’ potential coalition could also be contained by the presence of Sen. Elizabeth Warren and, to a much lesser extent, Rep. Tulsi Gabbard and Andrew Yang — all of whom have drawn supporters who might otherwise vote for Sanders.

And not unlike the Iowa caucus system, New Hampshire has its own quirks: 33 candidates will be on the Democratic ballot, which could absolutely lead to some confusion. New Hampshire also holds semi-open primaries, meaning any voter can cast a ballot in the Democratic primary as long as they registered as undeclared in advance.

Trump Called Bloomberg Racist for Stop-and-Frisk. But He Supported It for Years.